Climbing Towers of Prague: See the City from Above

Climbing towers of Prague and see the city from above. When you stand on Petrin Hill, you will understand why Prague is known as ‘the City of a Hundred Spires’. 14 are open for visitors and can be climbed. A forest of towers, spires and turrets stretches in front of you. Most are church towers but there are also a number of water towers. Government buildings and museums are often embellished with elegant spires. The tower that defines Prague’s skyline is the Zizkov television tower, rising 216 meters into the air. The most elegant turrets and spires can be found on Tyn Church on Old Town Square. 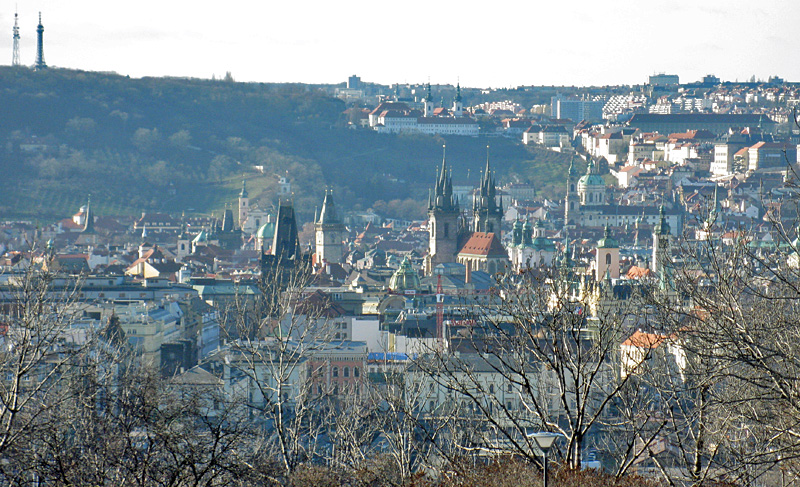 Towers of Prague: List of 14 towers you can climb to see the city from above

Climbing Towers in the District of Mala Strana

This twin brother of the Eiffel Tower in Paris was built for the Jubilee Exhibition of 1891. This tower is only 60 meters high and stands on Petrin hill. Together with the height of the hill, this tower is as tall as the real Eiffel Tower. Read more about the Petrin look-out tower.

This bell tower is right next to the St Nicholas Church and is the same height as the dome of the church. The tower is not owned by the church, but by the Mala Strana district. During the Communist regime, the tower served as an observation post for the state police that kept an eye on the nearby embassies of Western countries.
In the Middle Ages, the tower keeper lived halfway up the stairs. He had a modest income, but it was a steady job. Still, staff turnover among tower guards was quite high, because spending the winter in a cold tower was no fun. Read more about the St Nicholas Church in Mala Strana.

3. Charles Bridge, bridge tower on the Mala Strana side
April to October 10 am-6pm

On the Mala Strana side of the Charles Bridge is the 43.5m high Mala Strana bridge tower, which is connected by a footbridge to the smaller Judith Tower. Besides climbing the tower, you can see an exhibition telling the eventful history of Charles Bridge, and the many invading armies that crossed the bridge. The view from the tower on the bridge and the old town is most rewarding. Read more about Charles Bridge. 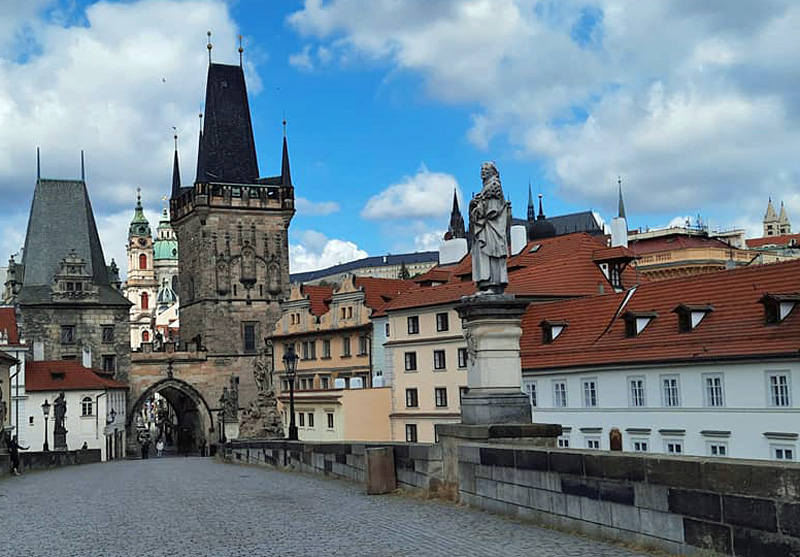 In the District of Hradcany

If you climb only one tower in Prague, be sure it is the Great South Tower. The viewpoint is reached via a narrow spiral staircase with 287 steps. Halfway, you will see the Sigimond Bell that weighs 16 kilos and is the largest church bell in the Czech Republic whose sound can be heard on church holidays and during events. At a height of 93 meters, the view is fascinating. Read more about  St Vitus Cathedral. 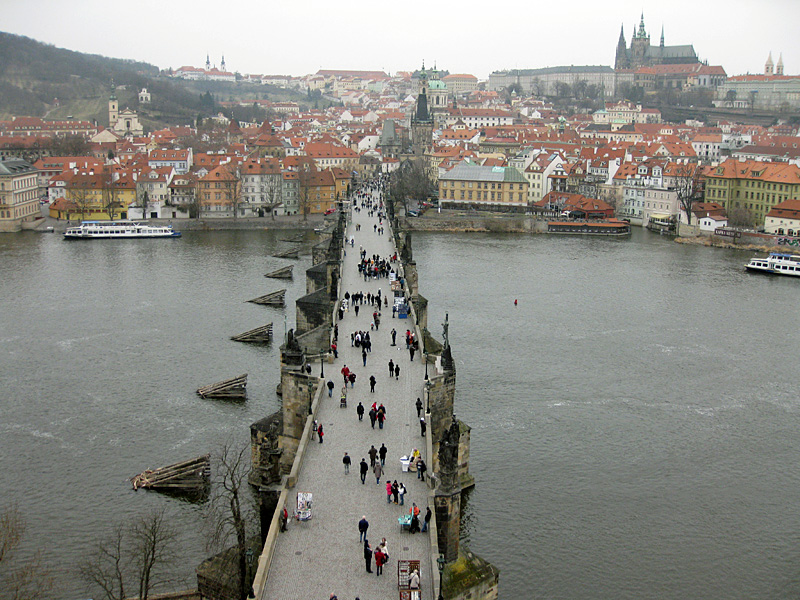 Climbing Towers in the District of Stare Mesto

Climbing towers in Prague must include the Old Town Hall Tower because the view of Old Town Square is amazing, especially when the Easter or Christmas markets are held on the square. This 70-meter-tall tower is Prague’s only medieval tower.

The 43-meter-high bridge tower is the entrance to Charles Bridge. This was also the triumphal arch that the future king passed through on the way to St Vitus Cathedral for his coronation ceremony. The slight kink in Charles Bridge is clear to see from the tower.More about Charles Bridge. 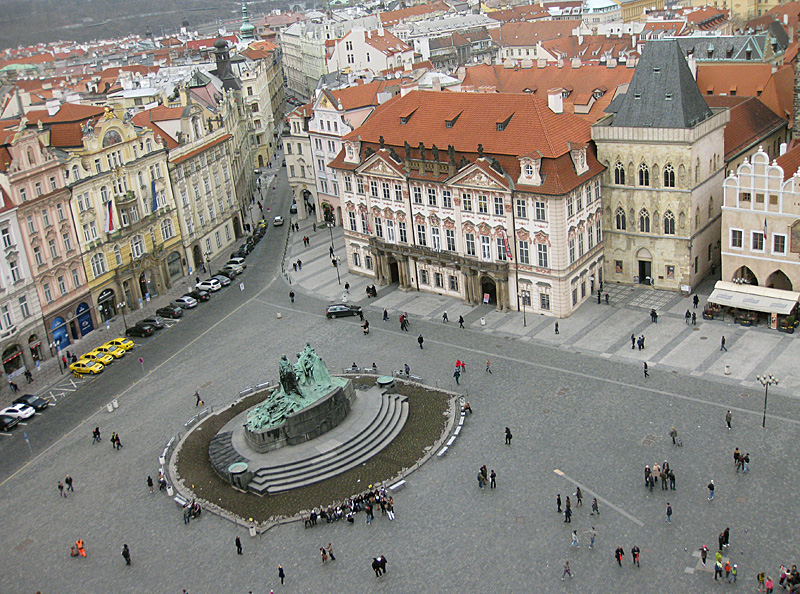 The astronomical tower is 52 metres tall, a steep spiral staircase with 172 steps takes you up. Initially, the tower served as a viewing tower, but in the mid-18th century, astronomical devices were placed here. The tower was used for astrological observations until the 1930s, after which the astrologers moved to the new observatory in Ondrejov (35 km southeast of Prague). The tower is still used for meteorological and climate measurements. From 1842 to the 1920s, a flag was flown at exactly noon so that everyone knew the correct time. Read more about  Clementinum.

The Powder Tower (Prasna Brana) was originally the entrance to the Stare Mesto district, but in the seventeenth century it was used for the storage of gunpowder. The tower was designed after the example of the Old Town Bridge Tower. It was never a defense tower but served to embellish the adjacent royal palace, which stood on the site of present-day Municipal House. The tower is 65 metres tall and the viewing platform is at 44 meters. You go up via a spiral staircase with 186 steps. There are several floors with impressive the stained glass windows. There is also a permanent exhibition about the Hussites, followers of Jan Hus, forerunner of the Reformation, who ended at the stake.

Jindrisska Tower is a ten-storey freestanding bell tower belonging to St Jindricha and Kunhuty Church. There are three bells and a carillon that plays one of the more than a thousand melodies four times a day. The viewpoint is at a height of 65 metres. There is also an exhibition space with rotating exhibitions and a souvenir shop. Restaurant Zvonice (Czech for clock tower) is spread over three floors. The eye-catcher is the Holy Mary Bell right in the middle of the restaurant. Lunch or dinner under authentic wooden beams with a beautiful view over the city is welcoming change from the usual Prague restaurants.

The New Mill Water Tower supplied the Nove Mesto district with water and was built in the seventeenth century. You walk up steep stairs to enjoy the view, which is a bit disappointing when you get to the top as the tower is surrounded by buildings of the same height. Along the way you will pass several rooms with exhibitions about the many fires that have ravaged the city, about the fire brigade and the water supply of Prague. 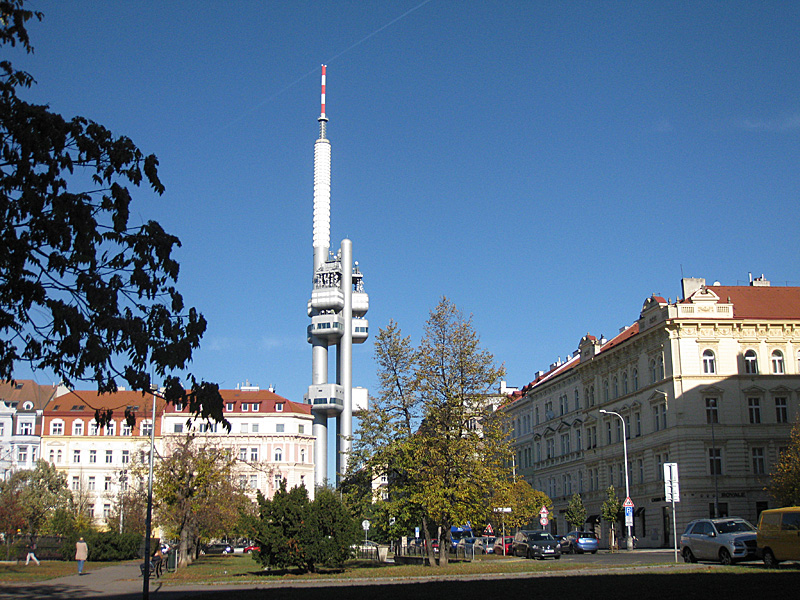 In the District of Zizkov

The viewing platform of the Prague television tower is located at a height of 95 meters offering a panoramic view of the city. The Czech artist David Cerny embellished the exterior of the tower with climbing giant babies. Below the viewing platform is a restaurant and a bar. Above the restaurant, in one of the cubicles clinging on to the tower, is a super-the-lux one-bedroom hotel. With a total height of 216 meters, the Zizkov Television Tower is the tallest structure in Prague. Read more about Zizkov television tower. 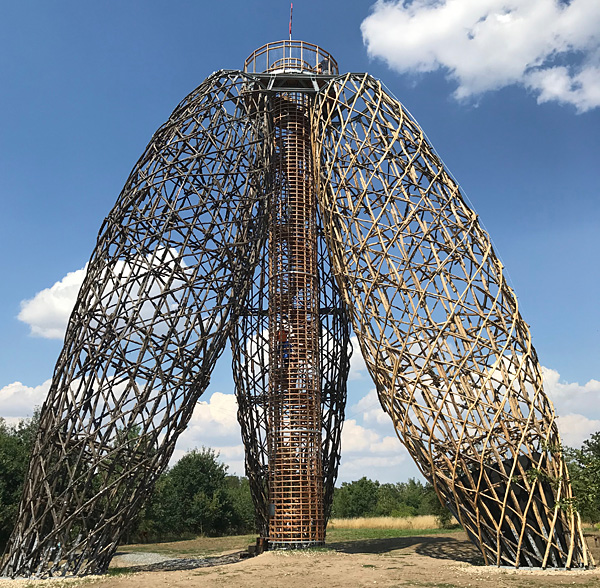 In the District of Podoli

1. Viewing platform of Podoli waterworks, Podolská 17, Podoli, Prague
Thursday 13.00-18.00
Unique view from the south on the Vltava and the Castle. The viewing platform is part of the Podoli museum where you can learn everything about Prague’s drinking water supply. It is mandatory to buy your ticket in advance via nfveolia (in Czech only) or via tel number +420 272 172 345 or email: jiri.dejmek@pvk.cz

In the District of Kosire

Park Cibulka is sandwiched between the districts of Motol and Jinonice. The observation tower is located in the north-eastern part of the park. It is built of stone as a folly. This square tower is thirteen meters high and crowned with battlements. A staircase with 76 steps leads up. The view is a disappointing; to the north is the Motol hospital complex, to the northwest the residential area of Řepy, the east the TV tower in Strahov and beyond that Prague centre. Large trees obstruct the view to the east. The best time to climb this look-out tower is in winter when the trees have no leaves.

In the District of Cerny Most

North-east of Prague centre, sandwiched between the districts of Cerny Most, Hostavice and Kyje, lies the Klanovice-Cihadla nature reserve with a very special look-out tower. The tower is in the shape of a pyramid and made of acacia wood. It is a rather wobbly construction but completely safe to climb. 98 steps lead to a viewing platform at a height of 20m. The lookout tower is close to Kyjsky pond where you can park your car. From here it is a ten-minute walk to the tower. If you use public transport take bus 181 from Cerny Most metro station and get off at the Kyje stop. The Doubravka Look-out Tower is a short walk away. 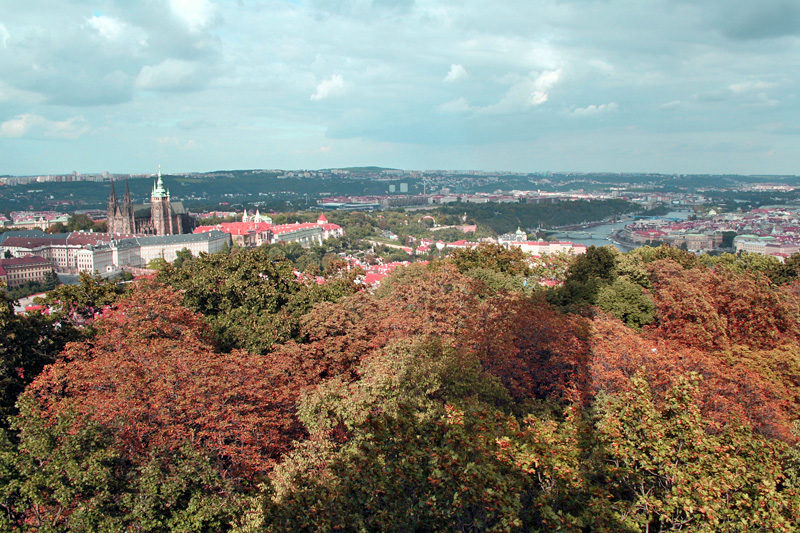