David Cerny is a Czech sculptor known for his controversial and provocative installations and sculptures. Subtlety is not his strongest point. His art provokes and shocks society. It is a wake-up call that shows the absurdities of life. Many of his installations and sculptures are in public places not only in Prague and in Czechia but also abroad.

In 1991, he became famous by painting pink a Soviet tank that served as a war memorial in Prague. However, Cerny is probably best known for the sculptures of giant babies that inch their way up the Zizkov Television Tower in Prague. Many of his works have permanent places in Prague or elsewhere but there are also works of art that disappear from public places or are on loan to galleries or cities all over the world.

An erected middle finger bobbed only for a while on Vltava in Prague, a sculpture of Saddam Hussein in his underwear floating in a water tank was banned in Poland and in Belgium and a slowly revolving giant red skull attached to a crane on the roof of Dox Contempory Art Museum in Prague have all disappeared. 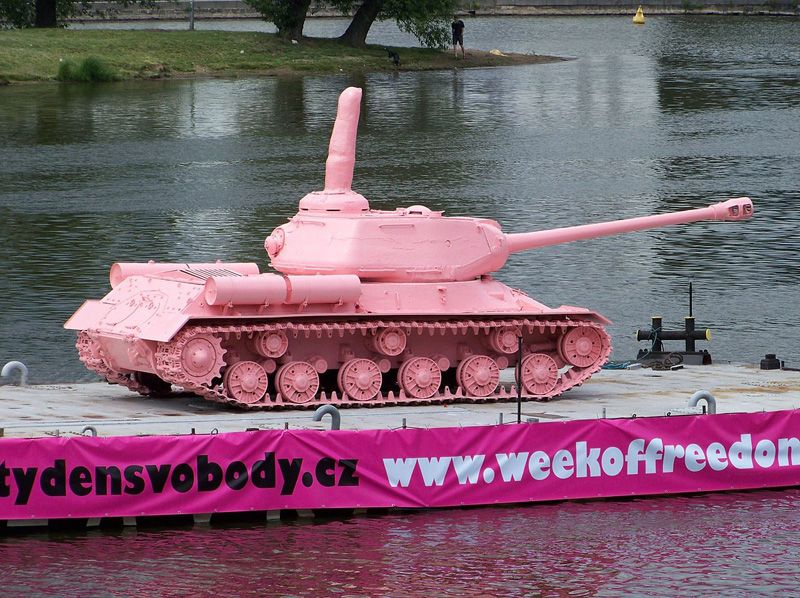 David Cerny and the Pink Tank

A Russian tank, painted pink, made David Cerny famous overnight. This Soviet tank, camouflaged in the colour olive green, marked the spot where Soviet troops had liberated Prague and Czechoslovakia from Nazi Germany in May 1945. After Cerny painted it pink, the tank kept the minds busy and heated discussions ensued. The international press made it a topic of conversation worldwide. However, the Czechoslovak and Russian governments were not at all amused and considered it as an act of civil disobedience and vandalism and Cerny was briefly jailed. In the end the tank was painted olive green again. The Pink Tank returned to Prague for a short time in June 2011 to commemorate the twentieth anniversary of Soviet occupation. Cerny added an erect middle finger. The tank was put on a barge and floated on the Vltava.

Address: The Pink Tank is now at the Military Technical Museum Lesany in the town of Tynec nad Sazavou about 20 kilometers south of Prague

Saint Wenceslas sits on an upside down, dead horse that dangles from the ceiling in the Lucerna shopping arcade. This installation is a parody of the equestrian statue of Saint Wenceslas on Wenceslas Square. Cerny never gives public comment on his works, but this work of art can be interpreted as a strong criticism of Vaclav Klaus, former Czech president. The installation was originally intended for the post office which newly opened in 1999, in Jindrisska Street. The director said that ‘this cannot be done’, without explaining what could not be done. The horse ended up in the Lucerna passage.

K for Kafka is a kinetic sculpture of 11 meters high consisting of 42 rotating discs. When falling into place, these discs show the head of the writer Franz Kafka. The concept is not new. Cerny made another rotating head, Metalmorphosis, which is his own head that functions as a fountain. K for Kafka refers to Franz Kafka’s novel: the Transformation (original German title Die Verwandlung). One day the main character wakes up transformed into a man-sized insect. Why, he wonders, is it because of the difficult relationship with his father or is he not the perfect employee? His family wants to get rid of him. Even though he is now an insect he understands everything his family says about him, he decides to free his family from his presence.
Address: at the back of Quadrio Shopping Centre

Look up otherwise you will miss Man Hanging Out. A man dangles from a pole high above the heads of the pedestrians in the street below. His hand in his pocket, striking features, a mustache, pointed beard and round glasses, this man is unmistakably Sigmund Freud. Cerny made this sculpture in 1997. The question it evokes is: what role is there for intellectuals in the new millennium. It hints at man’s hopelessness and powerlessness in the modern world. However, the man may save his life by pulling himself back onto the roof. In 2007, when the sculpture was exhibited in Chicago, passers-bye were convinced it was a suicide and called the emergency services. In 2009, when it was in Seoul the same happened.
Address: Perstyne street at the corner of Jilska and Husova streets.

A pink blob, glowing a deeper pink when it is dark, hangs on a drainpipe at the facade of the na Zabradli Theater. When studying this blob more closely, you will discover that it is a fetus. The unborn tries to squeeze through the narrow pipe. Embryo very likely refers to the narrow-minded and bourgeois attitude of many when meeting with an artist.
Address: Na Zabradli theater, Anenske namesti 5

Quo Vadis is a bronze sculpture of a four-legged Trabant car. This work recalls the mass exodus of East Germans who camped in the garden of the German embassy in Prague in 1989 while waiting for permission to travel to the free west. Many had come to Prague in their Trabants, which they left in Prague after their departure for West Germany. The Trabant not only has legs but also balls.
Address: in the garden at the back of the German embassy in Vlasska 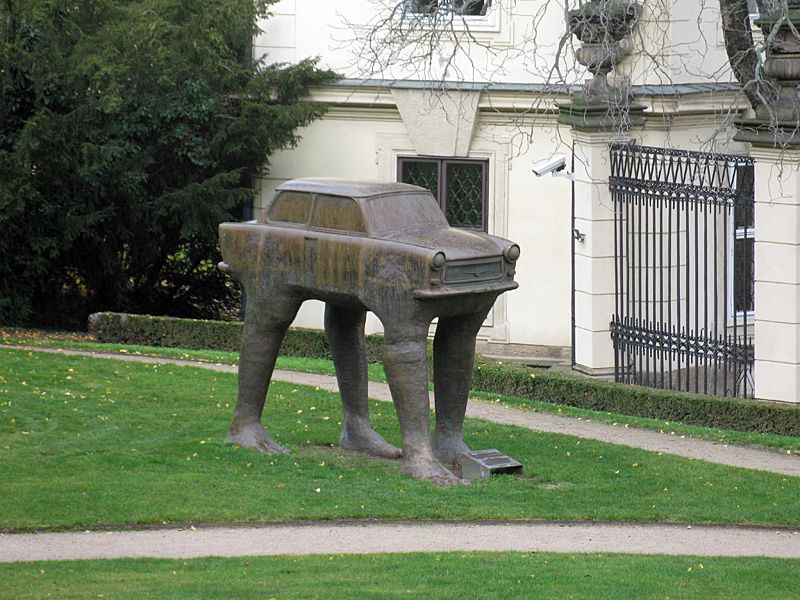 Ttwo bronze mechanically rotating men urinate in a puddle that looks suspiciously like the map of the Czechia. They pee while turning their upper torsos and raising their penises. The stream of piss writes quotes from legendary Prague residents. Send a text message to the number indicated on a display near the installation and the men will write your message while pissing.
Address: In front of the Kafka Museum, Cihelna 2b

Ten giant babies inching their way up are the eye catching feature of the Zizkov television tower. They are inhuman and have bar codes instead of a faces. The statement Cerny wanted to make is: dehumanization of society. A number is given to everyone and the person himself is of secondary importance. Cerny used the most precious thing humankind possesses: babies, but babies with bar codes instead of human features.

They climb a structure which was once a symbol of the Communist era, a structure that jars the beauty of the Prague skyline and was intended to jar West-German radio transmissions. However, the tower became operational only after the fall of Communism. The infants are unable to reach adulthood. They are stopped by this landmark that represents totalitarian rule.
Three identical crawling babies stand next to Kampa museum near Charles Bridge if you want to see them from close by.
Address: TV Tower, (Tower Park Prague), Mahlerovy sady, Kampa Museum, U Sovovych Mlynu 2

Trifot is a walking monster with a head that consists of a set of cameras. This monster is 12 meters tall and stands on tripod legs. Its head consists of a number of old-fashioned cameras. The Trifot has several eyes that keep a close look on passers-bye and project their actions on four screens. Don’t worry because the images are not saved. The installation symbolizes ‘Big Brother’ but in a slightly different way than in the novel 1984 by George Orwell. Today, mobile phones have enabled us to take photos of anyone anywhere. No amateur photographer asks permission of the people in his/her photos.
Address: close to metro station Butovice, metro line B.

Two naked bodies cut into two lean forward against a wall in the garden of the Futura Centre. Climb up the ladder and watch in their anuses a video about Vaclav Klaus and the former curator of the National museum while listening to ‘We are the champions’ and watch the two men eating their food in a disgusting way.
Address: Futura Centre for Modern Art, Holeckova 49, opening times: Wednesday to Sunday 11.00 – 18.00 hours 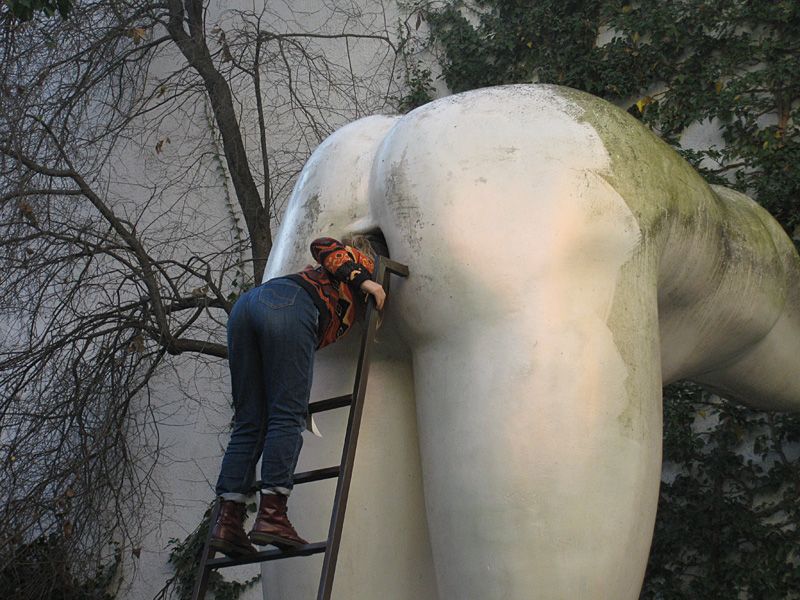 Pegasus consists of three kinetic sculptures: half horse half aircraft engine. The work refers to the past when the Waltrovka company built aircraft engines on this site. Josef Walter was the founder of Walterovka factory in Jinonice, a Prague suburb. The company manufactured air-cooled aircraft engines. After the Second World War, it became one of the biggest factories of Central Europe and changed its name to Motorlet. After a take-over in 2008, the plant was no longer in use and developers stepped in. They replaced the former factory ground with office buildings, shops and apartments and named it: Waltrovka Residence.
Address: Jinonice near metro station Jinonice on metro line B.

Two red cars hang on large nails on the facade of the MeetFactory, a disused glass factory in the Prague district of Smíchov. MeetFactory hosts alternative events: music, theater and modern art exhibitions. Cerny’s installation is a symbol of excessive consumption, of too much food on our tables: two red cars hanging out to tenderize like meat. Another interpretation is that the two cars are trophies indicating people’s need to boast about their social status.
Address: MeetFactory, ke Sklarne 15 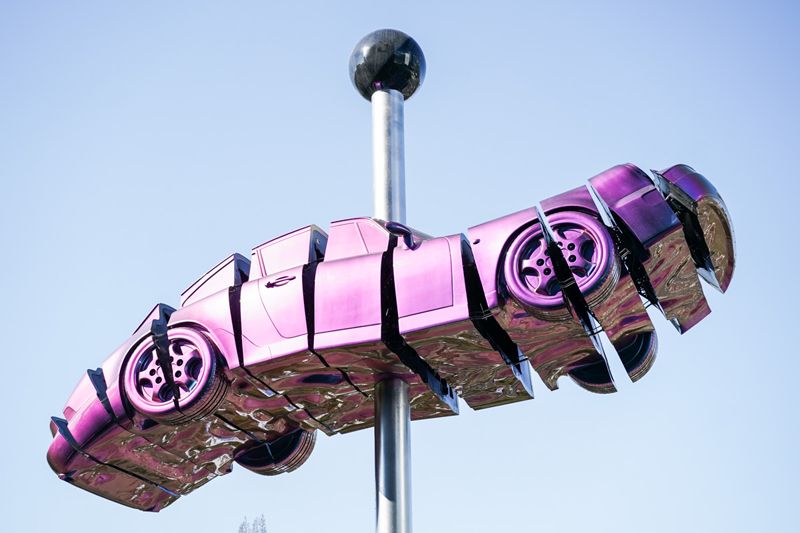 Brouk, beetle in English, is a crumpled Porsche 911 impaled on a large pin. The artwork consists of eleven hydraulically controlled disks and is reminiscent of a pinned down insect in an entomology collection. David Cerny placed the sculpture close to a highway on purpose. ‘Brouk’ symbolizes Cerny’s love, almost an addiction, to the iconic Porsche 911.At the same time, Cerny criticizes a society that is obsessed with cars. The artwork is almost 17 meters high, eight meters long and three and a half meters wide . It is located next to the BB Centrum Alpha office building in Prague 4 on Vyskočilova Street near the exit of the 5. Května Street. Take metro line A to Zelivskeho and get on bus 124 here to stop Brumlovka.

David Cerny (1967 – present) is a Czech sculptor whose works contain controversial elements that entertain and confuse. Nationalism, consumption and communism are repetitive themes in his works. He studied at the Academy of Arts, Architecture and Design in Prague. In 1991 he gained media attention when he painted Soviet tank that served as a war memorial pink. He works in many disciplines sculpture, installation, performance and video. A total of eleven of his works can be seen in many locations in Prague. Best-known are the giant babies on the Zizkov TV tower.

In 1996, he won a grant from the Pollack Krasner Foundation in the USA. In 1990, he received a special prize at the biennale in Kortrijk, Belgium. In 2000, he received the Jindrich Chalupecky award for the country’s most promising visual artist aged under 35. David Cerny has taken part in many exhibitions, including London, Rotterdam, Berlin, Poznan, Brussels and Chicago. 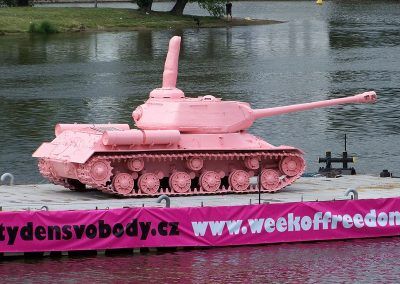 2011 Pink Tank on the Vltava River 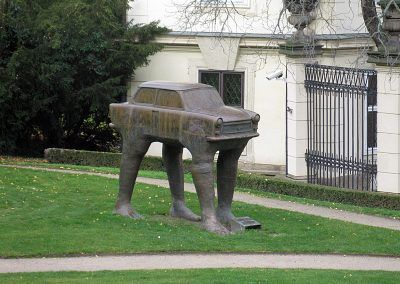 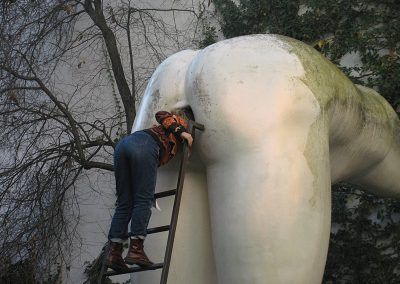 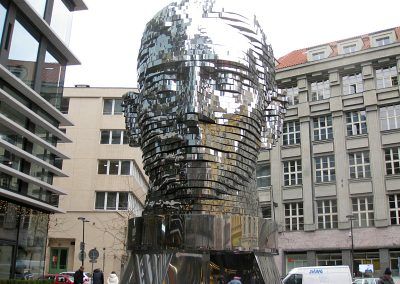 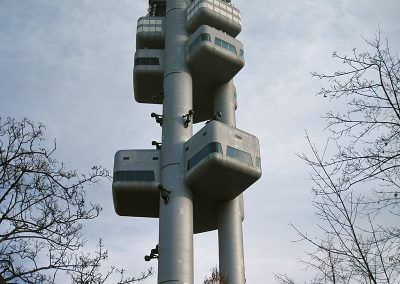 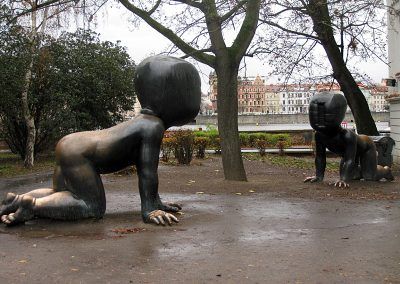 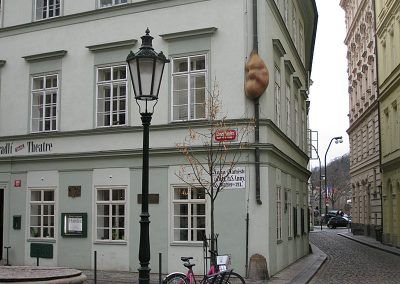 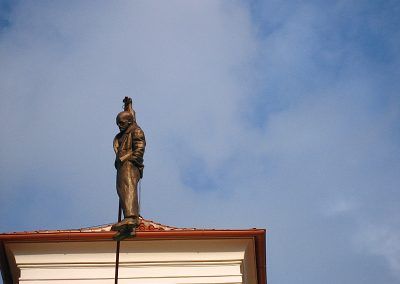 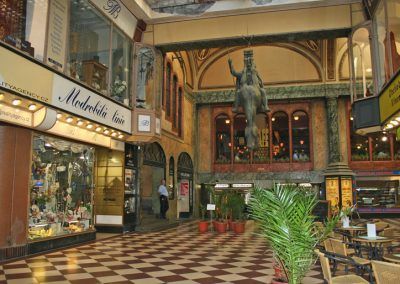 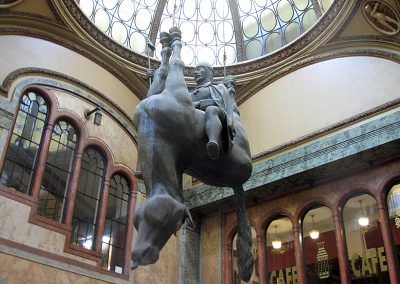 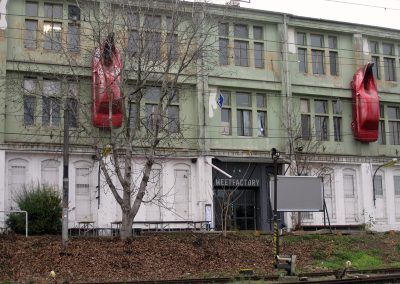 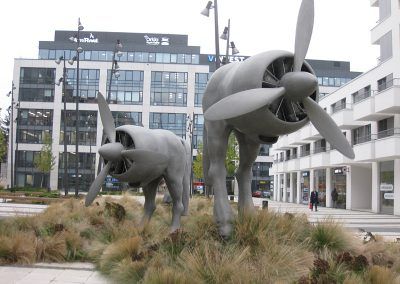 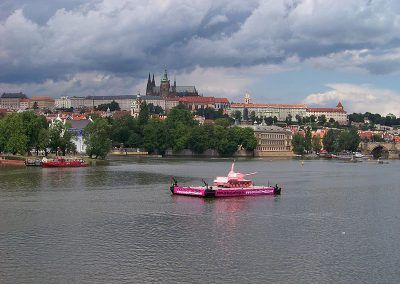 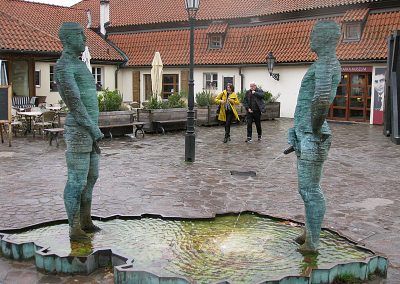 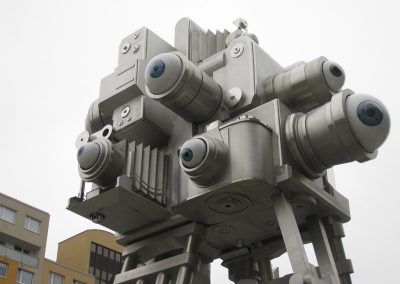 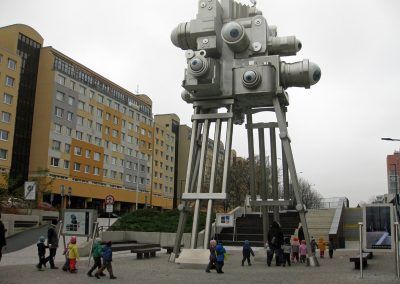