City walk starts at Charles Bridge and ends at Strahov Monastery. This walk takes you along Nerudova and Uvoz streets, two of the most beautiful streets in Prague lined with baroque palaces and impressive buildings. This city walk is the perfect alternative if you want to see more of Prague than the historic centre, Old Town Square or Wenceslas Square. Nerudova Street goes gradually up hill. The higher you get, the more beautiful the view of Petrin Hill. Imposing palaces and impressive Baroque houses sparkle in the sun. Pay special attention to the many house signs on the facades of most buildings. 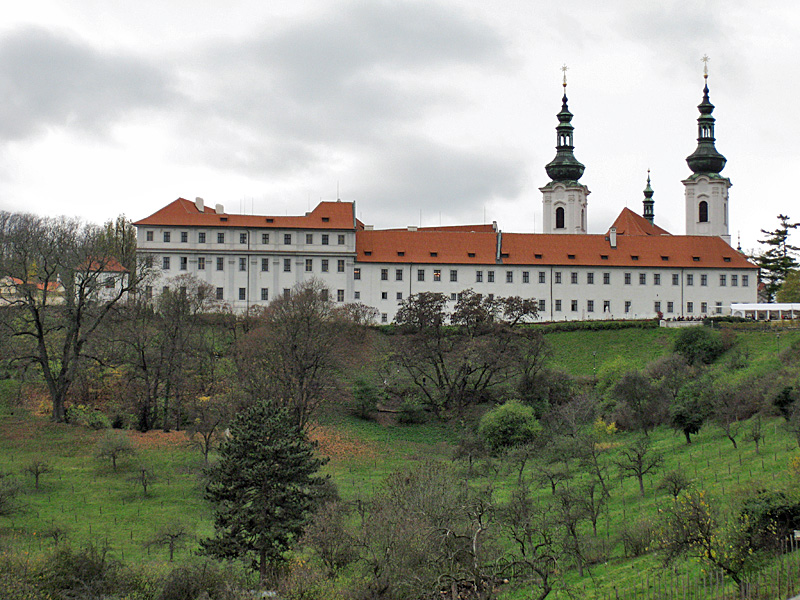 1. Walk across Charles Bridge
2. Pass under the Bridge Tower
3. You are now in Mostecka street, full of souvenir shops and tourists
4. At the corner of Mostecka street and Malostranska Namesti (square) is St Nicholas Church
5. Cross Malostranska namesti diagonally and you will get to Nerudova street
6. Walk up Nerudova Street
7. Halfway the street changes name and is named Uvoz.
8. At the end of Uvoz, take the Raoula Wallenberga promenade on your left. It is opposite house number 40. Keep walking straight on.
9. You are now on Strahovske nadvori with the Strahov monastery and library.
10. Walk straight across the courtyard, under a gate and turn right onto Pohorelec Street, bear to the left and you will see tram 22 stop 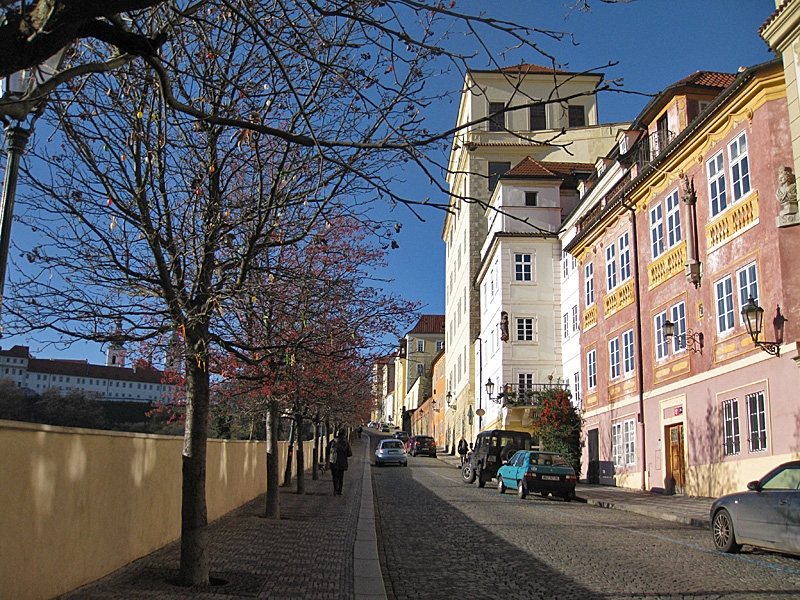 City Walk Nerudova: what to see

1. Charles Bridge is the most famous bridge in Prague and connects the Stare Mesto district to the Mala Strana district. The statues of saints on the bridge railings are all replicas because the originals weathered badly. In the middle of the bridge is the statue of Saint Nepomuk, easy to recognize by the halo with stars. The two bridge towers on each side of the bridge can be climbed for a spectacular view. Read more about the Charles Bridge and climbing towers 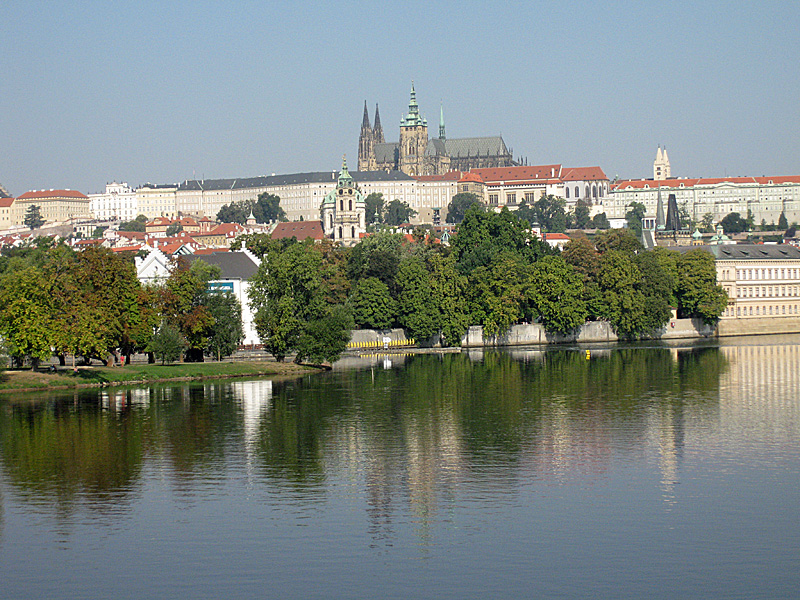 3. Mostecka Street, Bridge Street, connects Charles Bridge with Malostanske namesti. The towers and dome of the St Nicolas Church loom at the end of the street. Immediately to the left after the bridgehead you will see a few Renaissance houses. Noteworthy are house numbers 4, 11, 15 which is a palace, now the embassy of Serbia, and 20.

*Mostecká 4, at the House of the Savior
The house at number 4 was originally two smaller houses built in the late Middle Ages, in the sixteenth century the interiors were joined together into one house but with two facades. The blue house has a baroque facade. Above the door is a small niche with a statue of the Saviour. The pale-yellow house, also number 4, is the house iat the Bear in Chains as can be seen on the gable stone. Tradition has it that a rich widow fell in love with a bear tamer who died before they could get married, but the widow had already ordered a gable stone. After lover’s death, she added a gold chain as a symbolic wedding ring.

*Mostecká 11, at the Black Eagle
This is a medieval house with a Baroque facade, and two eagles above the windows on the second floor. An eagle was an imperial symbol and very appropriate because an archbishop lived in the house.
On the eaves is a statue of Saint Florian, a Roman army officer who lived in the third century. He freed dozens of enslaved Christians and was martyred for this, with a stone around his neck he was thrown into the water. He is the patron saint of firefighters and his statue is often placed on top of houses to protect against fires.

*Mostecká 20, at the Three Golden Rings
The house sign above the door shows three intertwined rings that form a chain. A loving father had the gable stone made after his three daughters got married. In this way he closed his daughters in his heart forever. Others claim that the three circles symbolize the mystical circle of life: birth, maturity, and death. 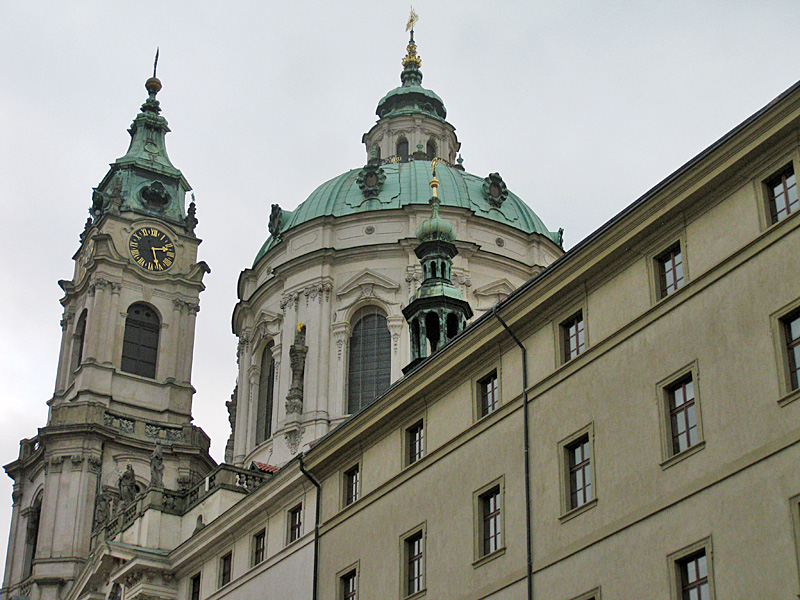 5. Nerudova Street is named after the Czech writer, poet and journalist Jan Neruda (1834-1891) who lived at number 47, ‘in the two suns’. His best-known work is Povídky malostranské, a collection of short stories about the Mala Strana district, in which he describes daily life in this Prague district in the 1940s with his typical codes of conduct.

House signs show the profession or symbolize the names of the residents. The following is a selection of interesting house signs. More about house signs. 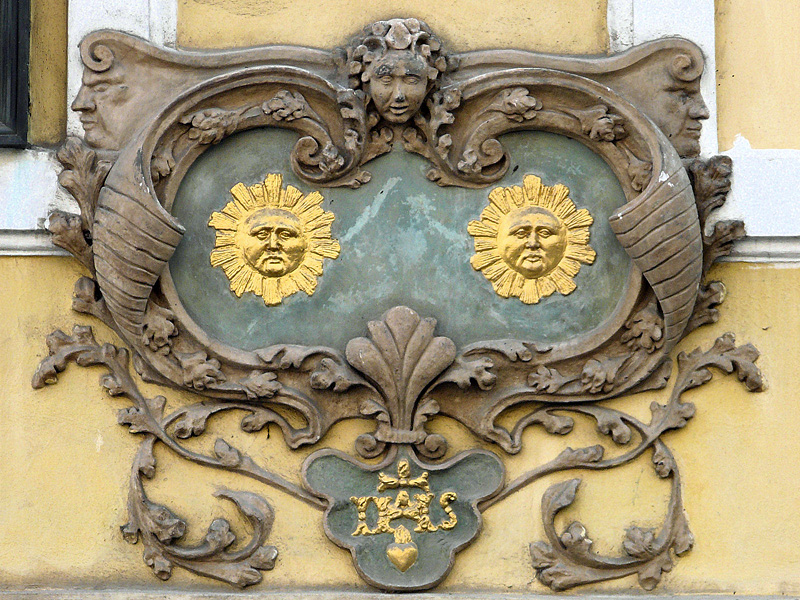 6. Uvoz street has houses with baroque facades on one side only. The other side offers a wide view of Petrin Hill and Petrin Look-out Tower. Walk up the path opposite house number 40. From here an impressive view of Strahov Monastery.

8. The Miniature Museum exhibits tiny works of art that can only be seen through a microscope. On display is the smallest book in the world: ‘The Chameleon’ by Anton Chekhov. More about the miniature museum.