This Prague city walk takes you to the Bohnice district in the north of Prague and includes an abandoned cemetery, a pet cemetery and a walk in the large park of the Psychiatric Hospital. The city walk ends in the sídliště Bohnice, a housing estate with identical housing blocks. Here you will see the longest residential block of flats in Prague, three hundred metres long with eighteen entrances. Bohnice neighbourhood is off the beaten tourist track and you will meet virtually no tourists. The character of the district is completely different from the Baroque and Art Nouveau centre of Prague. Sídliště Bohnice is where ‘ordinary’ Praguers live. 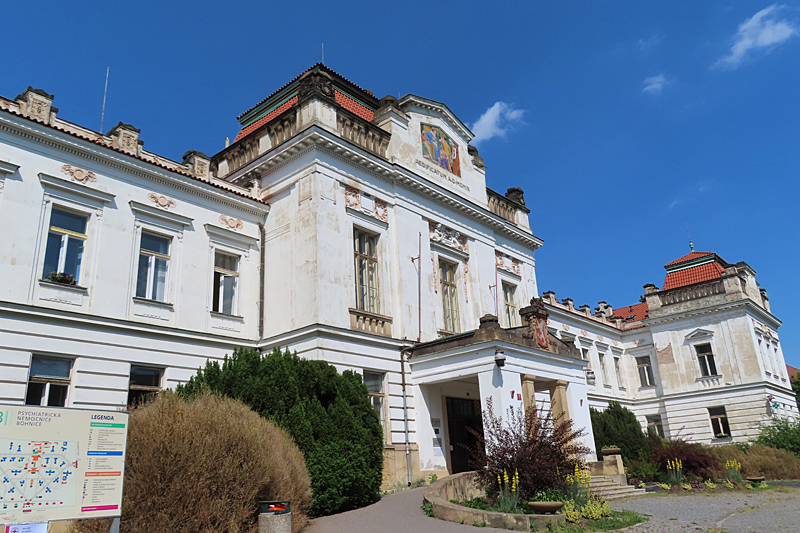 Zhořelecká has the longest ‘panelák’ in the Czech Republic. This residential block of flats is composed of prefabricated building components that are assembled on site, it is 300 metres long and has 18 entrances. A row of tall residential housing blocks forms a belt around Prague in the north. In the 1970s and 1980s when many of these housing estates north of the centre were built, an urban legend arose. These rows of high rise buildings were said to have been built on purpose to form a barrier to a possible nuclear attack on Prague. 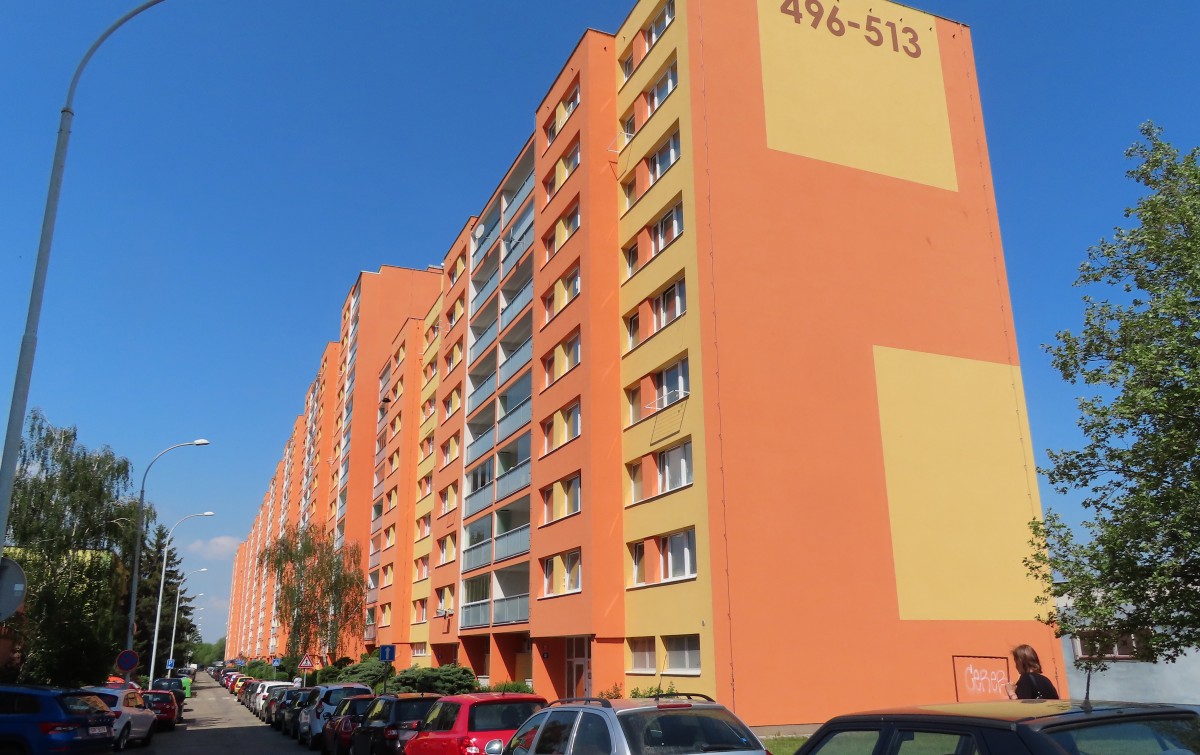 4. Retrace your steps and turn left into Radomska, cross Zhořelecká
5. Walk straight ahead, you are now in Bohnicka
6. Next to the Cukrarna u Myslivce, take a path to the farm and make a loop via k Farkam and u Stalky streets
7. Continue Bohnicka, walk past Saints Peter and Paul Church

When the altar was renovated at the end of the eighteenth century, a lead box was discovered containing the founding deeds of the church, in which the Bishop of Prague confirmed the consecration on 30 May 1158. Little is left of this original Romanesque church.

* Zámek Bohnice
Zámek Bohnice is behind the church. It is a late eighteenth century one-storey building, with a mansard roof and a turret. At the beginning of the 19th century, it got its classicist style look. Bohnice Zámek is part of the Psychiatric Hospital and is not open to the public.

* Vranich Farm
The farm is located on the village square where also the bus stops. On the façade it says 1777, probably the year of renovation, because the cadastral number shows that the farm is much older. The stucco buildings are arranged around a courtyard in the shape of the letter V. Access to the courtyard for vehicles is through a semicircular gate. Pedestrian enter through the gate next to it.

*Bohnice Cemetery
Most of the 4,000 headstones in Bohnice Cemetery are overgrown with ivy, and the small chapel is in ruins. The last burials took place in 1951 and the cemetery has been abandoned since 1963. The Psychiatric Hospital buried about forty patients a year here. Prisoners from the First World War and victims of the typhus epidemic in Eastern Europe just before the First World War were also laid to rest here. 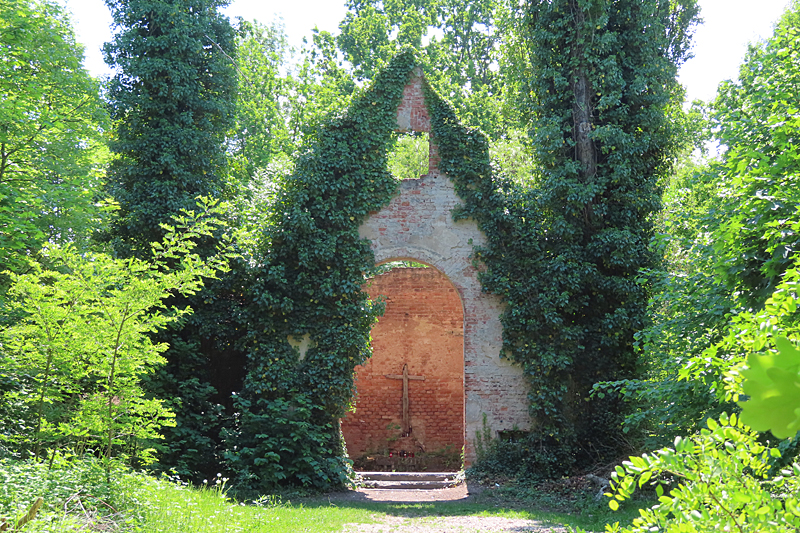 *Pet Cemetery
The pet cemetery looks a like a jungle because the pet owners seem to have forgotten their loyal friends. The last burial was in 2006. Every pet owner was allowed to plant a tree for their pet. The graves resemble miniature fenced gardens. The trees are now fully grown and stand guard like giants. At one grave you will find the beloved dog’s piss pole, at another the Pyramid of Cheops. A large grave commemorates two German Shepherds with a pile of tennis balls next to it.

12. Walk back to the-junction
13. Bear to the right and you will see two entrance gates to the Psychiatric Hospital. The first turns to the left and goes to the farm, the second goes straight to the main entrance. You can take either.

Alternative route if this back entrance is closed
* Walk back to the church
* next to restaurant Weranda, take Ustavni, the main entrance of the Psychiatric Hospital is on this street

* Bohnice Psychiatric Hospital dates from 1903. The buildings are surrounded by park. The Hospital grounds resemble a small village. Early twentieth century, this was the largest metal hospital in Europe. There are about thirty pavilions and houses that are interconnected by paths bordered by age-old trees, linden, chestnut, maple and spruce.

* Kavarna v Kolona serves simple dishes and drinks from 12:00 to 18:00, and is open to patients and visitors. Patients work here as the job is part of their therapy. On the west side of the park is the farm for sociotherapeutic treatment and hippotherapy. Several times a year, the psychiatric hospital organizes festivals organized by the patients with the help of the staff: Mezi ploty, Babí léto and Legendy.

* The main building is reminiscent of a Baroque castle. This is where the management, administration and pharmacy are located. Exhibitions of artwork created by patients, hospital staff and professional artists can be seen in the corridors on the first and second floors, and in the entrance hall of the pharmacy.

* St Wenceslas Church is a wonderful example of Art Nouveau. It has a square tower topped with a cupola. During the Second World War, the 55-meter tall tower was to be demolished so that the dome could not be used as a reference point during air raids on Prague. Fortunately, the plans did not realize. From February 1948, a large part of the psychiatric hospital was used as barracks. In 1950, the church was deconsecrated and served as a military warehouse until 1989. Religious activities were discouraged during the communist era because the political elite said that religion was incompatible with the ideals of communism

As the church was no longer used as a church, little of the original interior remains. On the outside walls, there are still original mural pictures of glazed tiles, depicting St. Wenceslas, St. Ludmila, St. Agnes and St. Adalbert. Since 1990, the church has again been used for religious function. The church is open during prayer services and on National Heritage Day in September.

14. Walk to the main exit/entrance on the south side, opposite the main building
15. Go via Hlivicka to Lodzska
16. Turn left to Odra Shopping Centre
17. Retrace your steps to the junction with Hlivicka and continue on Lodzska, until you reach Krakov Shopping Centre. 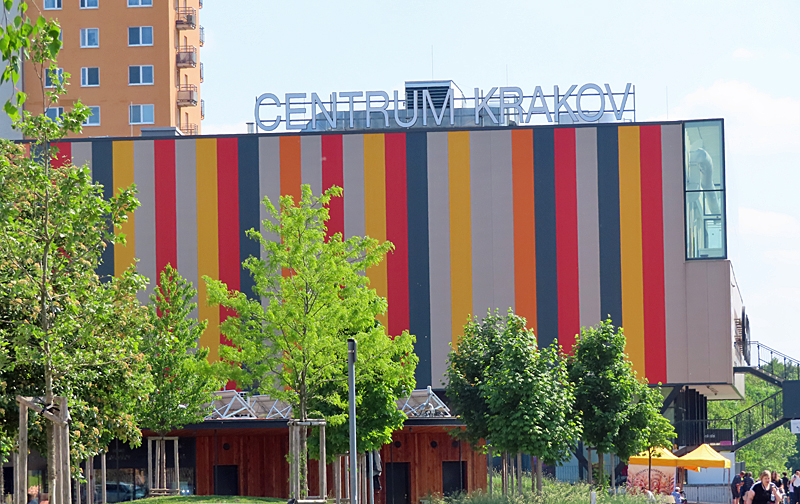 No greater contrast than the old communist-style shopping centre and the modern one. Shopping Mall Odra, Lodzska 26, was built in the 1970s at the same time as sídliště Bohnice whereas Shopping Centre Krakov, Lodzska 6, was in 2014 with forty shops and cafes and restaurants.

There is a bus stop opposite the Krakov Shopping Centre. Take bus 177 direction Chodov. Get off at the Kobylisy stop which is also a metro station.

END OF THE WALK

The Bohnice housing estate was built in the 1970s. There are about 10,000 apartments where 30,000 people live. Together with the Čimice, Kobylisy, Ďáblice and Prosek housing estates, it forms an almost continuous belt on the north side of Prague. Many streets are named after Polish towns, Lodžská, Görlitz, Hnězdenská, showing a relationship with Polish cities. The centre of the sídliště is formed by the streets Lodžská and Těšínská where there is the public library and a concert hall. The Housing Estate has its own schools and Ústavní Gymnazium specialized in teaching Italian. 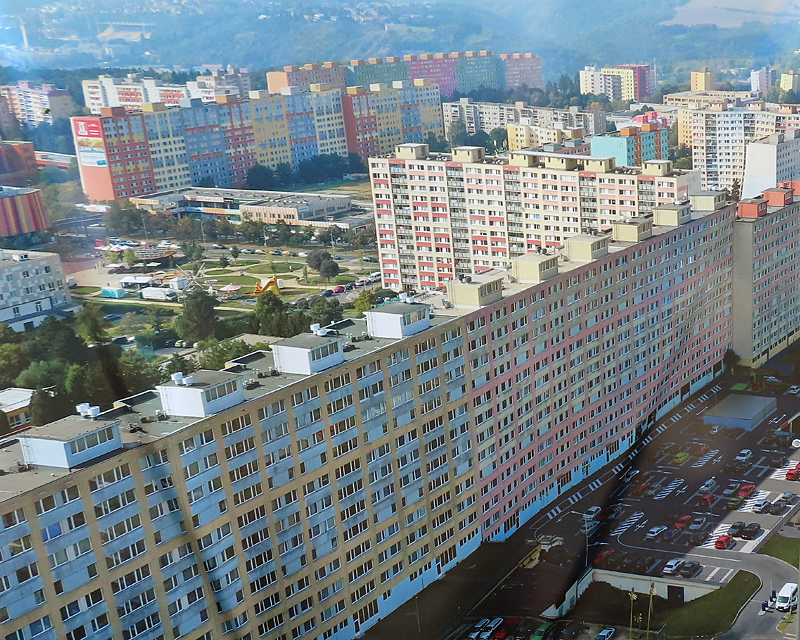