Prague walking tour: you are sure meet a horse-drawn chariot, giant babies and an astronomical clock. The self-guided city walk ‘from the National Theater to Old Town Square’ is an excellent way to see parts of Prague outside the historic centre. You walk across Legion Bridge from where you have one of the best views of Prague Castle. The Prague walking tour leads via Kampa Island to the historic centre. You will walk on Charles Bridge and through Karlova, a busy shopping street with almost exclusively souvenir shops. The Prague walking tour ends in Old Town Square, the heart of Prague. At the end of the tour, you will find plenty of cafes and restaurants with outdoor seating in summer. 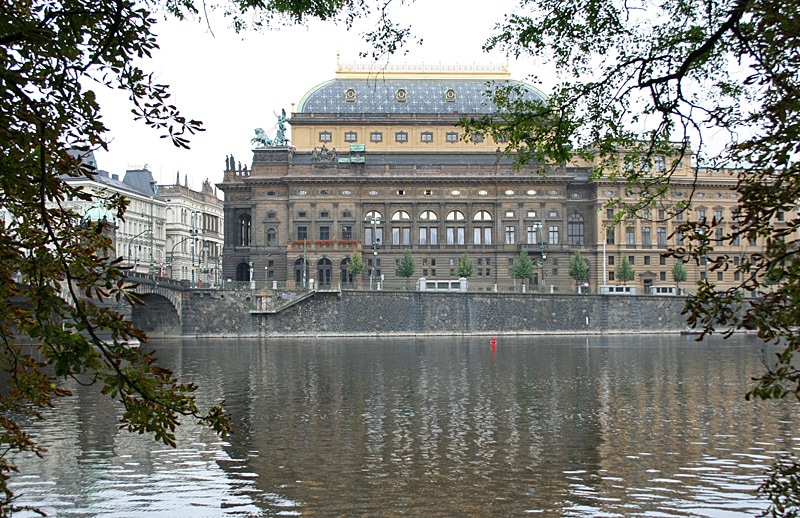 The self-guided city walk starts at the National Theater. The exterior is beautiful and the interior is even more beautiful, but the only way to see the theatre from the inside is to go to an opera or ballet performance. Legion Bridge is one of the eighteen bridges in Prague, halfway there is a staircase and an elevator to Strelecky ostrov, a green island in the Vltava. The island of Kampa on the Mala Strana side is an idyllic part of Prague, far away from the crowds with the atmosphere of a French village. Charles Bridge, Prague’s most beautiful bridge, is always full of tourists and is pedestrians only. Finally, walk down Karlova Street until you get to Old Town Square.

1. National Theater and Nova Scena
A neo-renaissance building next to brutalist architecture. The most striking details of the gold-crested National Theatre are two bronze, three-horse-drawn chariots, transporting the Goddess of Victory. The theatre’s roof is adorned with allegorical figures staring into the distance. The twinkling stars on the sky-blue roof symbolize the summit that all artists should aspire to. The façade of the Nova Scena building consists entirely of opaque glass. It is the home of Laterna Magika performances. Read more about the National Theater.

2. Kavarna Slavia
Cafe Slavia opposite the National Theater at the corner of Narodni Trida and Smetanova embankment was once the place where writers, poets, artists and dissidents met. It is now the meeting point for young professionals and theatergoers. Read more about Kavarna Slavia. 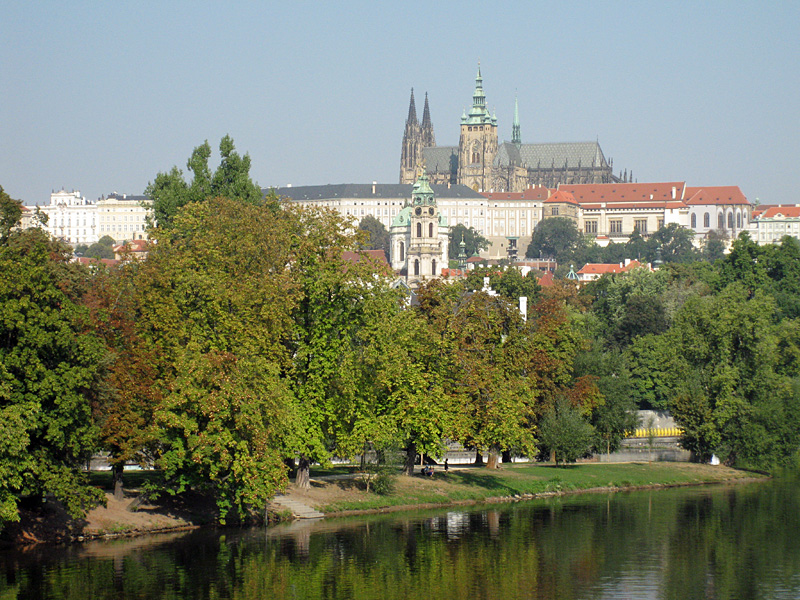 1. Vysehrad
Stop halfway on the bridge. To your left you will see the hill of Vysehrad and to the right Charles Bridge. Legions Bridge is named after the Czechoslovak legions of the First World War. In those days, Prague was part of the Austro-Hungarian Empire. Read more about Vysehrad.

2. Shooters’ Island, Střelecký ostrov, where archers trained in the Middle Ages. The island offers a spectacular view of the National Theatre.

DIRECTIONS 3
Turn to the right at the end of the bridge, Malostranske nabrezi, go down the stairs and you are on Kampa island. Walk straight onto Sovovych mlynu street

1. Kampa Island
The village atmosphere on Kampa Island almost makes you forget that this island is located right in the centre of Prague. Read more about Kampa Island.

2. Kampa Museum
The first building on the right is Kampa Museum, a modern art gallery, housed in an old, riverside watermill. The art collection consists of selections of Cubist works by the early twentieth-century sculptor Otto Gutfreund and the painter Frantisek Kupka whose later works are no longer inspired by cubism but painted scenes from everyday life in which ordinary people stood central, a style that would later be known as Socialist Realism. Read more about Kampa Museum.

3. Go for a walk on Kampa Island. The southern tip is a park and ideal for summer picnics. Sit by the water for sweeping views of Charles Bridge, the Smetana Museum and the Vltava Weir, built in the nineteenth century to make the river navigable. 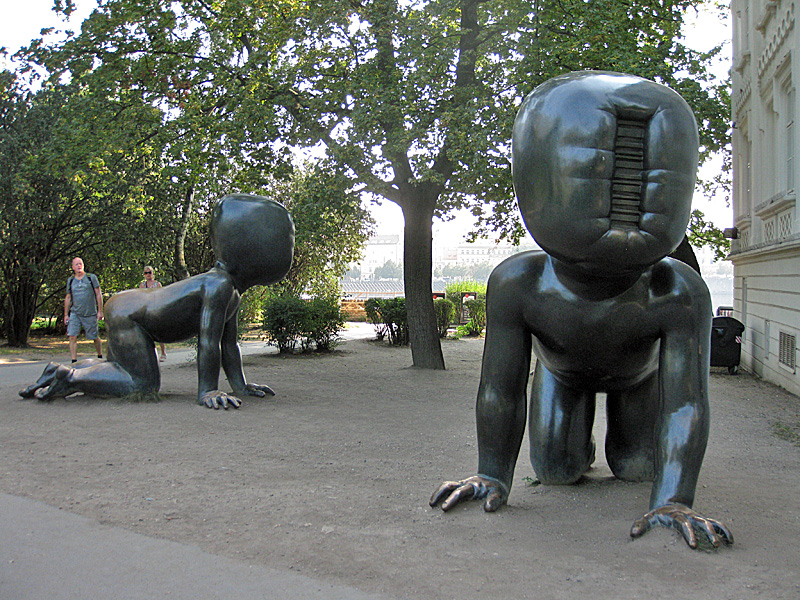 DIRECTIONS 4
Walk straight on, Na Kampe Street
1. Na Kampe has the atmosphere of a French village square with cafes and restaurants. Prague Christmas and Easter markets are held here.

DIRECTIONS 5
Climb the double stairs at the end of Na Kampe and turn right onto Charles Bridge and walk across the bridge
1. The statues on the Charles Bridge are all replicas. The originals are made of sandstone and are not weather-resistant. They are in the Lapidarium Museum in Vystaviste. Read more about the Charles Bridge.

2. Karlova is a narrow pedestrian-only street and always crowded as it is the link between Charles Bridge and Old Town Square, Prague’s two top attractions. There are souvenir shops all over the street.
Look up at the façade of the house at number 22 in Karlova Street. You will see a statue of Libuse. She is the legendary ancestor of the Premysliden dynasty, the first rulers of Bohemia. Libuse predicted that Prague would become an important city. Read about Karlova street here.

1. The fountain on Male namesti is the oldest in Prague and is a memorial to the Black Death. The fountain is difficult to see in summer because of outdoor seating all around it. A striking house is Rott House decorated with murals depicting workers. Until the 1990s it was a hardware store now it is a Hard Rock Cafe

2. Before you get to Old Town Square, you walk past the town hall and the house u Minuty (within a minute). U Minuty is a fine example of Renaissance architecture. This house is covered with ornate sgraffito images of Habsburg rulers, figures from Greek mythology and references to the Bible.

4. Old Town Square is the heart of Prague. The square is dominated by the Baroque Church of St. Nicholas, the Rococo Kinský Palace and the Gothic House of the Bell. The Jan Hus monument is right in the middle of the square. Hus was the founder of the Hussites and criticized the Catholic Church. Twenty-seven crosses in the pavement mark the spot where twenty-seven Czech Protestants were executed in 1621 after the battle of the White Mountain.
Read about St-Nicolas Church on Old Town Square
Read about Tyn Church

END OF PRAGUE WALKING TOUR
Keep St Nicholas Church on your right, continue on to Franz Kafka Square and Kaprova Street. Staromestka Metro Station is at the end of this street. 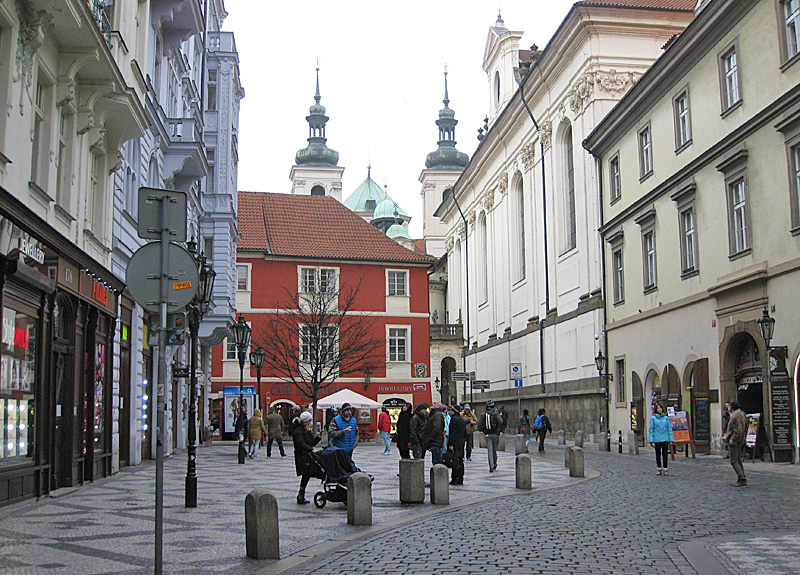