Brno architecture excels in buildings showing art nouveau, functionalist and modernist characteristics. Brno is the second largest city in the Czech Republic and much quieter than Prague. Prague brims with baroque palaces and art nouveau-style buildings, Brno is certainly not inferior to Prague in terms of architecture. Villa Tugendhat designed by Mies van der Rohe is without doubt the most famous functionalist architectural landmark in the city. If you are a fan of modernist architecture, be sure to include a walk through The New House Estate. Hotel International is a prime example of Brussels style, have a beer in the lobby to admire the interior. Art Nouveau enthusiasts will be pleased to visit Jurkovic Villa and Löw-Beer Villa. 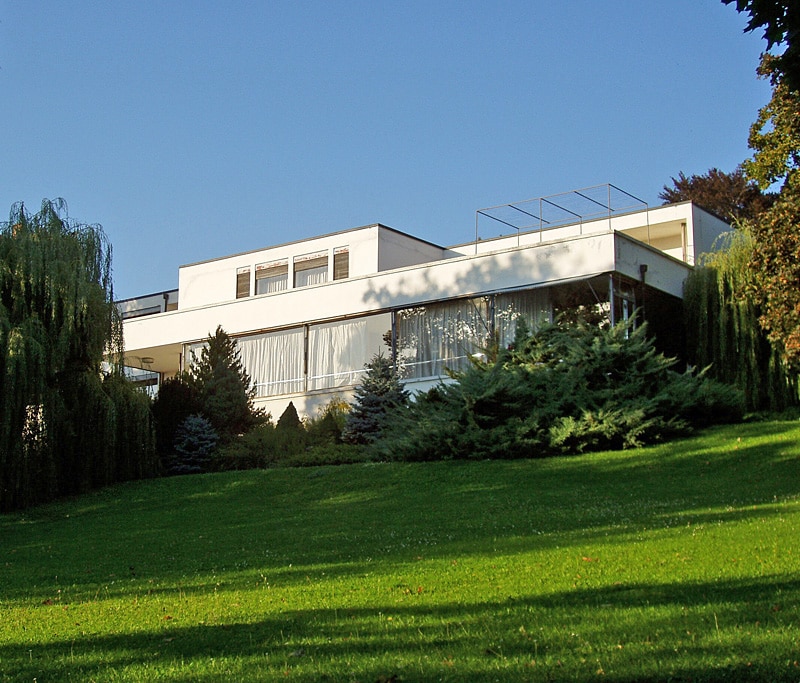 Functionalism in architecture means that the function of the building determines its form. Materials used are glass, steel and reinforced concrete. Buildings are supported by a steel framework and the walls are not load-bearing. Other features are flat roofs and no partitions in the interior but an open space and windows from floor to ceiling.

1. Villa Tugendhat, Cernopolni 45, Brno
Seen from the street, Villa Tugendhat does not look very promising; a rounded wall consisting of frosted-glass windows. It is only from the back that you can see that the villa has three floors. The outside it plain, but the moment you enter, you realize how luxurious and technically advanced the villa is. The onyx wall in the living area changes colour depending on the angle of the sun rays that illuminate it, electrically retractable windows like those in a car and hot air heating are only some of the state-of art gadgets. The villa is furnished with replicas of the originals. Read more about Villa Tugendhat here.

Year of construction: 1929
One-hour guided tours only, not on Mondays.

2. Stiassni Villa, Hroznova 14, Brno
Stiassni Villa is very similar to Villa Tugendhat. It is also built on a slope and the exterior is not very attractive and resembles a shoe box. The ground floor, especially when the large windows are open, forms a unit with the garden. The villa was commissioned by Alfred Stiassni, a Jewish textile manufacturer. The family lived here until 1938, when they fled the Nazi regime. The Gestapo moved in and after the war the villa became state property and celebrated guests stayed here, in 1946 Edvard Beneš, president of Czechoslovakia and in 1964 Nikita Khrushchev, leader of the Soviet Union and many others. The villa has been restored to its original state and can be visited on a guided tour.

Year of construction: 1927-1929.
The guided tour lasts one hour and is every hour on Friday, Saturday, Sunday and Monday. Socialist realism reflects strongly the socialist ideology in which the Socialist Party dictated what a building should look like; own creativity was not appreciated. The Brussels style resembles socialist realism but is freer in style and less rigid in following the Party rules. After Stalin’s death, the Brussels style developed in the Eastern Bloc and also in Czechoslovakia. The Brussels style shows some nationalist features. Characteristics for this style are the employment of glass, ceramics, mosaics, reliefs, neon lighting and austere shapes and angles. 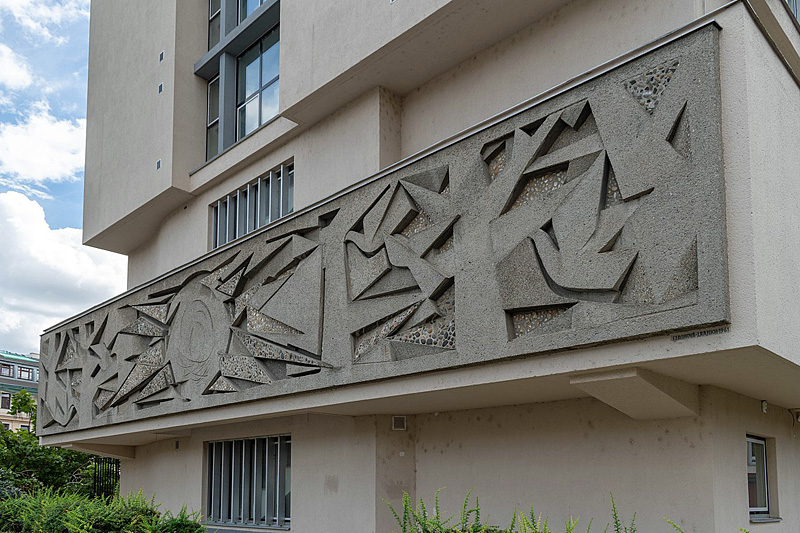 Architects and artists started to use modern techniques and found a new source of inspiration in nature. Characteristic are floral motifs and graceful female figures. Beauty and function were united.

1. Jurkovic Villa, Jana Necasse 2, Brno
The villa is designed by the Slovakian architect Dusan Jurkovic (1868-1947), who lived in the villa. The architectural style is a combination of folk art mixed with Art Nouveau. It is a two-storey house with an irregular shape, a red tiled roof and colourfully decorated exterior walls. The central stairwell is the most striking element in the villa, not very common in houses in central Europe. The rooms are situated around these stairs. The villa is now part of Moravska Galerie and home to the permanent exhibition focusing on Dusan Jurkovic, the architect and his house.

Year of construction: 1906.
Opening hours: Tuesday to Sunday 10am to 12pm and 12.30pm to 6pm, during the winter months only on Saturday and Sunday.

2. Löw-Beer Villa, Drobneho 22, Brno
The villa consists of two floors and four apartments. In total there were fourteen rooms, three kitchens, two bathrooms and six toilets. The façades facing the the street and garden show elegant Art Nouveau details and the interior is also decorated with floral motifs and ceramic floor tiles. The cast iron banister of the stairs in the central hallway shows Art Nouveau details.

In 1913, textile entrepreneur Alfred Löw-Beer bought the villa and in the 1930s he modernized it, in particular the stairwell. In 1929, he gave part of the grounds to his daughter Grete to build a family home; this house would become the Tugendhat Villa. In 1940, the Nazis confiscated Löw-Beer villa and the Gestapo took up residence. In 1954, it became the property of the Czechoslovak state. From 1954-2012 the villa was student accommodation.
The villa is now a museum. The permanent exhibition: The world of the Löw-Beers and Tugendhat families tells the history of architecture and the life of the well-to-do bourgeoisie from the mid-nineteenth to the early twentieth century. 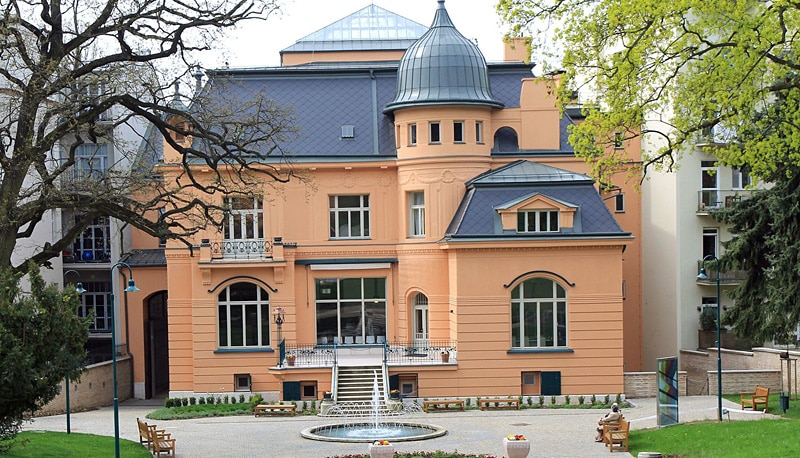 The New House Estate was built in 1928 and consists of single-family homes with the latest gadgets and novelties with regards to architecture, interior design and building materials. The houses do not have cellars but are built on piles. Everything to do with the household, such as washing and cooking, was in the rooms on the ground floor.

The living area is on the top two floors. The roof is flat and has a roof terrace. Wardrobes are built-in. The houses are made of reinforced concrete and are well insulated. The aim was affordable housing for the middle class that could be built fast and speedy.

The sixteen family houses were part of the exhibition commemorating the tenth anniversary of the independence of Czechoslovakia. The theme of the exhibition was ‘contemporary culture’ and it was held at the newly created fairground in Brno. These exhibited homes were used as examples of how to build new neighbourhoods fast and with a minimum of cost. Cities such as Stuttgart, Wroclaw (then called Breslau), Zurich, Vienna and the Baba district of Prague followed the example. The houses took longer than expected to be built and were not finished until the exhibition’s final days. Potential customers could not be made enthusiastic about the new houses because they could not view them. This resulted in a slow sale andr rental, which caused financial problems for the developers. However, for Czechoslovak and European modern architecture, these model homes in Brno were of great significance.

During the communist regime, many villas and single-family homes originally intended for young families were converted into smaller units, so that several families could live in one house. Many subdivided villas are now being restored to their original state, as can be seen in the Strasnice district of Prague, among others.

How to get there
Brno is an easy day trip from Prague It is about 200 km south-east of Prague. There is a direct train connection from Prague Central Station to Brno.

Related articles
Villa Tugendhat and modernist architecture
What to see and do in Brno: free city walk
Brno: Baroque buildings and mummies