Dancing and Cocktails in Prague

Bars in Prague are the best places for dancing and drinking cocktails, wine and beer The Czechs call their beer ‘liquid bread’, tekuty chleb. There is no doubt about it Pilsner Urquell from the city of Plzen is the best beer in the world! But did you know that Czech wine is almost as popular as beer? You go to a wine bar or a vinara when you want to drink wine (they also serve beer). From late September to mid-October bars and pubs serve ‘burcak’, the first wine of the season and comparable to Beaujolais Nouveau.

Dancing and Cocktails and Reserved Tables
When in a pub, a beer hall, a restaurant or bars in Prague you see a sign on the table saying: ‘reserved’, be sure not to sit there. This is where the regulars sit. This practice dates back to communist days when extra business was not desired because the more customers, the more work. Tipping did not exist, and salaries were fixed in socialist days and more work did not mean more money. The serving staff would put signs on several tables so that these need not be served as their pay would remain the same and fewer customers meant less work. 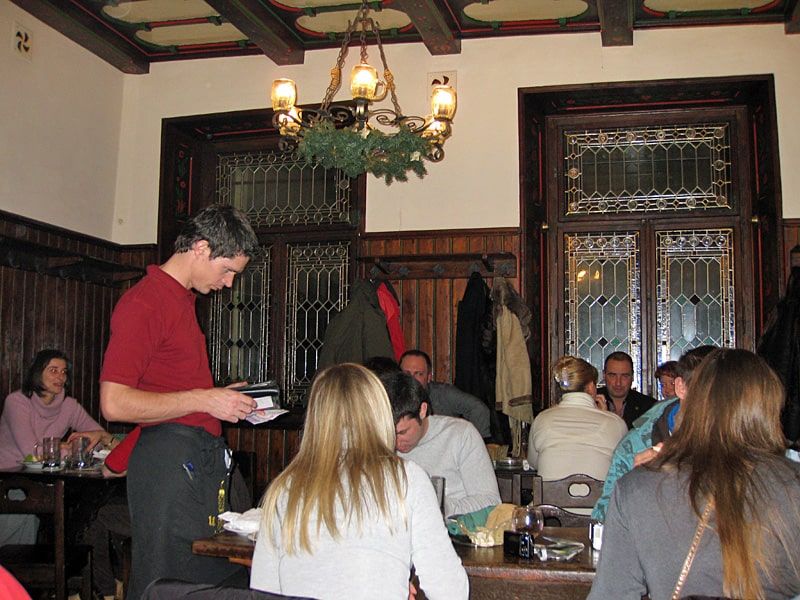 Bars in Prague for Dancing, Cocktails and Wine

1. Monarch Wine Bar
The Monarch Wine Bar in Prague is not only one of the best bars to drink wine, it is also the best place to buy wine. The Gothic vaulted cellar stocks an impressive selection of wines, ranging Moravian, wine producing region in the Czech Republic, to New Zealand wines. Here you drink wine by the glass or the bottle. The tempting appetizer menu offers of tapas, olives, Italian salami, French cheese, Spanish chorizo and Norwegian salmon. Monarch is located close to Wenceslas Square in the centre of Prague.

2. u Fleku
Travel guides agree: u Fleku is the best beer bar in Prague. It is also the oldest, dating back to the fifteenth century. Their brew is called Flek, a dark malty beer, slightly acidic with a warm aftertaste. U Fleku is a gigantic beer pub, with eight beer halls and seat 1200 customers. Another 500 guests can sit in the beer garden. Locals are reluctant to enter because of the many tourists that crowd the place, but the excellent beer is too good not to visit u Fleku. And indeed, this is the only beer hall in Prague where you can taste Flek beer. As soon as you sit at one of the long tables, you get a shot of Becherovka, a herbal bitter. But be warned, it is not complementary! Your bill will be topped by € 4. Despite the busloads of tourists that arrive every day, this ‘tourist trap’ is worth a visit (maybe only once). Enjoy to the live accordion music while drinking Prague’s best beer. 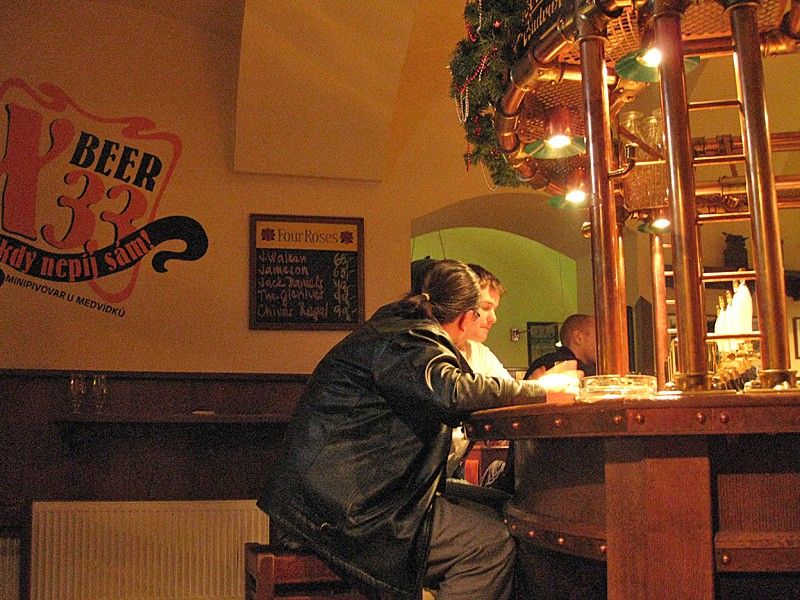 3. U Medviku
U Medviku is a one of the  popular bars in Prague. It is a brew pub, restaurant and hotel, u Medviku (meaning: In the Bear) is centrally located near Wenceslas Square. Downstairs, left of the taps, you will drink draught Budvar. Beer connoisseurs go upstairs to sample X-Beer 33. This dark, bittersweet lager is fermented in the barrel. After adding a special yeast strain, the brew ferments for another fourteen weeks in oak barrels. With an alcohol content of 11.8%, this X beer is as strong as wine. U Medvidku dates back to the fifteenth century. After 500 years of brewing, the brew pub was converted into a microbrewery and a large beer hall. Order Oldgott If you want to taste a strong dark beer with an alcohol content of only 5.2%.

4. Bombay Bar
The Bombay is one of these bars in Bar in Prague that mixes dancing, music and cocktails. Weekends are very popular but there is always a place for another guest. Dancing is until the wee hours. DJs play music fitting seamlessly the wish of the visitors. You dance here in a casual atmosphere until the early hours. DJs play music that fits flawlessly with the wishes of the visitors. Dance wherever you want. In the summer the best place is outside. Cocktail lovers have the time of their lives here. Enjoy many choices from blue passion cocktail, Havana rum, blue Curacao, lime juice and lemonade or rainbow cocktail, melon, banana and strawberry liqueur, grenadine and orange juice. Or do you prefer something without alcohol? Bombay Shake, a mix of strawberries, banana and whipped cream, tastes heavenly. 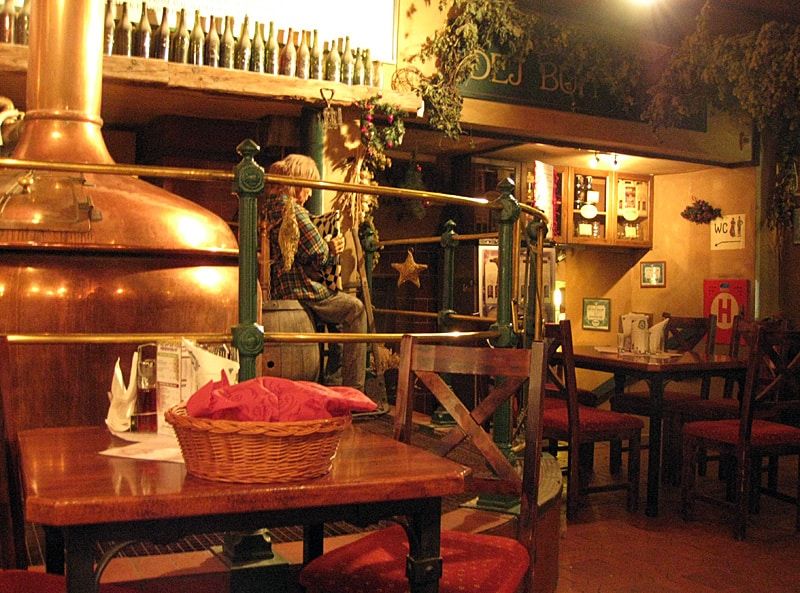 5. Tynska Bar and Books
Bar and Books is a romantic retreat and the ideal place to sit and check messages on your smart phone or, be old-fashioned, read a book. Red walls, vaulted ceilings, leather arm chairs and a library full of books impart a colonial atmosphere. Tuesday is whiskey night: all whiskeys have special prices. The cocktail bartender concocts the most surprising cocktails such as Dark and Stormy, as well as old favorites like gin and tonic. This was the first cigar bar in the Czech Republic. Enjoy cigars from Trinidad, Cuba or the Dominican Republic. Drink Russian vodka with your club sandwich while watching a James Bond movie with your personal soundtrack. Bar and Books is located in the centre of Prague near Old Town Square.

6. Kozicka Bar
Kozicka Bar in Prague is close to the Old Town Square and is a no-frills bar and restaurant popular with tourists and locals alike. Choose your favorite beer from the tap: Staroprames, Gambrinus, Krusovice or Pilsner Urquell, king among beers. There is also a large selection of cocktails and shots. Be sure to taste Becherovka, a herbal bitter from Karlovy Vary, a famous spa in the Czech Republic. And if you do not like Becherovka, try slivovice, a plum brandy or borovicka made from juniper berries. Kozicka, Czech for ‘little goat’, occupies a Gothic basement with brick vaults and sturdy wooden furniture and is decorated with goat sculptures. If you are not a big drinker, ask for a half-litre of beer. If you do not say anything, you will get one litre.

7. Rock Cafe
It is certainly not just rock music on the menu in the Rock Café. This is a huge place with a multimedia room where you can listen to music, a theatre to watch movies, a shop to buy CDs and a bar to drink Czech beer. The main stage is in the basement. Rock Café Club consists of four parts; Rock pub, Gung-Ho shop, bar and concert hall. Have a beer in the Rock Cafe and listen to the thumping music of metal and rock. You pay a small entrance fee for the concerts, but entrance is free on Tuesdays.

8. Hemingway Bar
The Hemingway bar in Prague is a classic bar inspired by the U.S. prohibition an era when alcoholic drinks were banned. But, here in Prague you do not need a password to enter as was necessary in the U.S. at the time. The bar is a tribute to Ernest Hemingway who was not only a famous writer but also a connoisseur of cocktails a few of which have been named after him. At the top of the cocktail menu: Hemingway Daiquiri with rum, maraschino, fresh lime, pink grapefruit juice and a small dash of sugar syrup, exactly the way Hemingway would have liked it. Furthermore, the Hemingway Bar features 200 different types of rum, from everywhere in the Caribbean and beyond. Absinthe and champagne are also on the drinks menu.

9. Burcak, the First Wine of the Season
Drink burcak in the autumn at one of the many burcak stalls or in a cafe or beer hall. Burcak is a semi-fermented wine and still cloudy. The alcohol percentage is not stable but varies from 5 to 8%. Real burcak is white or yellowish (and looks rather unpalatable). When the burcak bought from a street vendor is brownish, you are dealing with counterfeit. The brown color is obtained by adding apple cider. Burcak bought on the street is sometimes diluted with water, which is more difficult to detect. The advantage is that the alcohol percentage is lower. (At least if you consider this an advantage!)