With three opera houses and two concerts halls, Prague is the city for theatre-enthusiast. If you speak Czech you are lucky, because there are about another forty theatres that stage plays. Non-Czech speaking visitors are not disadvantaged, because the repertoire of the opera houses and theatres with English surtitles is varied. Going to a performance is quite an experience also for non-musical visitors because the interior design and architecture of the Prague theatres are unique. An added benefit is the ticket price which is much more affordable than in Vienna, Paris or London. 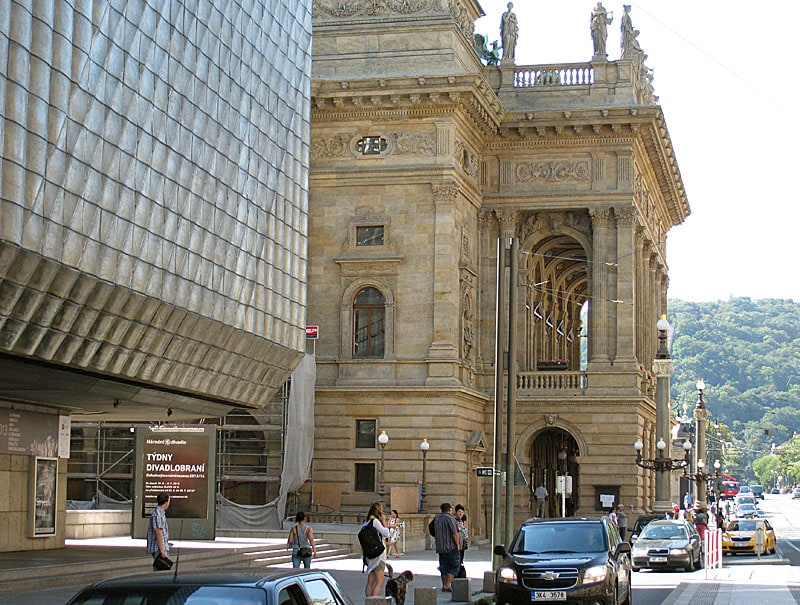 Prague Theatres: What Performances to See

The opera repertoire in the Prague theatres includes all famous composers. Yet, it might be a good idea to see an opera by a Czech composer. Three are recommended for ‘beginners’: Rusalka and Kate and the Devil both composed by Antonin Dvorak. They are sung in Czech with English surtitles. These are usually performed in the National Theatre. Another must-go is Don Giovanni an opera by Mozart which is always on the repertoire in the Estates Theatre.

Popular and quickly sold out are Swan Lake and the Black Light show. Get your tickets here for Swan Lake and here for the Black Light Show. The National Marionette Theatre is not just for children as it stages operas and in particular Mozart’s Don Giovanni. Children might like to see Spejbl and Hurvinek a puppet comedy duo. 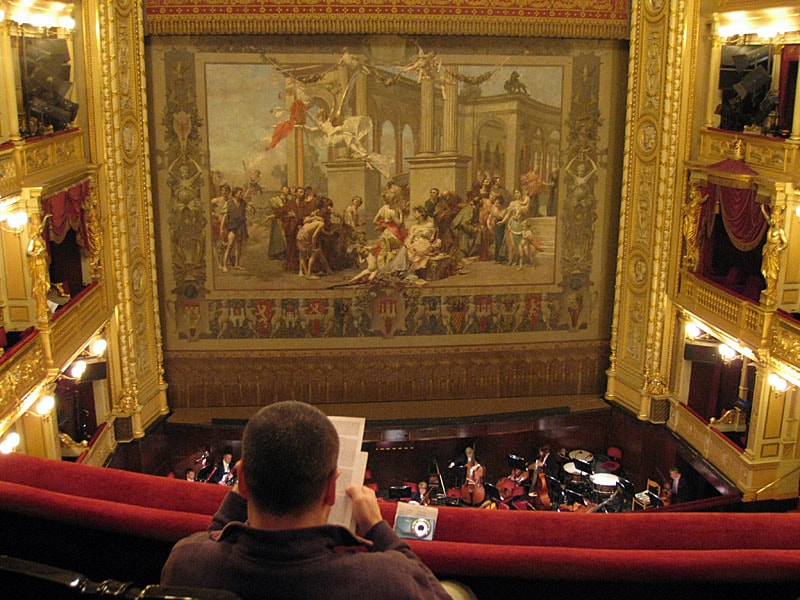 1. The National Theater, Narodni 2, Nove Mesto
The National Theatre (Narodni Divadlo) is mainly for drama, ballet and operas by Czech composers. Surtitles are in English. The National Theater stands on the banks of the Vltava River. Standing on the balcony during the break, the view of the Vltava River and Prague Castle beyond is amazing. Wide staircases lead up to the upper levels. The gold and crimson interior of the theatre is lined with balconies that carry an air of elegance. The main foyer showcases a sophisticated ceiling with paintings of allegorical figures. The stage screen features a painted scene from Czech history. Many Czech theatre goers still dress up for the occasion, but you will also see casual clothing.

2. Estates Theater, Zelezna, Stare Mesto
Estates Theater (Stavovske Divadlo) mainly for drama, ballet and opera (and in particular Mozart’s Don Giovanni). Surtitles are in English. This theatre is much smaller than the National Theatre and if you buy seat, be sure that the stage is right in front of you. The opera boxes on the sides have two rows of chairs. If you sit in the second row, your view is restricted. The exterior is in Empire style with pilasters and Corinthian columns, the colour scheme is light green and crème. The interior is dark red velvet and the gilded décor and chandeliers make it one of the most beautiful theaters in Prague. The ghost statue outside represents Il Commendatore a character in the opera Don Giovanni.

3. State Opera, Wilsenova 4, Vinohrady
State Opera (Statni Opera) is mainly for operas of non-Czech composers. This is where you will go for Bizet’s Carmen or Verdi’s La Traviata. The theatre opened in 1888 as a German stage with a performance of Wagner’s opera The Mastersingers of Nuremburg. After a four year closure for restoration, the theatre reopened in January 2020. The neo-Rococo interior with frescoes and painted ceilings underwent major renovations. The eighteenth-century theatre is now equipped with twenty-first-century technology. A central computer operates the stage elements and each seat features a touchscreen offering surtitles in several languages. The stage curtain is new and a replica of the original which mysteriously disappeared in 1945. It depicts a poet, who travels around the world to find inspiration in people’s vices and virtues. He then writes a story to be performed on the opera’s stage. 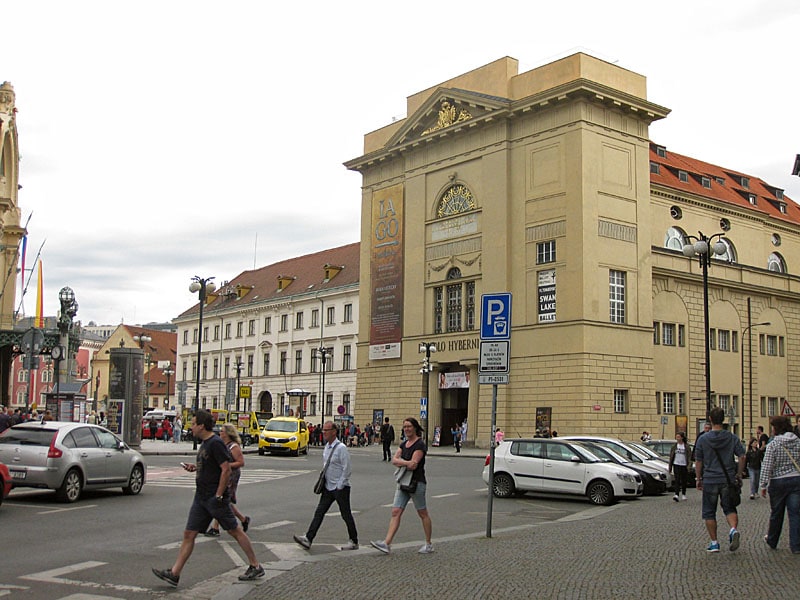 Hybernia and Broadway are popular with foreign tourists in Prague. That’s why booking beforehand and online is highly recommended. Nova Scena (New Stage) is the modern building next to the National Theater. Its façade consists of more than four thousand blown glass blocks and was a showpiece of the Communist era. Puppet makers and puppeteers belong to Czech national heritage, a good reason to see a puppet show in a charming, old-fashioned National Marionette Theatre.

1. Hybernia Theatre, namesty Republiky 4, Nove Mesto
Hybernia Theater (Divadlo Hybernia) aims mainly at tourists and specializes in ballet productions. Swan Lake, Romeo and Juliette and during Christmas time The Nutcracker are always on the repertoire. The performances in Hybernia are shortened version. There is no orchestra and the music is pre-recorded. If you want to be sure of a seat, it is best to book online.

2. Theatre Broadway, na Prikope 4, Nove Mesto
Theatre Broadway, also known as Glow, is famous for Black Light Theatre, a combination of pantomime and dance at a darkened stage illuminated by UV light. The artists are dressed in fluorescent costumes which together with the lights create three-dimensional effects. The result is that the mime artists and dancers appear to float. Black Light Theatre is an optical illusion. The performances are very popular with tourists. It is best to book online.

3. Nova Scena, Narodni 4, Nove Mesto
Laterna Magika (Magic Lantern) performances take place almost daily in Nova Scena. Laterna magika is a special theater form that originated in former Czechoslovakia. The performance is a spectacle of film and computer generated visual effects and incorporates live pantomime and dramatic action. Everyone can understand the story because there is no spoken word. This art form was first shown to the public in 1958 during the World Exhibition in Brussels.

4. National Marionette Theatre, Zatecka 1, Stare Mesto
Puppet theatres have a long tradition in Czechia. The National Marionette Theatre is famous for its performances in which puppets and costumed puppeteers play a part. On the repertoire are classical operas like Don Giovanni and the Magic Flute. If you are not a lover of operas, it is good to know that you will see only highlights not the full opera. 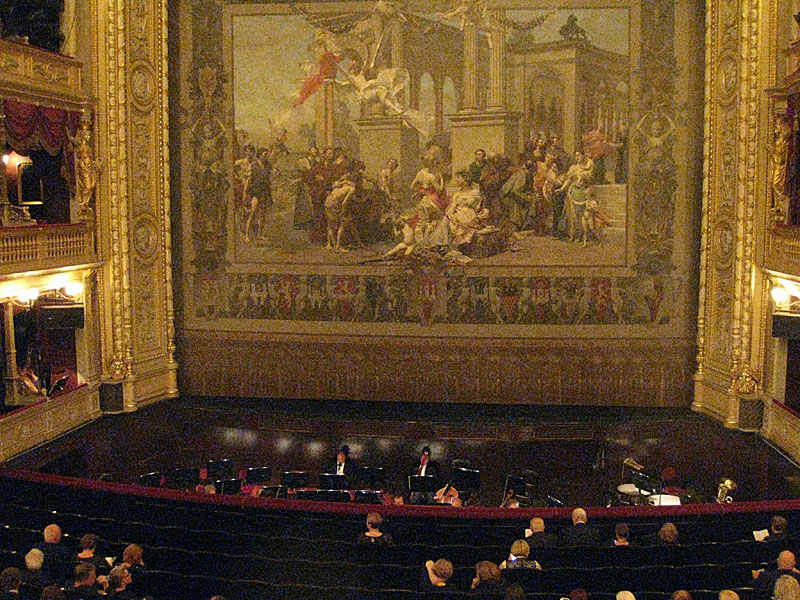 Theatres Away from the Centre

As public transport is fast and frequent, going to a theatre performance away from the city centre is not a drawback. Metro Line A takes you to Dejvicka. Metro line B and C take you to Florenc for the Karlin Theatre.

1. Divadlo Spejbla a Hurvinka, Dejvicka 38, Bubenec
Puppet Theatre Spejbla and Hurvinka is named after a puppet comedy duo: simple-minded father Josef Spejbla, and his son Hurvinek, who live together with another family in the same apartment. Their dog barks human language. They are the brainchild of Josef Skupa (1892-1957). These performances are aimed at children but adults will like them as well. The performances are in Czech, no translations, yet the storyline is easy to follow.

2. Karlin Musical Theatre, Krizikova 10, Karlin
Karlin Musical Theatre (Hudebni divadlo Karlin) stages opera, operette, ballet and musicals. It opened its doors in 1881, had benches inside and was used as a circus. In the 1920s it was refurbished and staged variety shows. After World War II, the theatre became home to more musical genres.

How to Buy Tickets

Box offices are generally open from Monday to Friday from 09.00 / 10.00 – 18.00 or until the beginning of the performance. There are a number of ticket agencies in central Prague where you can buy theatre tickets. Bear in mind, these ticket are always more expensive because of the commission. A few days and often on the day of the performance itself there are usually seats left. If you want to go to a ballet performance in the Hybernia Theatre of the Black Light Show in Theatre Broadway it is mandatory to book online because these shows are very popular and sell out quickly. 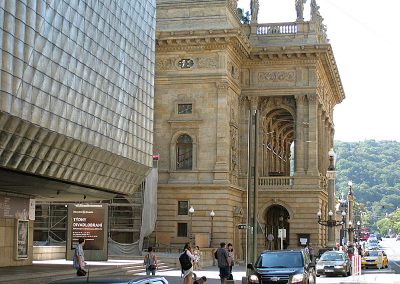 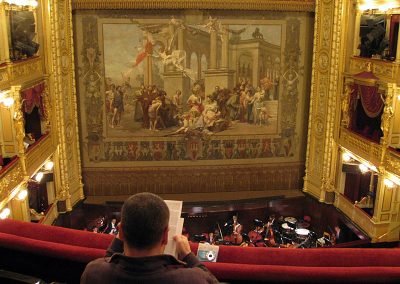 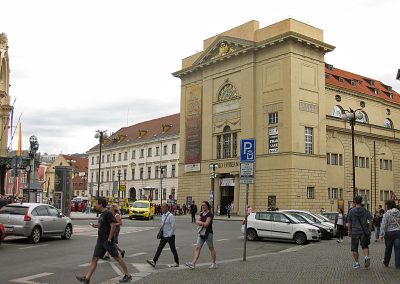 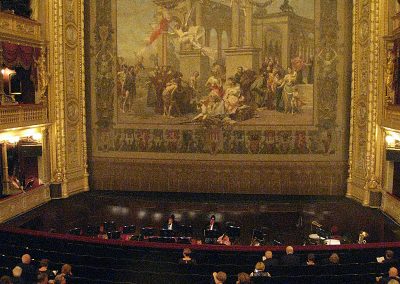 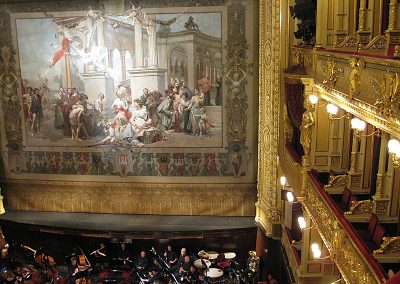 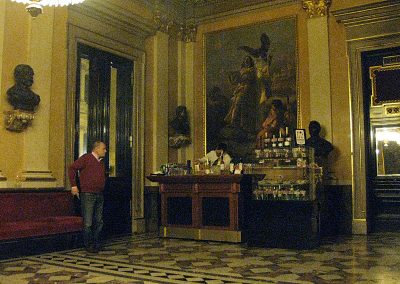 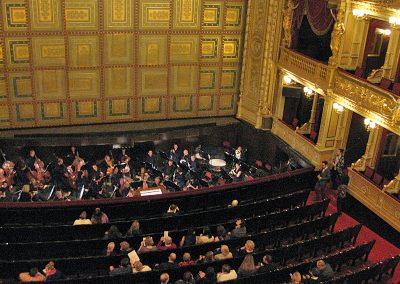 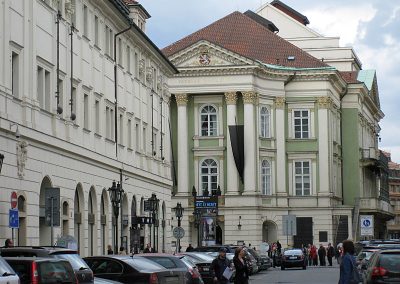 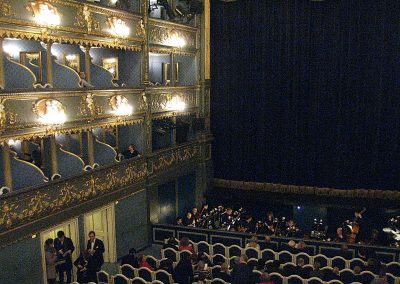 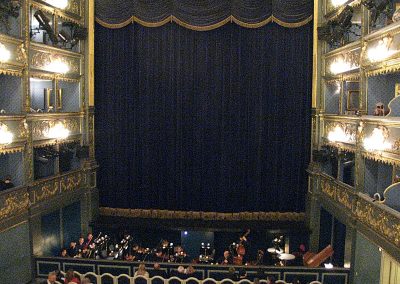 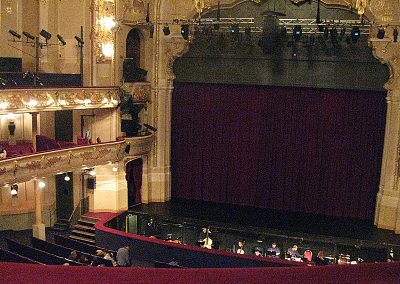 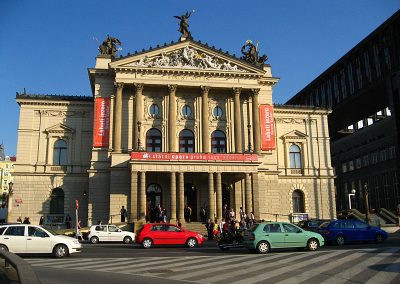 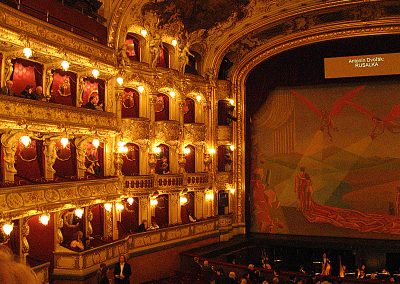 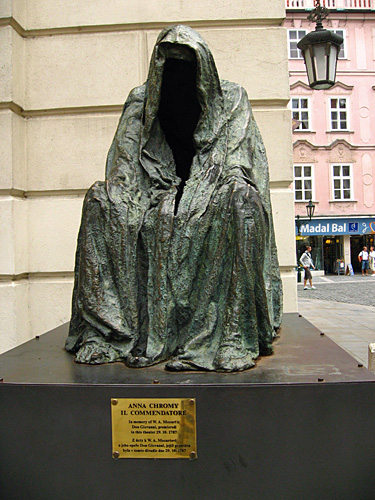