Winter River Cruise in Prague Tip for the Christmas Holidays

A winter river cruise on the Vltava River is a true experience! Especially during the dark days before Christmas, a stylish boat trip is the perfect way to spend a few hours during your Christmas holiday in Prague. The city is in a festive mood: twinkling lights, mistletoe and holly. This time of year the big attractions is the Christmas Market. Winter is not the only time of the year to go on this river cruise, it is fun any time of the year. This three-hour dinner cruise is the perfect way to sample fine dining while you see the sights of Prague from the river. 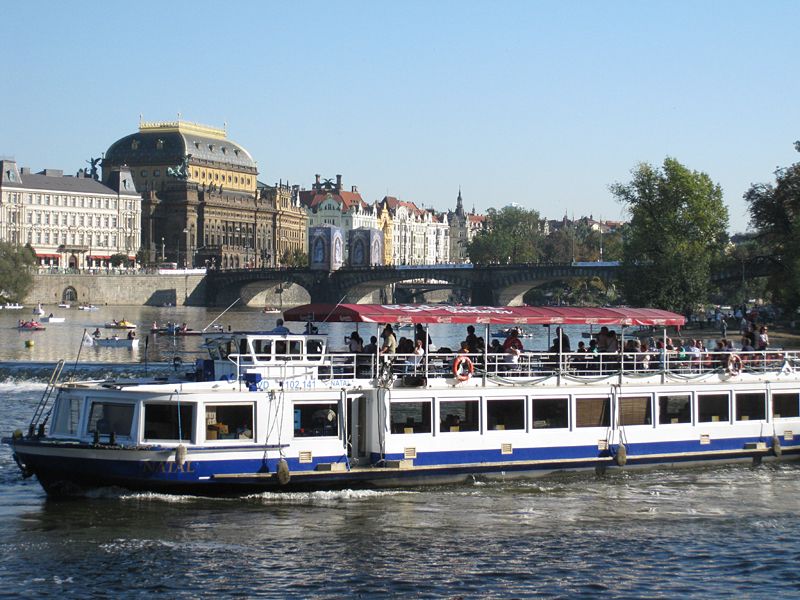 What is more romantic than to go on a boat trip in the dark days before Christmas? While listening to live music, you enjoy a buffet dinner of cold and hot dishes and delicious desserts. A typical Czech welcome drink is served as soon as you get on board. The boat is heated in winter and air-conditioned in summer. As much of the vessel is made of glass, you have a panoramic view of the iconic buildings that border the Vltava River. This cruise is also recommended in the other months of the year!

TIP: book this dinner cruise online, then you are assured of a place as boot trips in Prague are very popular.

Highlights of the Winter or Summer Cruise

The cruise depart from pier 5, Dvorakovo Nabrezi, which is the Vltava quay just below Cechuv Bridge and can be reached by tram 14 and 17, Cechuv most (bridge) stop.
You pass through the oldest lock in the Vltava River and then you sail under the Charles Bridge: the oldest, most beautiful and busiest bridge in Prague, pedestrian only. Thirty statues and a crucifix adorn the railings of the bridge. The view of Prague Castle, perched high on one of the hills on which Prague is built is impressive.

Prague Castle is much more than just a castle. It is a collection of buildings, churches and museums. The castle complex and St Vitus Cathedral determine the skyline of Prague. You pass the Rudolfinum concert hall, the National Theater, Kampa Island, the dancing house and Vysehrad, Prague’s second castle, high on a rock. The illuminated buildings are magical when viewed from the river.