Alchemists were welcome in 16th century Prague because alchemy was a respected science. Rudolf II (1552-1612) was obsessed with alchemy and the search for the Philosopher’s Stone. This mysterious substance would not only turn base metals into gold, it would also be an elixir of life, which would bestow immortality, eternal youth and cure all diseases. Emperor Rudolf had large laboratories built in Prague Castle where alchemists such as John Dee and Edward Kelly could work for him. Rudolf also experimented with alchemy. 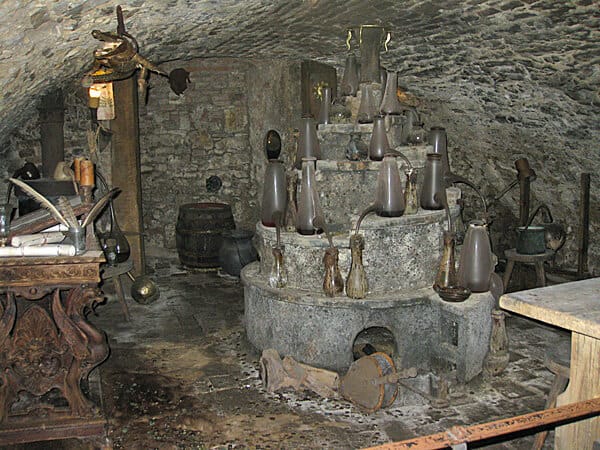 Today, Prague is still under the spell of alchemy as these two museums show.

1. Museum of Alchemists and Magicians of Old Prague (Jansky vrsek 8) in the house where Edward Kelly lived. The interactive laboratory shows how alchemists worked.

Prague is full of references to the alchemists. Many house signs are associated with alchemy. In order to be able to interpret them properly, it is useful to know the four stages of alchemy.

1. Nigredo stands for blackness, the unknown and impure
2. Albedo stands for whiteness, the washing away impurities
3. Citrinitas stands for yellowness, the transmutation of silver into gold.
4. Rubedo stands for redness, the end product of the alchemy process. Both the philosopher’s stone and gold were associated with the colour red. 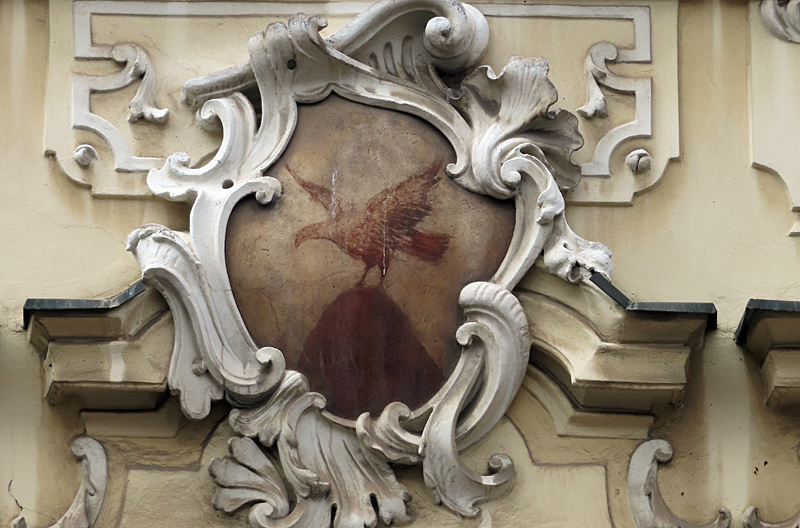 House symbols in Celetna Street, in the Nove Mesto district

Celetna 8, In the Black Sun (nigredo)
The black sun is associated with raw base metal, the earliest stage of creating the philosopher’s stone. The elements decomposed and had to be cooked into a black mass.

Celetna 10, in the White Peacock (albedo)
The peacock’s tail is multicoloured. It is a scientific fact that combining the colours of the rainbow creates white light.

Nerudova 6, In the Red Eagle (rubedo)
The red eagle signifies the final stage in alchemy, base metal being turned into gold.

Nerudova 27, In the Golden Key (rubedo)
This sign refers to the philosopher’s stone, the legendary alchemical substance that turned ordinary metals into gold.

Nerudova 51, In the Little Green Deer (rubedo)
This house symbol refers to the final stage in the process of turning base metals into gold and was symbolized by a deer. Deer represent masculinity and unicorns represent femininity. When they meet, they create the philosopher’s stone.
More about house signs in Nerudova Street 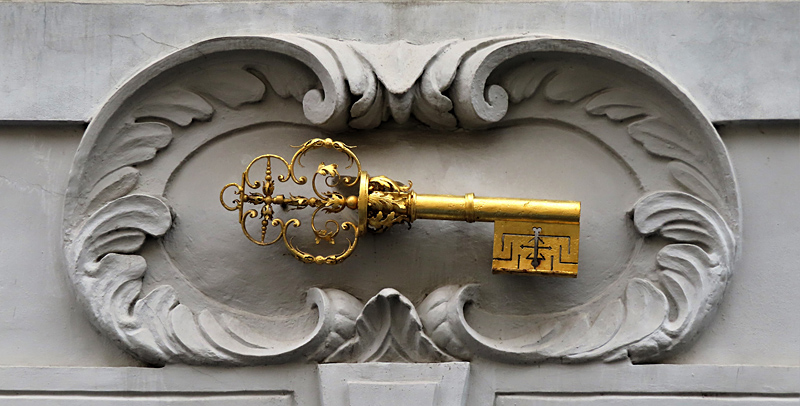 Rudolf and the Alchemists

In the 15th and 16th centuries, alchemists were not welcome in Europe, but they were in Prague. Rudolf II, Emperor of the Holy Roman Empire, was extremely interested in the occult. He regarded finding the philosopher’s stone as his life’s mission and filled his court with alchemists including John Dee and Edward Kelly.

Alchemy is the application of scientific principles, as they were understood in the sixteenth century, to magic. Its main goal was to find the philosopher’s stone and to transform base metals into gold. All experiments were shrouded in mystery. Instructions were written in secret code some of which have never been deciphered.

Many alchemists were quacks, yet their science was taken seriously and in the seventeenth-century mathematician, Sir Isaac Newton, conducted alchemist investigations and became the forerunner of modern chemistry. 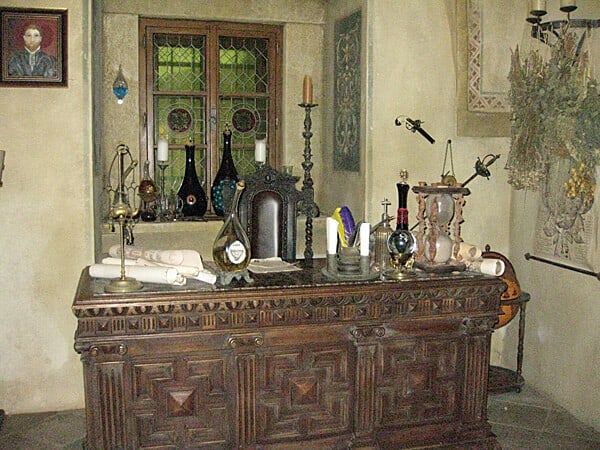 The British Edward Kelly (1555-1597) was a convicted criminal who claimed to be able to convert base metals into gold. He also claimed that he could talk to angels.

Emperor Rudolf, obsessed with art, philosophy and magic, was convinced that Kelly possessed the secret of alchemy. Naturally, Kelly failed to convert ordinary metals into gold. So Rudolf had him arrested for illegal dueling, but the real reason was that he wanted to force Kelly to produce gold as Rudolf was convinced that Kelly was capable of this.

While Kelly was in prison, the emperor had him interrogated to learn the secret formula for the elixir of life. Kelly tried to escape by jumping out the window and broke his leg that had to be amputated. A second escape attempt also failed. Finally, he took poison that ended his life.

John Dee was one of the foremost alchemists of the 16th century and was the confidant of Elizabeth I. He was well versed in sciences such as mathematics, astronomy and geography. After he met John Kelly, the two held spiritual meetings and traveled around Europe. Dee spent some time as an alchemist in the court of Emperor Rudolph II, but left after an argument with Kelly. Kelly claimed that he could communicate with angels and that the angels said they were to share their wives. Dee left Prague and returned to England. It is very likely that Kelly started the fight because he saw Dee as a rival.

Elizabeth I required information about the strategies and plans of her enemies. She appointed John Dee, philosopher, alchemist and mathematician, as her confidant and advisor to spy for her. Dee signed his letters containing information as 007. The two circles symbolized John Dee’s eyes as the eyes of Queen Elizabeth. Seven is the lucky number in alchemy. When Ian Fleming, author of the Bond novels, read Dee’s biography, he realized that 007 was the perfect fit for his Bond character.