Charles Bridge: built with a curve and with egg

Charles Bridge is to Prague what a trademark is to a company, a permanent hallmark used to promote the city. Travel websites, travel guides and tour guides all promote and sell the ‘Charles Bridge’ product. Proof that this symbol works well is that the bridge is always full of people, mainly tourists. Until 1841, Charles Bridge was the only connection between the Staré Město and Malá Straná districts. Mysteries surrounding historical monument also make them famous: two secrets shroud Charles Bridge. Why is there a curve in the bridge and were eggs used when building the bridge? 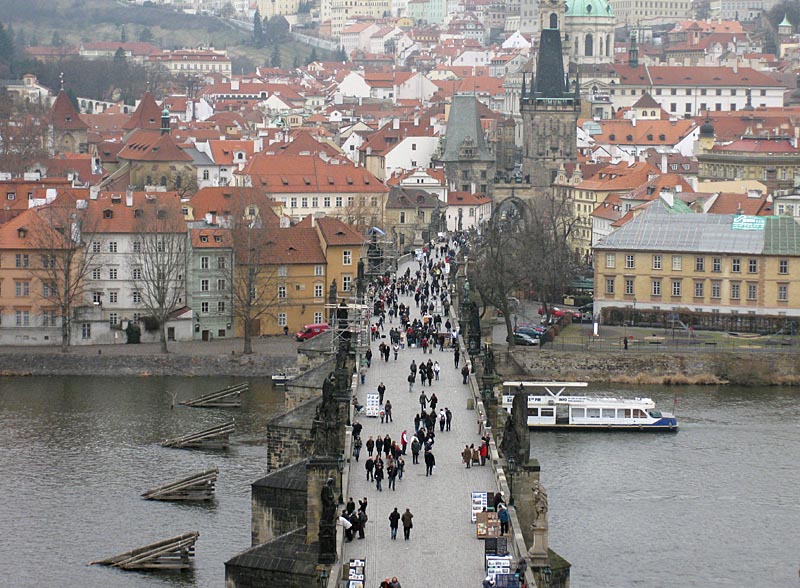 The first bridge across the Vltava River was of wood and built in 1160 and soon afterwards destroyed by flooding. Its successor was the stone Judith Bridge. The bridge over the Danube in Regensburg served as an example, the oldest stone bridge in Germany and in Europe. Judith Bridge ran parallel to the current Charles Bridge and was washed away in the 1342 floods. 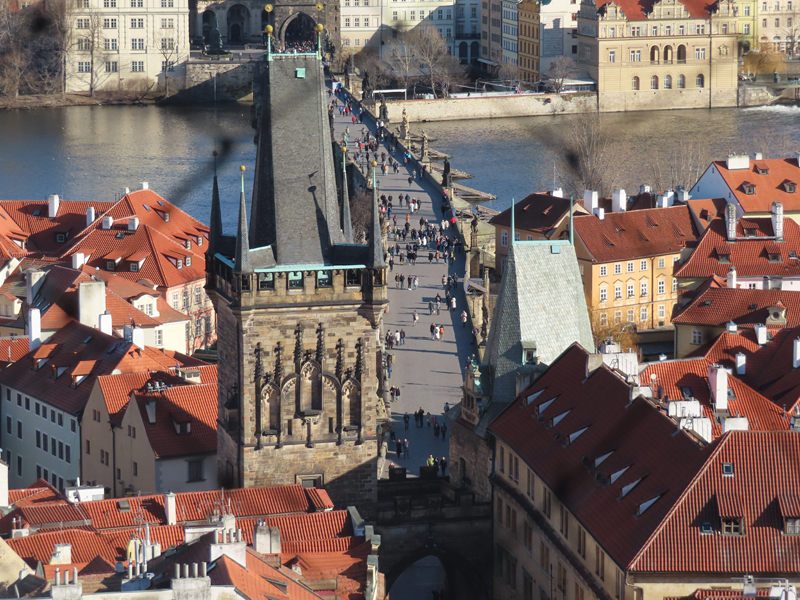 The curve in Charles Bridge

Today, when standing in the bridge head tower, you can clearly see the curve. The bridge runs straight from the Staré Město side to approximately Kampa Island, and there the bridge bends to the right. Why?

It is known fact that Charles IV consulted astrologers for favourable signs and positions of buildings. He was a firm believer in the astrological line. When standing on the bridge, the sun sets directly over St. Vitus Cathedral during the summer solstice. This is done on purpose and the reason why Peter Parler, the German-Bohemian architect of the bridge and the cathedral, placed the bridge curves to right.

2. Another explanation for the curve is that the original Judith Bridge was not completely straight either. There are still remnants of this bridge in the Vltava River which suggest this. The new bridge was built behind the collapsed bridge and is therefore also slightly convex. Peter Parler made the arches of the bridge higher than the ones of the old Judith Bridge so that, when there was much water in the river, the Vltava would not splash against the bridge piers and across the deck.

3. Karel IV commissioned Peter Parler to design and build Charles Bridge. The king wanted the bridge to serve as a form of defense and at the same time it had to be the most beautiful bridge in Europe. The bridge tower at the Old Town side was designed as if it were the actual entrance, a magnificient drawbridge, to Prague Castle, and at the same time a bastion. The bridge has two curves so that it is impossible to shoot down its length moreover the towers and gates could be closed at will. This is the most likely explanation for the curves in the bridge.

Is Charles Bridge built with eggs?

It is said that Charles IV ordered to add eggs to the mortar to increase its strength of the bridge. This reinforced mortar which would stick better to the building stones. (Just like raw egg is added to meatballs to make them firmer).

In 2008, the mystery was unraveled, and the egg story did indeed make sense. During renovation work, scientists from VSCHT, the Prague Institute of Chemical Technology, took samples of the original mortar. They were delighted to find that their analysis showed that the fourteenth-century mortar contained egg proteins.

The euphoria did not last long. Questioning the outcome, scientists from the Faculty of Science at Charles University, re-examined the mortar again in 2010 and found that it showed no traces of organic additives. They believed that hydraulically binding lime similar to modern Portland cement had been used in the construction of the Charles Bridge. The research team concluded that the original inner structure was in very good condition, despite the bridge being 650 years old. 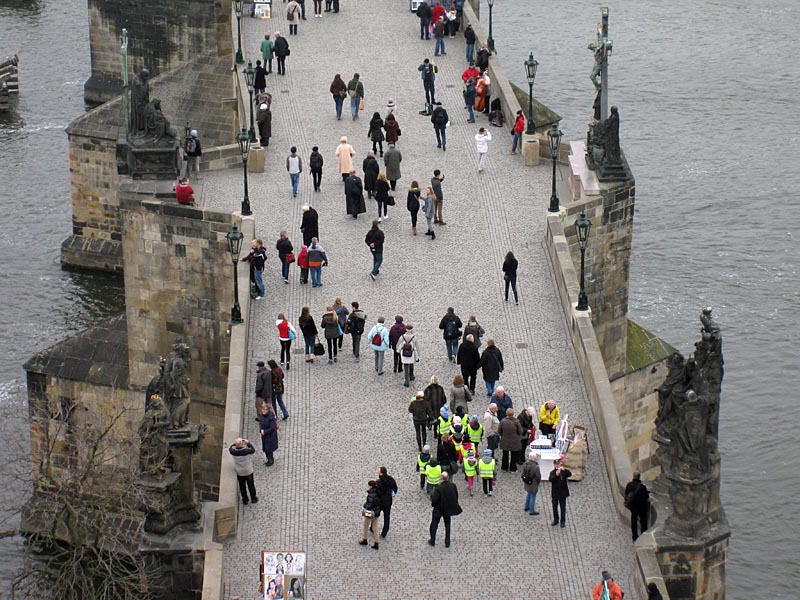 According to tradition, honey liqueur and eggs were added to the mortar to make it stronger. Since there were not enough eggs in Prague, all towns in Bohemia and Moravia had to contribute. Apparently, the instructions gave rise to misunderstandings: some cities sent cheese and cottage cheese. The city of Velvary was so wise as to boil the eggs first so they wouldn’t break in transit.

When viewing Charles Bridge on Google Earth, it is clear to see that the bridge is built slightly convex against the current and that the bridge on the Malá Straná side, near Kampa Island, curves to the right. The bridge piers on the south side are pointed and in front of them are wooden icebreakers to weaken the often strong current. It could well be that this is the original design by Peter Parler and that all the stories and details about the curve in the bridge are mere assumptions. 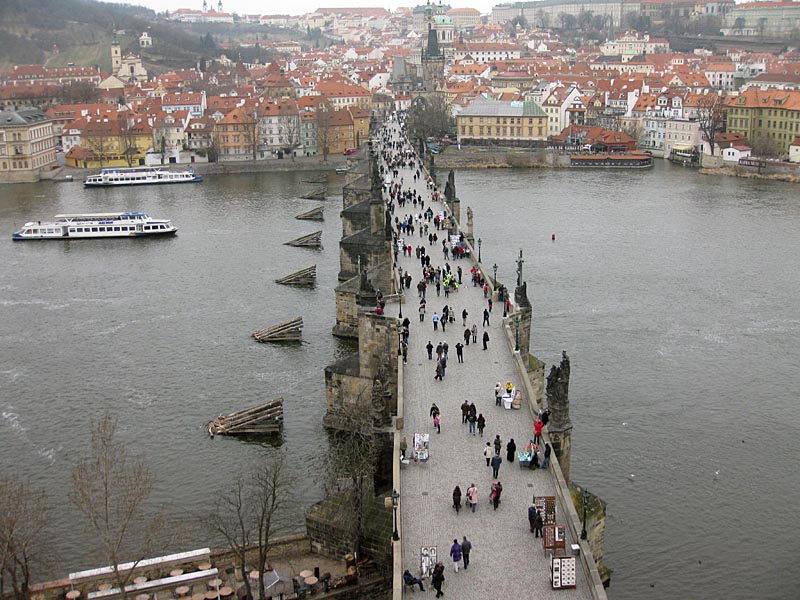 Charles Bridge the hallmark of Prague

It is a fact that the bridge is the lifeline of Prague, and for a long time, it was the only way to cross the Vltava River. Merchants met on the bridge and did business there. Court hearings and tournaments were also held. The bridge was part of the Royal Route, the road used by kings on their way to be crowned in St Vitus Cathedral. Frederick II, King of Bohemia, fled across the bridge in 1620 after the defeat on the White Mountain, and in 1648 the Swedes waged their attack on Prague here. Today, the bridge is mainly a place where tourists gather and stroll about. The stories about the curve and the eggs, give the bridge an extra dimension.