The Cubist Kiosk in a public park near Prague’s Main Train Station is a Bureau de Change. It used to be a Trafika Kiosk: a place that sells newspapers, magazines, soft drinks, snacks and, very importantly, tram and metro tickets. This is appropriate because it was next to a tram stop. When you change money here, you do so in an architectural landmark! The kiosk is a typical example of Rondo-Cubism and dates from the 1920s.

At the beginning of the 1920s, a special cubist spin-off arose in the Czech Republic, and in particular in Prague: Rondo-Cubism. Crescents, circles and round forms characteristic for traditional Slavonic art replaced the austere geometric and zigzag patterns of cubism. Straight lines merged into playful, round shapes. 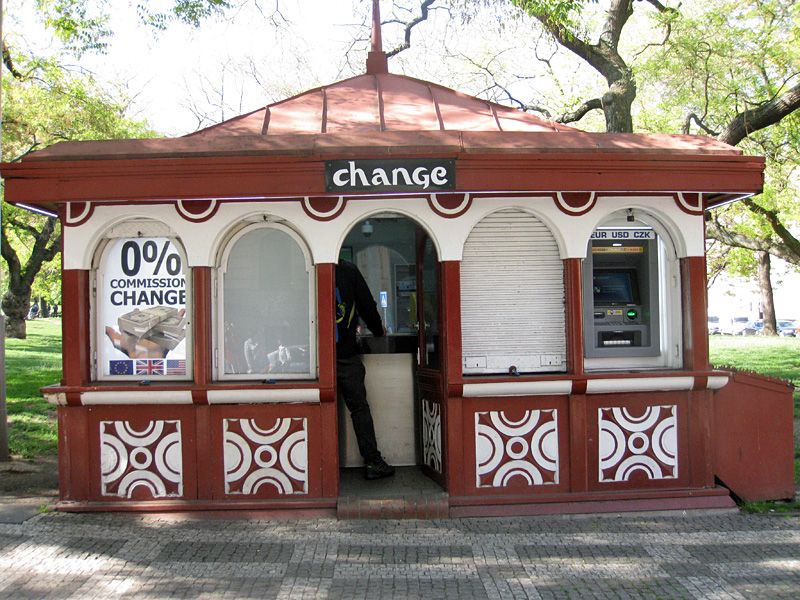 Cubist Kiosk: a fake or an architectural gem? Today the kiosk is well maintained but this was not always so. In 1981, the building has become so dilapidated that the city council wanted to demolish it. Architectural experts wanted it to be a listed building. They were convinced that it was the work of either Josef Gocar, the architect of the Cubist House ‘The Black Madonna’, or Jan Pavel, the designer of Palac Adria on Narodni street. Both were prominent Czech Cubist architects.

Listing this was a smart move and the kiosk was refurbished. However, today’s experts doubt whether this small building has been designed by one of the two architects. They believe that the names Gocar and Pavel were merely used to preserve the kiosk. Genuine or fake, the kiosk is a wonderful example of rondo-cubism style and the name of the architect is unimportant. It is a charming structure with graceful arches and pillars. The rust-brown panels decorated with a typical round pattern: a delightful ‘Hansel and Gretel House.’ By now, everyone has long forgotten that the renovation cost CKZ 165,000 (€ 7,000).

The Cubist Kiosk is located on the northern side of Vrchlickeho Sady, the park in front of the main entrance of Hlavni Nadrazi (main railway station), at the corner of Opletalova and Bolzanova streets.
Tram 2, 5, 9, and 15, Hlavni Nadrazi stop.