The equestrian statue of Jan Zizka in Prague rises into the air. Situated atop Vitkov Hill, it looms over the districts of Karlin and Zizkov which was named after this famous Hussite military leader. Unveiled in 1950, this enormeous bronze statue stands in front of a colossal building: the National Monument. With a weight of 16.5 tons and a height of 9 meters, this statue is the second largest equestrian statue in the world. Only that of Genghis Khan in Mongolia is bigger. The National Monument was built between 1928 and 1938 to honour the Czech legionary and the foundation of Czechoslovakia. During communist days, it was used as a mausoleum. Today it is a museum. 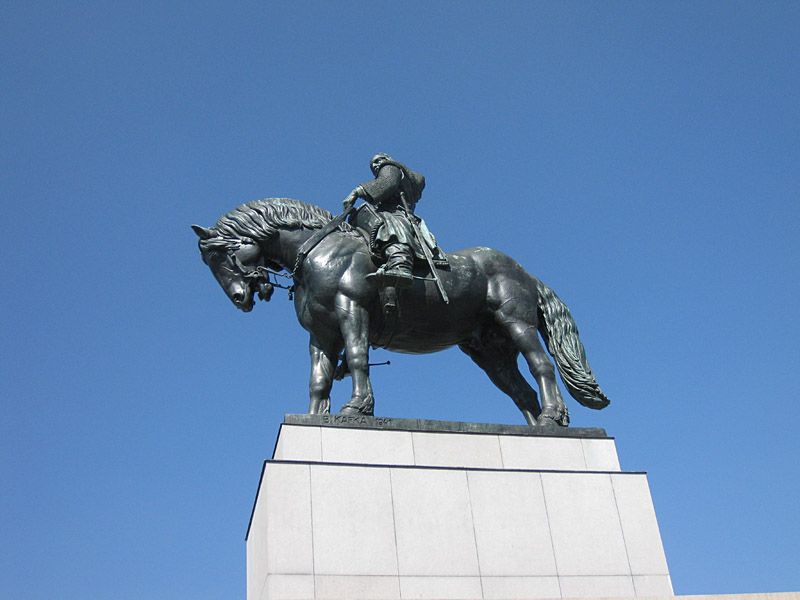 The equestrian statue of Zizka stands on Vitkov Hill which offers sweeping views of Prague. Jan Zizka won victory at the battle of Vitkov Hill in 1420. He defeated the crusaders who were sent to destroy the Hussites’ movements. The Hussites were the followers of Jan Hus, a theologian and church reformer. The Czech sculptor, Bohumil Kafka, started work on the Zizka statue in 1930. He made a plaster model of the statue in 1941 and died shortly after. They plaster molds were in a secret place during World War II so that the Nazis would not be destroyed them. The Zizkov equestrian statue was cast at the end of the war and unveiled in 1950. The equestrian statue of Jan Zizka is a landmark seen from many parts of Prague. 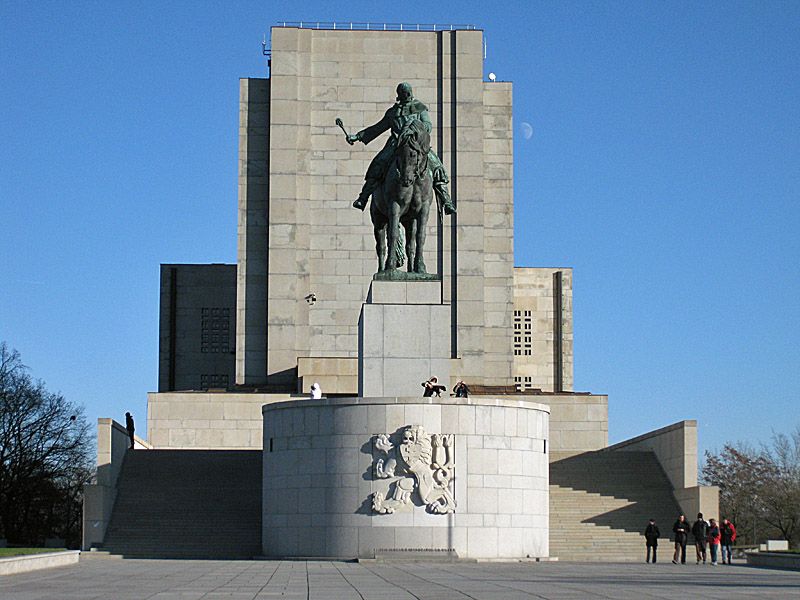 The equestrian statue stands in front of a sober, rectangular building: the National Monument. During the Communist period, the building was a mausoleum where the embalmed body of Klement Gottwald, leader of the Communist party, was laid out in 1953. The body was cremated in 1962 because it had started to decompose due to a failed embalming. However, it is more likely that the real reason was political. Gottwald’s urn was placed behind the equestrian monument. After the Velvet Revolution in 1989, his ashes were transferred to Olsany cemetery in Prague, where it was placed in a communal grave along with twenty other communist leaders whose urns had also been in the Mausoleum. The National Monument is now a museum with a permanent exhibition on Czechoslovak history

Bronze Doors of the National Monument

The monument’s heavy bronze doors were added in the mid-1950s, showing twelve bas-relief scenes. On the left door, you can see scenes from the history of the Hussite War that took place in the kingdom of Bohemia, today’s Czech Republic, in the fifteenth century when the Roman Catholic Emperor of Bohemia waged war against the Protestant Hussites. The right door shows scenes from the Soviet liberation of Prague. 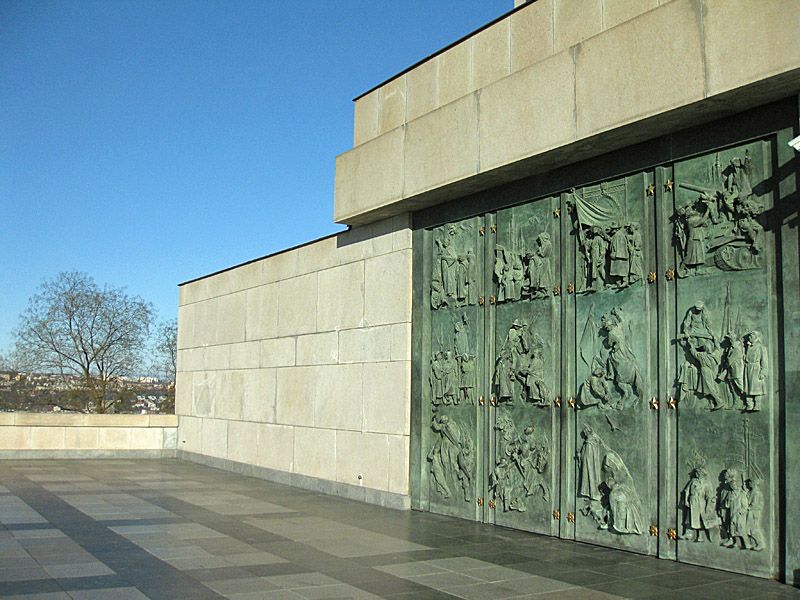 The National Monument was built between 1928 and 1938 in honor of all Czechoslovak military personnel. A large army of about 60,000 men was literally trapped between the First World War and the Bolshevik Revolution. They fought their way little by little through Siberia to Vladivostok, and from there, they went by ship via America, Ceylon, present-day Sri Lanka, and South Africa before returning to the newly independent Czechoslovakia where they received a hero’s welcome. The National Monument is now a museum. The exhibition ‘The Crossroads of Czech and Czechoslovak Statehood’ captures important turning points in the history of the 20th century. The memorial also contains the tomb of the Unknown Soldier. When you have taken in enough historical facts, you can relax in the shade of the equestrian statue and have a drink and a snack while enjoying the panoramic view of the city.

Take metro Red line C to Florenc station. The equestrian statue and the National Monument is a short walk from her or take buses no 207 or 133 from Florenc to Tachovskeho namesti and then straight up the park.