Heydrich Terror Museum is a memorial to Jan Kubis and Jozef Gabcik who died after the failed assassination of Deputy Reich Protector Heydrich in 1942. This small museum is located in the crypt of St. Cyril and St. Methodius Church in Prague. Bullet holes in the facade made by German machine guns testify to the battle that was fought here. Kubis and Gabcik, British-trained Czechoslovak paratroopers, eventually committed suicide to avoid arrest.

The small museum tells the story of the 1942 attack on SS commander Reinhard Heydrich and the subsequent siege of the church. Photos show the seven secret agents and paratroopers who were trapped here for hours by the Nazis. A text in English and Czech gives the name of the traitor, Karel Cuda, who gave away the secret hiding place for gain of money. Kubis and Gabcik committed a half-failed assassination attempt on Heydrich in Prague’s Liben district. Reinhard Heydrich died of his injuries eight days later. In retaliation, Adolf Hitler ordered the destruction of two villages, of Lidice and Lezaky.

The exhibition is in Czech and English and is supported by audiovisual material. Highlight of the exhibition are the busts of the seven paratroopers with a short description of their lives. 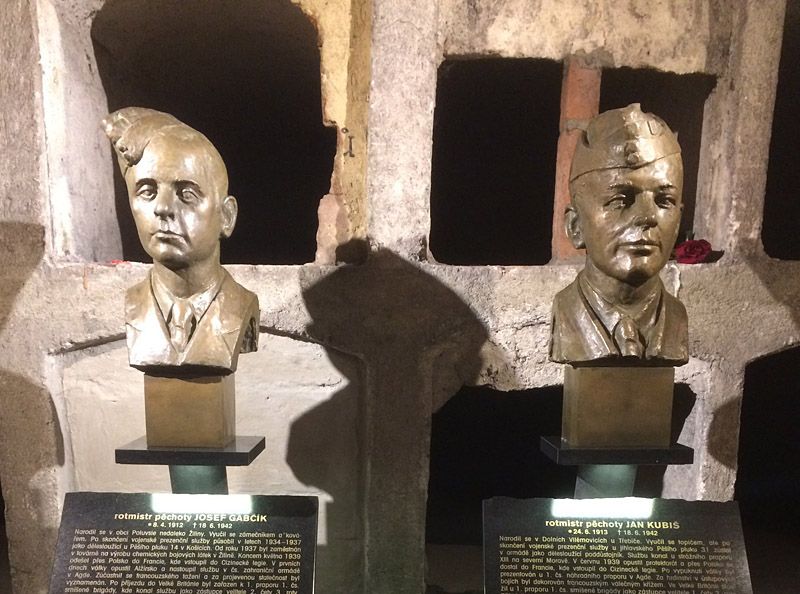 Heydrich terror in Prague began in September 1941 when Reinhard Heydrich was appointed Protector of Bohemia and Moravia (which comprised Czechoslovakia and parts of Germany and Poland). He was one of the architects of the Holocaust and had helped to prepare the Kristallnacht in 1938 when Jewish homes, hospitals and schools were ransacked throughout Germany and Austria. Heydrich’s aim was to put an end to the Czechoslovak opposition to the Nazi occupation. To reach his goal, he deported and executed members of the Czechoslovak resistance.

The Czechoslovak government-in-exile planned, together with British Special Operations, Heydrich’s assassination and named it Operation Anthropoid. Officers Jozef Gabcik and Jan Kubis together with seven other Czechoslovak paratroopers were airlifted from Britain and dropped in Czechoslovakia in December 1941. They found hiding places with the resistance in Prague. A plaque on Biskupcova Street numbers 7 and 8 shows where they were hiding. Their initial plan was to assassinate Heydrich when he was travelling on a train. Later on they abandoned this and decided to kill him when he was travelling from Panenske Brezany, where he lived, to Prague Castle, where he worked. A sharp bend in the road in the Liben district suited the assassination plan perfectly. 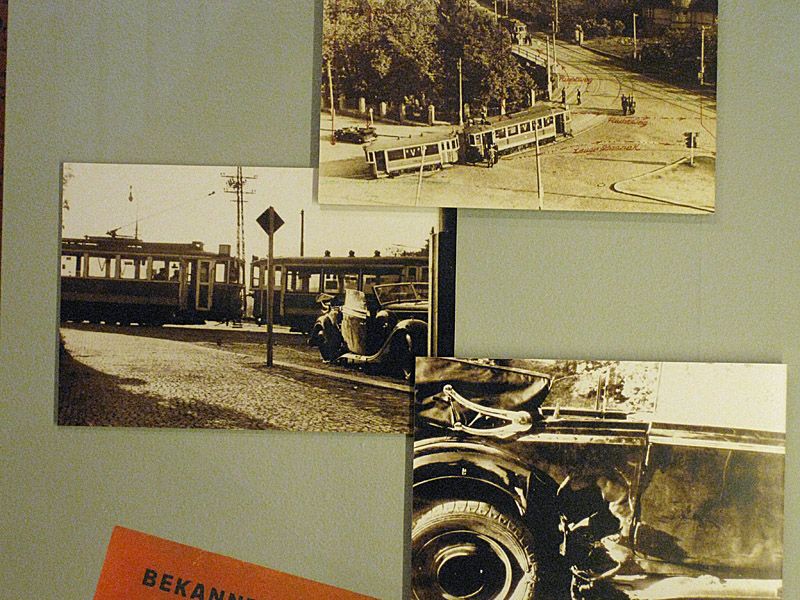 On 27 May 1942, at a hairpin turn in the Kirchmaierova Street, now Zenklova Street, in the Liben district of Prague, Josef Gabcik and Jan Kubis were waiting in ambush. Soon after half past eleven in the morning, Heydrich’s open-roofed Mercedes Benz appeared. Gabcik, ready for the snap attack, took position along the curb. He aimed at the passenger sitting in the front seat and pulled the trigger. But, the weapon failed. Heydrich’s car stopped immediately. Kubis, who stood a few meters down the road, took advantage of the situation. He dipped into his briefcase and hurled a modified anti-tank grenade which missed the target but detonated outside the car. The explosion was sufficient to injure Heydrich.

The missile destroyed the right rear part of the car, broke the windscreen, punched a tyre and displaced the car door. Parts of the car body and upholstery penetrated deep into Heydrich’s back. He suffered a broken rib, a ruptured diaphragm, and splinters in the spleen. Kubis was hurt as well. The explosion shattered the windows of a tram and passengers were injured.

Gabcik threw away his submachine gun and reached for his pistol. Heydrich and his driver did the same. However, no bullet hit the target. Almost immediately, people started running to the attempted assassination scene. Heydrich chased Gabcik but soon collapsed because of his injuries. Running after and aiming his gun at Kubis, the driver’s gun jammed and Kubis escaped. Then the driver chased Gabcik who hid in a butcher’s shop. The owner was a Nazi sympathizer and told the driver where Gabcik was hiding. Gabcik shot the driver in the leg and fled to safety. Heydrich was moved to the nearby Bulovka hospital where he succumbed to his injuries that caused sepsis on 4 June 1942.

Battle at the Cyril and Methodius Church

The paratroopers found refuge in the Czech Orthodox Cyril and Methodius Church in Resslova Street with the help of the Resistance and an Orthodox priest. Although the Gestapo searched meticulously, the paratroopers remained undetected for one month until Karel Cuda betrayed them. He identified Gabcik’s briefcase which led indirectly to the crypt. After the war, Cuda was hanged for this betrayal act. Seven hundred German soldiers armed with sub-machine guns and hand grenades assailed the church. Kubis and three fighters defended themselves with handguns in the nave. After a two-hour battle, they were killed. It was revealed that others were hiding in the crypt. The Nazis flooded the crypt and smoked out the resistance fighters with tear gas. After holding out for six hours, Gabcik and the other four paratroopers committed suicide. 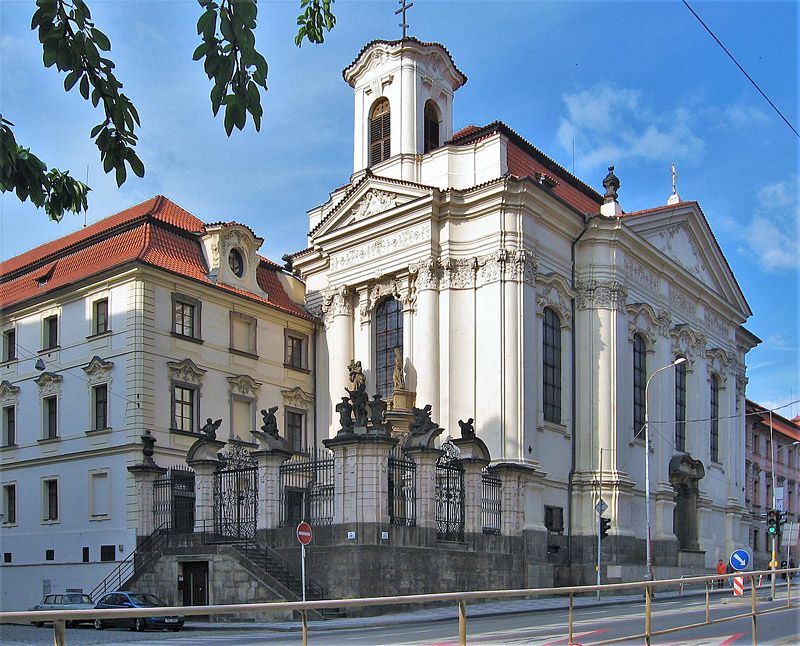 The Orthodox bishop, nine Orthodox believers and 265 resistance fighters were executed for complicity and helping the paratroopers. Hitler was furious and wanted more retaliation.13,000 Czechs were arrested, and 5,000 were murdered. Heinrich Himmler convinced Hitler to stop his reprisals as Czechs were needed to keep the Protectorate industrially productive. Due to misinformation, the Germans thought that Kubis and Gabcik were hiding in Lidice, a village near Prague. They also discovered a radio transmitter in Lezaky, another village. Hitler took revenge and ordered the killing of all 199 men in Lidice. He had 195 women arrested and sent to Ravensbrück concentration camp. Ninety-five children were taken, eight of whom were given to German families. The other children disappeared and were most probably gassed. Lidice was destroyed on 10 June 1942 and the ruins were bulldozed. The same fate struck Lezaky: all adults were murdered, the children disappeared and the village was razed. 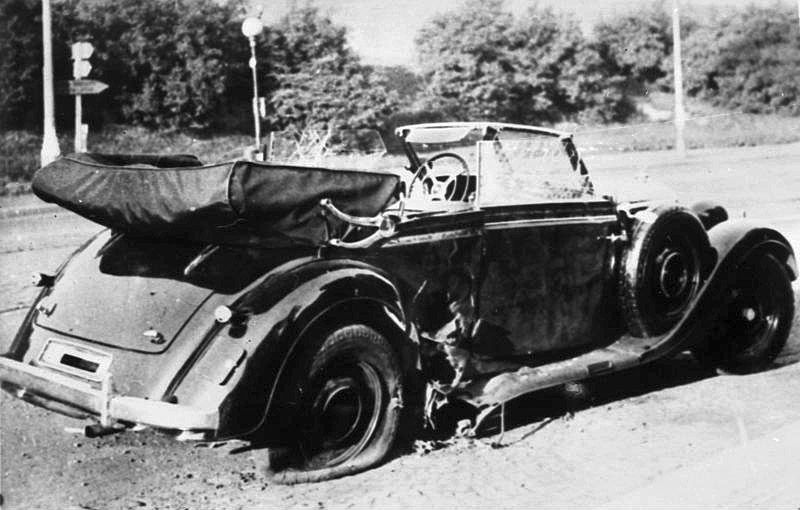 Militarily and economically, this area was important to Hitler. The industry was well developed and the region was strategically important. In 1938 at the Munich Convention, Sudetenland was assigned to Germany in exchange for peace guarantees. Inhabitants who wanted to stay in Sudetenland had to become German citizens, those who did not had to leave the area.

Heydrich’s assassination marked an important turning point in the history of Sudetenland and Czechoslovakia. It led to the dissolution of the Munich Convention. Britain and France agreed that once the Nazis were defeated, the annexed Sudetenland would be returned to Czechoslovakia and this has happened.

Heydrich was honoured with two funeral ceremonies, one in Prague and the other in Berlin. Thousands of Waffen-SS soldiers with torches lined the route to Prague Castle to pay tribute to one of the most important Nazi leaders. The ceremony in Berlin was attended by prominent Nazis, including Hitler.

Heydrich was buried in the military cemetery, Invalidenfriedhof, in Berlin. The exact spot is not known. His grave was marked by a temporary wooden cross that disappeared when the Red Army overran the city in 1945. The Allied Occupation Forces did not replace it at the end of the war. Graves of prominent Nazis should not be marked so they would not become shrines. After the war, the burial ground was in no-man’s land along the border in Berlin. Heydrich’s grave together with other high ranking Nazis was dismantled. Heydrich’s remains were removed and the location of the, now unmarked, grave is an open secret. 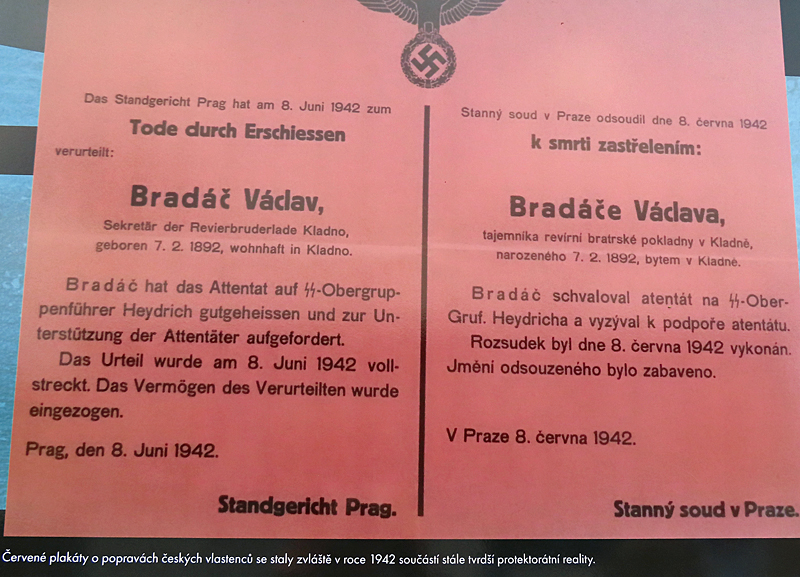 From 1942 onwards red posters about the executions of Czech patriots were to be seen in many public places.

The text reads as follows:
‘The court-martial in Prague sentenced to death by shooting on 8 June 1942. Bradac Vaclav Secretary of the Revírní Bratrská Pokladna Kladno (Health Insurance Company) born on 7 February 1892, residing in Kladno. Bradac approved the assassination attempt on SS Obergruppenfuhrer and called for support for the assassins. The verdict was carried out on 8 June 1942. The property of the convict was confiscated by the Prague court-martial.’ 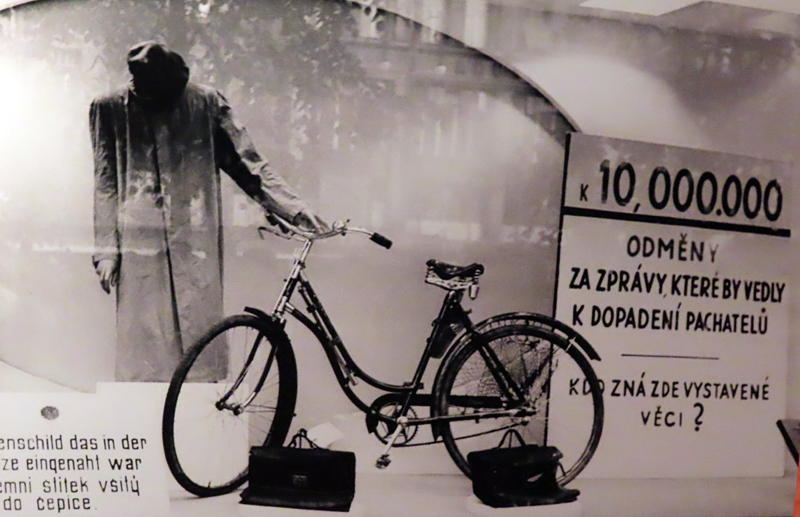 Poster in the Bata shoe shop

The poster on display in the Bata shoe shop on Wenceslas Square said:
‘10,000,000 Kr reward for any lead to the capture of the assassin. Who recognizes the items on display?’

Too short a time in Prague and no desire to figure out everything yourself? Look here for a hassle-free solution: City walk operation Anthropoid. 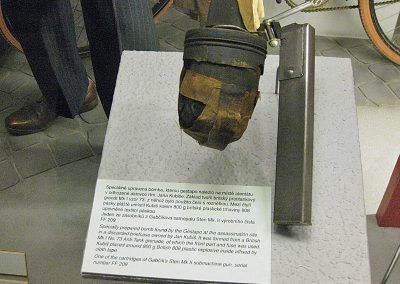 anti-tank grenade used in the assassination 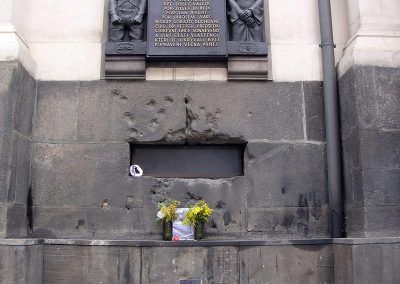 bullet holes in the church wall 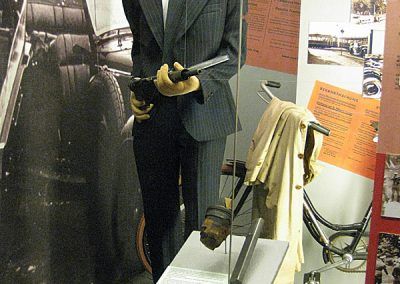 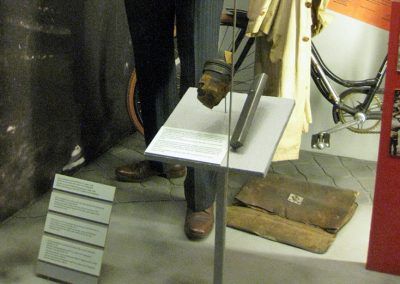 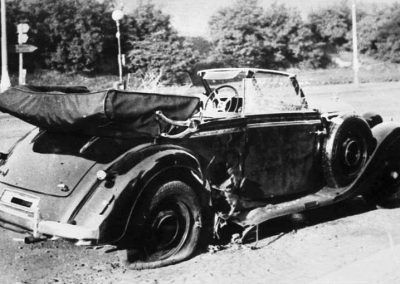 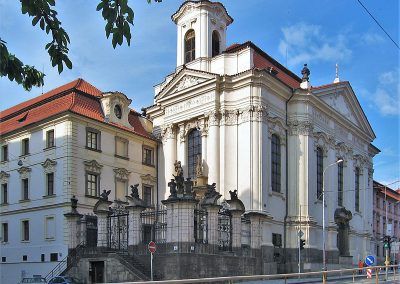 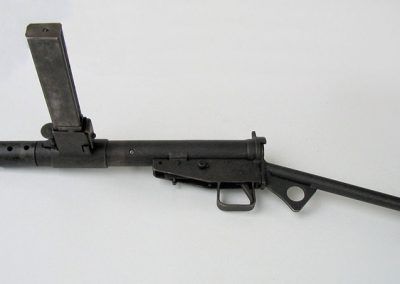 submachine gun similar to the one used in the attack 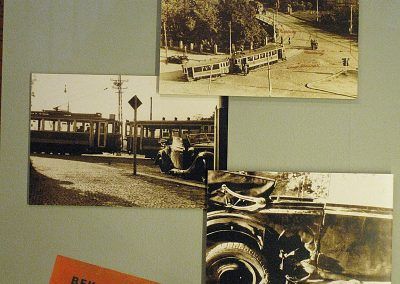 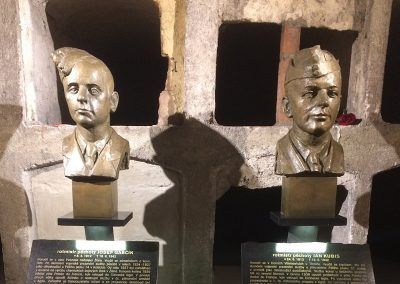 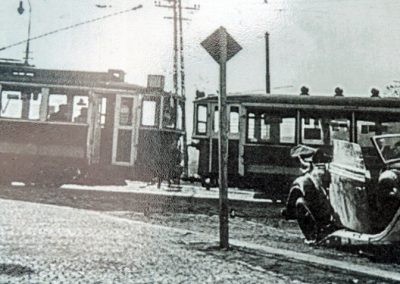 location of the assassination attempt 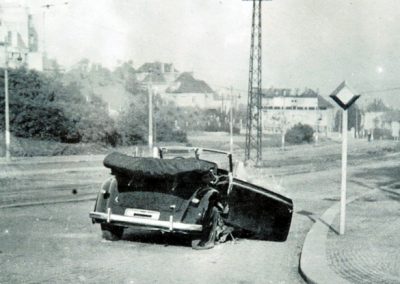 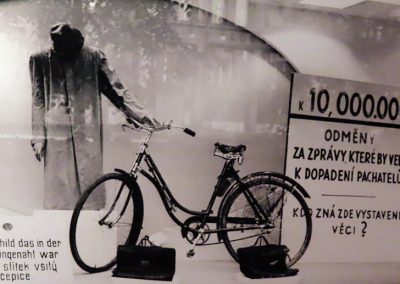 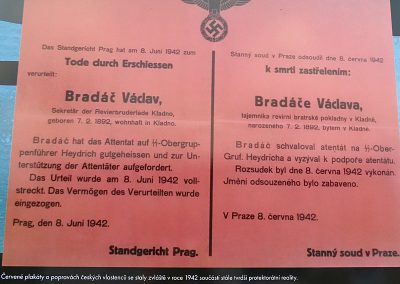 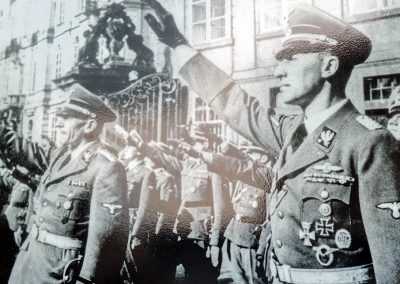 on the right Reinhard Heydrich 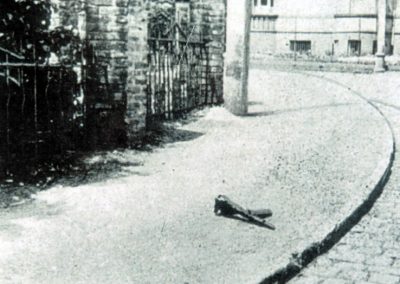 Stengun left behind after the assassination attack