Kofola is still as popular as ever. This soft drink was the Communist answer to capitalist Coca-Cola. In Communist days, the real, Western style, Coca-Cola could only be bought in Tuzex shops. This was a problem for many Czechs because these shops did not accept local currency only Tuzex coupons. Not only was Coca-Cola difficult to get, it was also expensive. Kofola has the colour of stout beer but is a non-alcoholic drink invented in Czechoslovakia as an affordable alternative for Coca-Cola. It is still as popular as ever and is served on tap in restaurants or bought in cans or bottles from supermarkets. 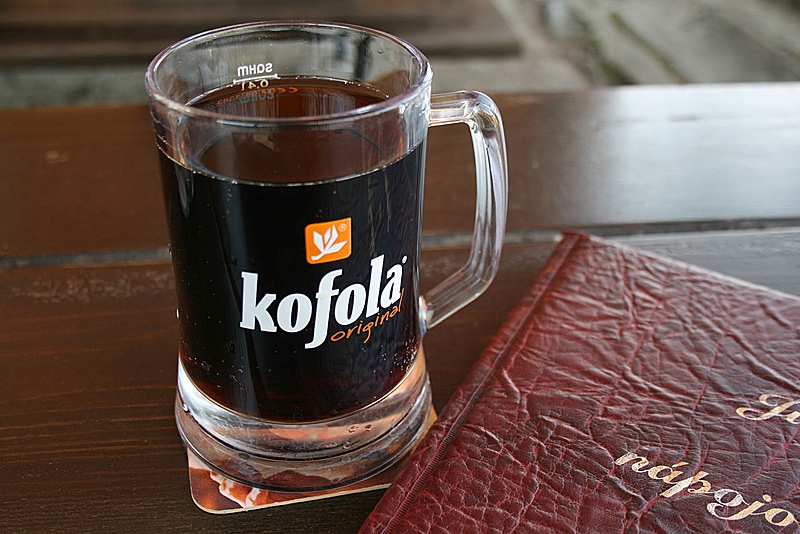 Is Kofola tastier than Coco-Cola?

Kofola is a surrogate, yet a feast for the taste buds and (a little) healthier than real Coca-Cola because it contains 30% less sugar and no phosphoric acid (added to soft drinks for a stronger taste, as all acids it causes teeth decay). On the other hand, it contains more caffeine.
As the real Coca-Cola was expensive in Communist days, a Czech chemist concocted a syrup of herbs, fruit extracts and caffeine. He added carbonated water and named it ‘Kofola’. The key ingredients are known but the original recipe is a secret.

This soft drink tastes vaguely like Coco-Cola and is certainly less fizzy. And very importantly, during communist days, it was half the price of the foreign product.

Marketing strategies were hardly employed in the tightly controlled communist market but Kofola was one of the exceptions. It advertised the brand on New Year’s greeting cards showing the image of an attractive young woman. The same ploy as the western world used and still uses: beauty sells.

As as Popular as Ever

After the Velvet revolution, many Communist brands disappeared. Consumers in former Communist countries hankered after western goods and when the regime fell, these products were within reach for everyone. Global brands like Coco-Cola took over the market share. They were and still are very successful because Czechs saw these Western brands as better quality and more trendy. In 2000, supported by a TV advertising campaign, Kofola made a comeback and regained its popularity.

All supermarkets like Albert, Billa and Tesco, and all corner shops sell Kofola in cans or bottles. Restaurants is another story because some do and others do not have it. If the restaurants has Coco-Cola on the drinks list, they do not have Kofola. After all, these brands are competitors.
Another nostalgic Communist fizzy drink is malinovka, raspberry lemonade. Buy it from the supermarket or the corner shop. Restaurants that have Kofola on the drinks list also have Malinovka. Both are on tap.
Although Kofola is now available in a variety of flavours, including lemon and vanilla, restaurants always serve the original Kofola.