Lidice Massacre, a Memorial Park and a Rebuilt Village

On 10 June 1942, the village of Lidice was wiped off the map in retaliation for the murder of SS Obergruppenführer Reinhard Heydrich. The Nazis turned their fury on this village because the villagers were suspected of hiding resistance fighters who had participated in Operation Anthropoid, the code name for the plan to assassinate Heydrich. The site where the village once stood is now a memorial park; a sloping lawn interspersed with sculptures. A paved path leads from the Memorial Monument via the rose garden to the modern, rebuilt village. 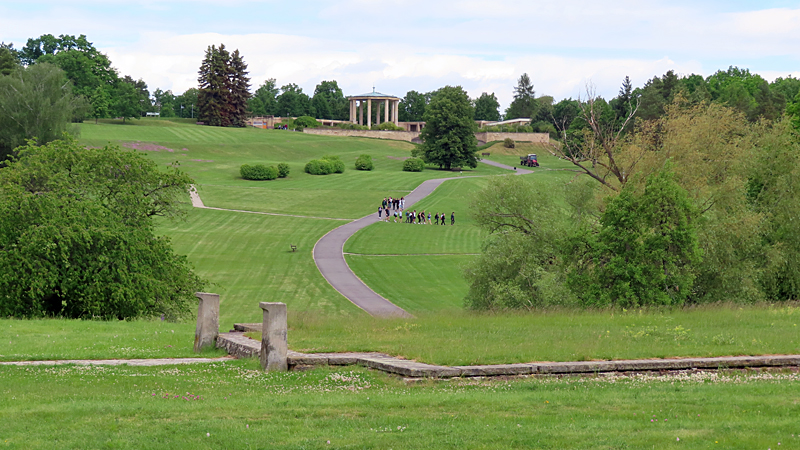 Lidice: What to see

Lidice is located about 20 kilometers north-west of Prague and can be reached by bus from metro station Nádraží Veleslavín on line A. The village of Lidice consists of two parts, the modern village and the memorial park on the site of the former village.

The Memorial Park extends from the Memorial Monument to the rose garden and from here a tree-lined avenue leads to the centre of the new village. A path winds through the park along sculptures that mark the place of destroyed houses and farms, only foundations or a few stones remain. Everywhere there are benches to rest and contemplate the past. 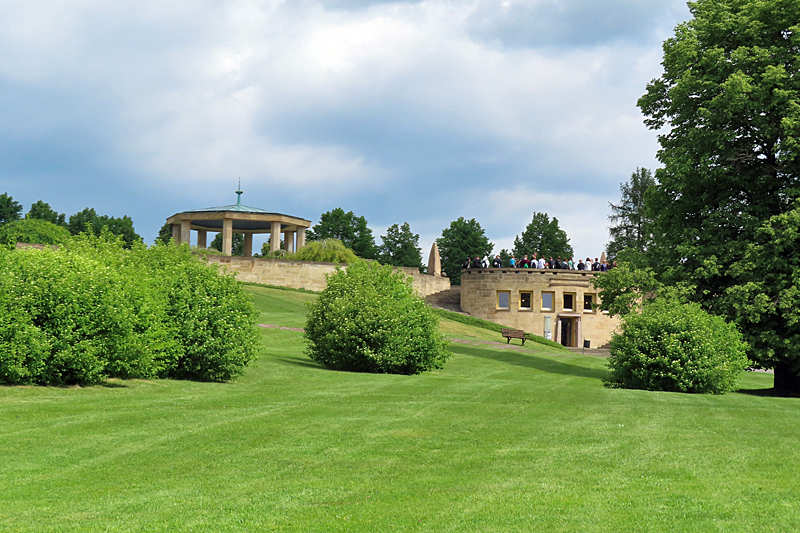 The Memorial Monument is the entrance to the park; an octagonal gloriette, the roof of which rests on high columns, on either side is a colonnade and in the middle there is a viewing terrace. In the colonnade you will find the Lidice Museum and a small, separate exhibition space (free entrance) with rotating exhibitions. 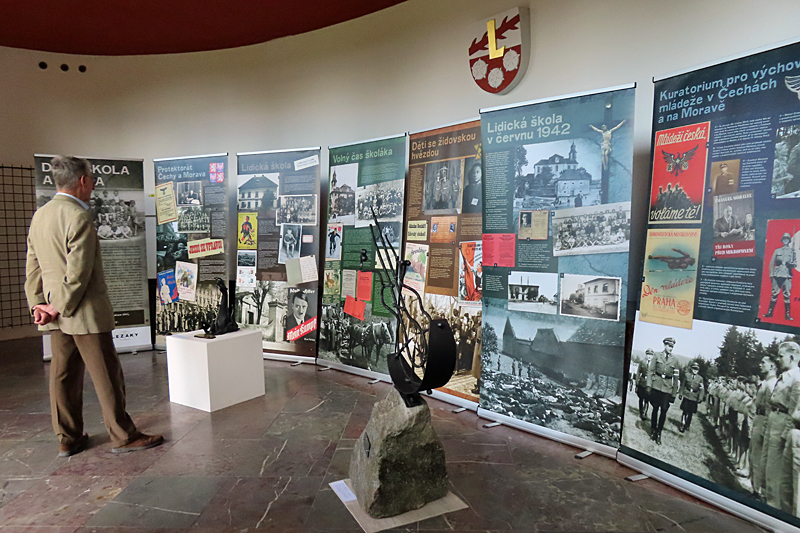 The museum visit starts with a video showing parts from a documentary made by the SS themselves when the village was on fire. This documentary served as evidence during the Nuremberg trials against the Nazi leaders in 1945. The video continues with survivors sharing how they learnt that Lidice no longer existed. A young woman expresses her frustration because she only speaks German and her mother Czech. All objects in the museum belonged to former villagers. Heartbreaking are the letters that the children in the concentration camp wrote to their families, not in Lidice but relatives further away such as grandparents in Prague or uncles and aunts in other parts of the country. Almost every child asked for food and also wrote that they were sad and wanted to go home. 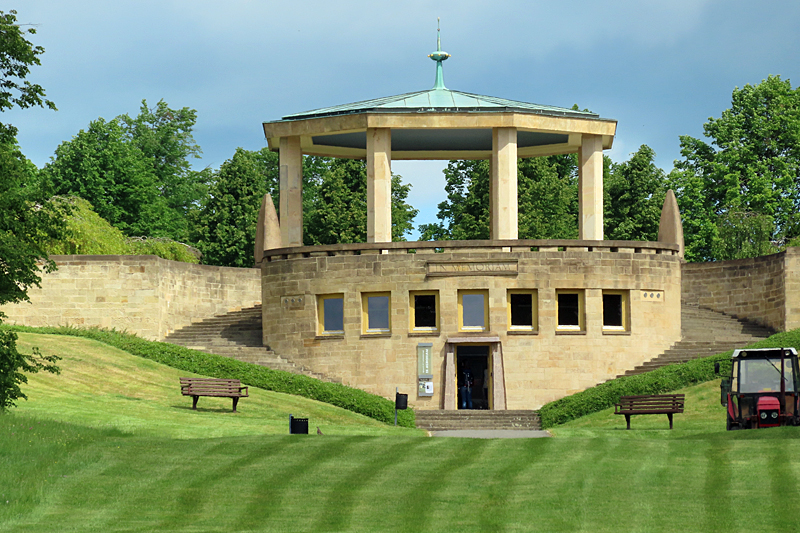 4. Sculptures where buildings once stood

House number 93 is no more than an oblong stone in the grass. The Nazis took possession of the house and operated from here. They ordered the mayor to hand over to them everything related to his office, not only documents but also the money from the local cooperative bank. 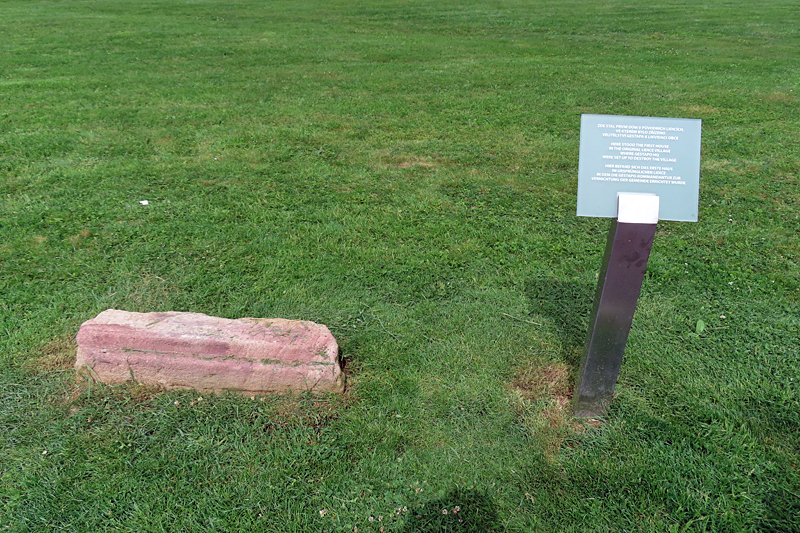 The outline and foundation of Horak’s farm are still clearly visible. All the men on the Lidice police record (one of the documents the mayor had to hand over) were herded into the basement and the stable, then in fives, and later in dozens to speed things up a bit, brought to the farmyard and shot by a firing squad. 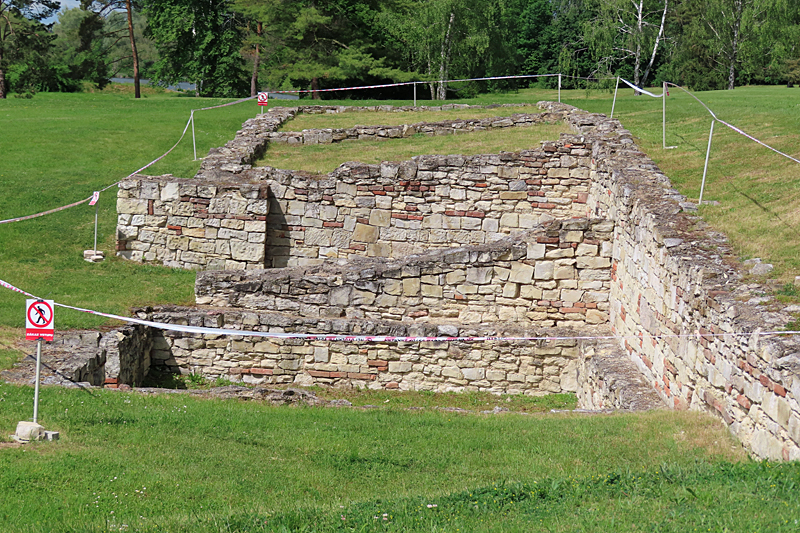 A few stones marking the layout is all that is left of the St Martin’s Church. Priest Josef Stemberka was executed in his own church, along with a number of men from the village. 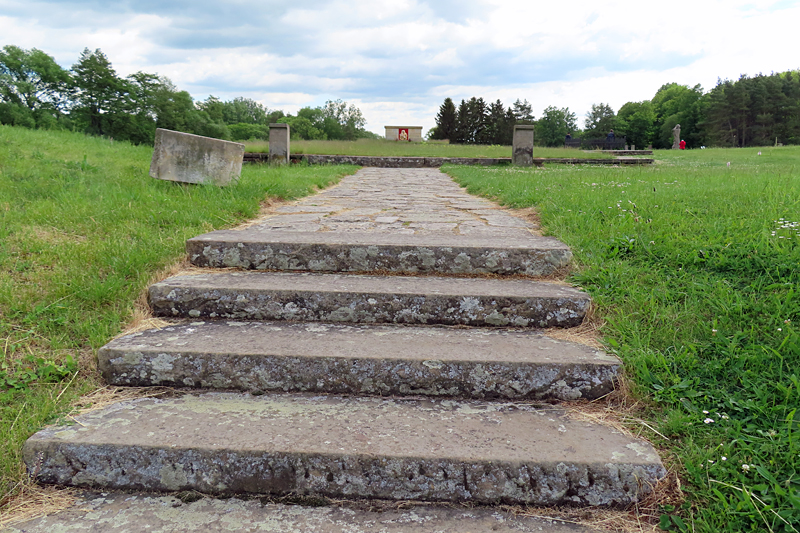 The contours of the school show in the grass. A sculpture of a woman and a child stands where the building once stood. It had one-storey, quite large for this small village as children from neigbouring villages also went to school here. The school was very modern for its days as it had central heating. 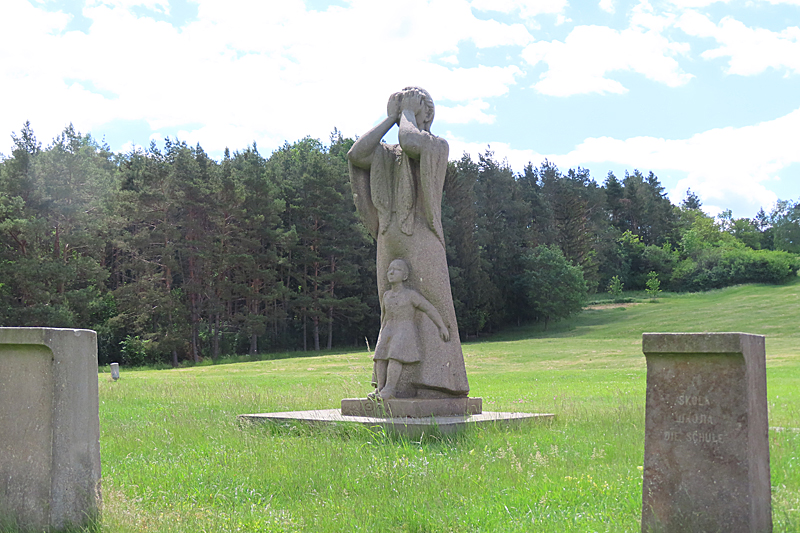 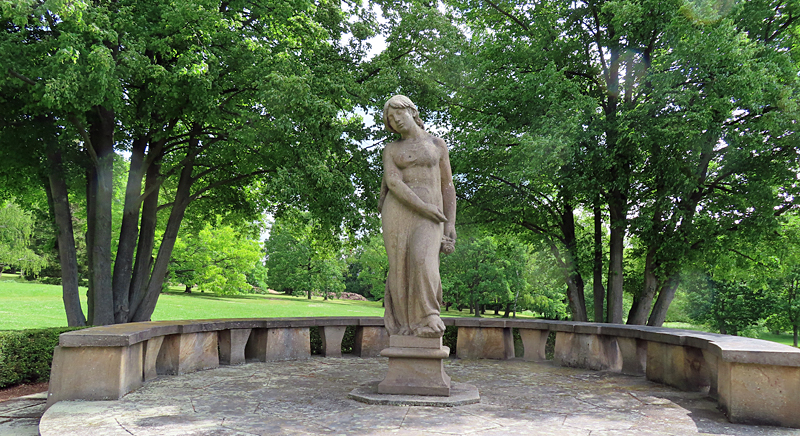 5. Sculpture of the village children

A bronze sculpture commemorates the 82 children, 42 girls and 40 boys, aged 1 to 16, from Lidice who died in Chelmno concentration camp in the summer of 1942. Sculptress Marie Uchytilová spoke with the surviving mothers and looked at pictures and class photos of the children. However, she made sure that the sculptures of the children were not fully recognizable. 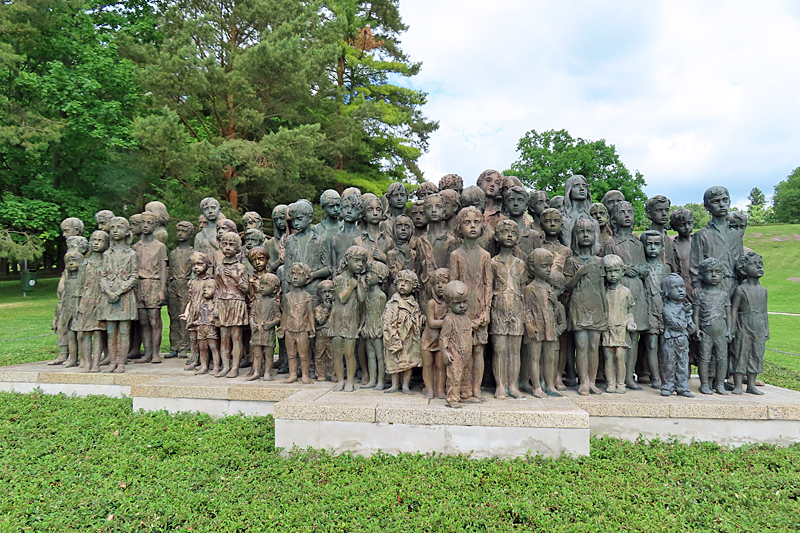 A large cross marks the common grave of 173 executed Lidice men. On 11 June 1942, one day after the burning down and the massacre, thirty Jewish prisoners from Terezin concentration camp were taken to Lidice. Their task was to dig a hole, 9 by 12 metres and 4 metres deep. The dead bodies were stripped from their shoes and their pockets searched for money and other valuables, then sprinkled with lime and soaked with water and only the following evening covered with soil. After the war, the mass grave was properly marked. At the request of the Lidice women it was never opened. 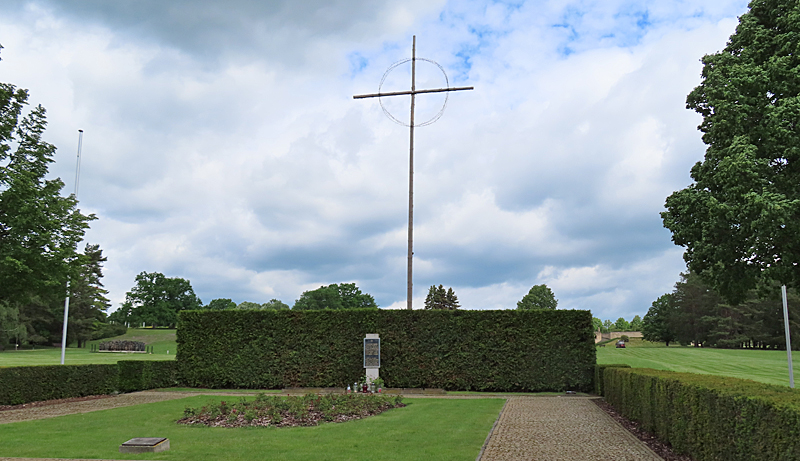 There are no gravestones left in the village’s original cemetery. The bumps overgrown with ivy show the places where the graves once were. The Nazis went on a rampage, everything had to be destroyed. They didn’t even leave the dead alone; opened the graves in the cemetery and burnt the bodies, erasing all trace of Lidice. 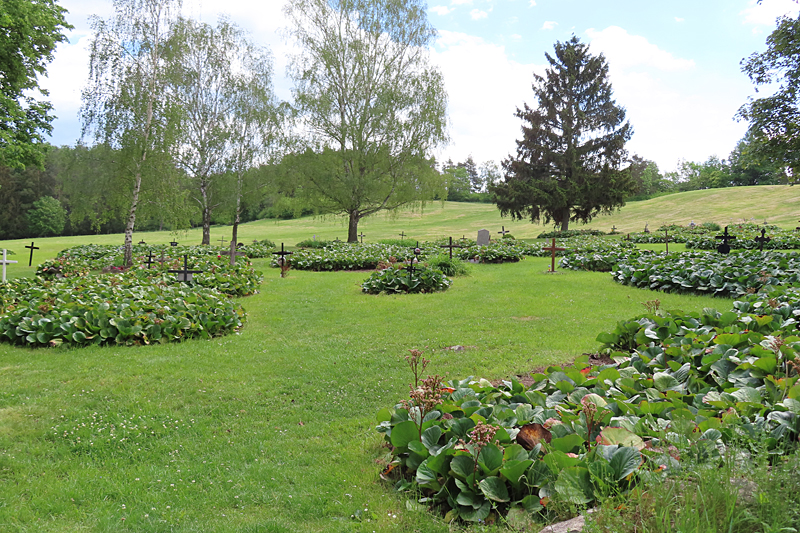 The rose garden was created at the initiative of British physician and politician Barnett Stross, who, from September 1942, was the leader of the ‘Lidice Shall Live’ campaign to help rebuild the village. As a result of this campaign, a number of towns and cities elsewhere in the world changed their names to Lidice. Stern Park Garden, now Lidice, in Illinois was the first, followed by the village of San Jerónimo Aculo, now a suburb of Mexico City, which has been called San Jerónimo Lidice since 1942. Near Rio de Janeiro in Brazil is also a Lidice and a neighbourhood in Havana is also named after the village. Girls born at that time often bear the name ‘Lidice’. The ‘Garden of Friendship and Peace’ connects the memorial park with the new village and symbolizes the transition to a new and happy life. The park contains 29,000 rose bushes from 32 countries. 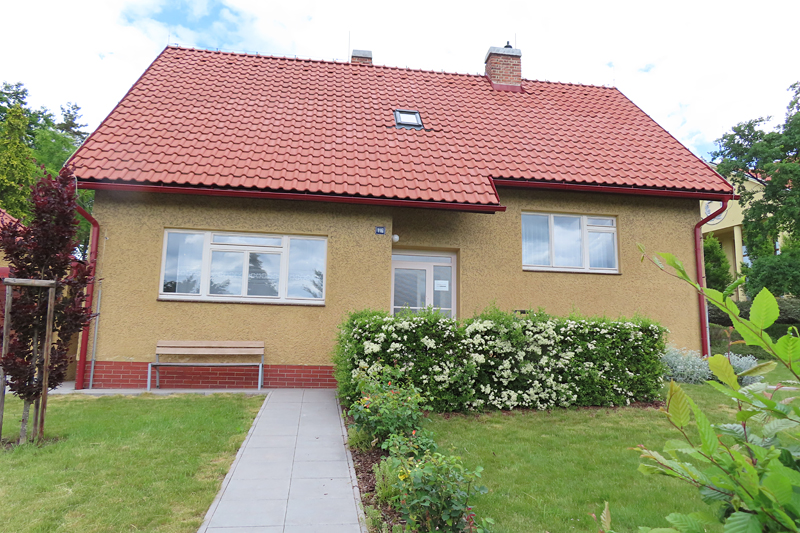 Address: Osady Ležáků Street 116
In 1947, the foundation stone of the new Lidice was laid less than 300 meters from the original village. With the help of volunteers from all over the Czech Republic, then Czechoslovakia, and from abroad, a modern village with 150 houses, a town hall, post office, cultural centre and a very modest shopping centre with about five shops was created.
The single-family home at number 116 is one of the original homes built for women and children who survived the Holocaust. What is immediately noticeable is that the house has spacious rooms and is quite large for a post-war reconstruction house. There is also has a large attic and basement, used for the laundry. 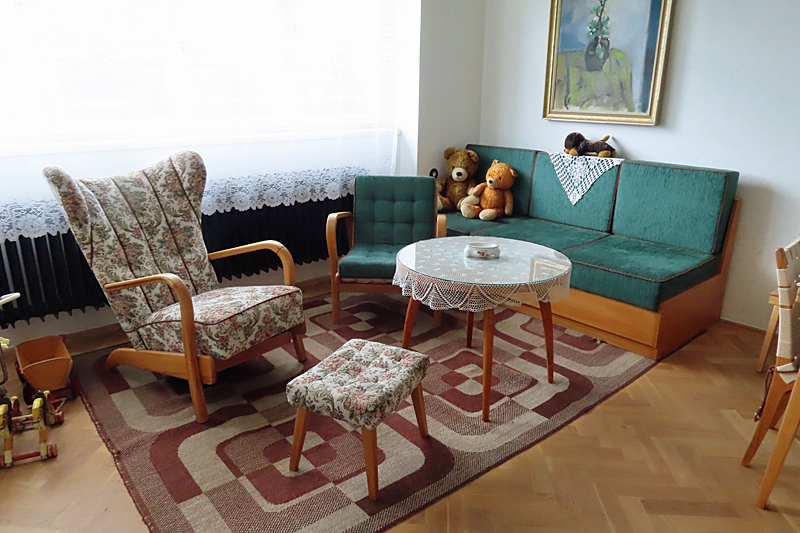 The rooms are furnished with original furniture. The living room with dining area, the kitchen with pantry, the bathroom with toilet and the master bedroom can be visited. The bedrooms have ceiling-high fitted wardrobes that make full use of the available space. The kitchen was easy to keep clean as the tops of the cupboards were covered with plastic, modern material in those days.

Originally this building was the community centre. Now it is an art gallery with a permanent exhibition of modern art by famous artists who donated their work to Lidice. 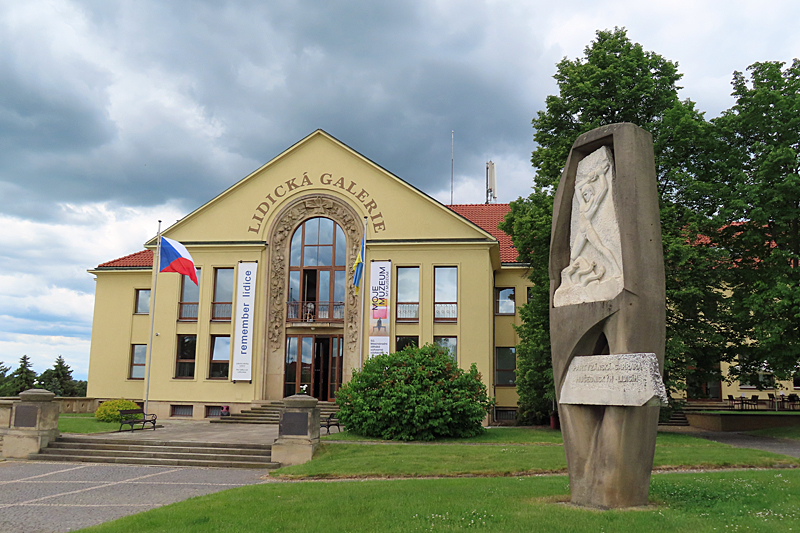 The Story of Lidice

After the assassination attempt on SS-Oberst-Gruppenführer Reinhard Heydrich on 27 May 1942 and his death eight days later, the Nazis started hunting down the attackers, but without success. Then the Nazis claimed to have received information that resistance fighters who had allegedly carried out the attack were hiding in Lidice. This, along with an intercepted, misinterpreted love letter, prompted Lidice to be razed to the ground in retaliation for Heydrich’s death.

The vague contents of the letter, addressed to a woman who worked in a factory in the neighbouring village of Slaný, was intercepted by the factory owner, passed on to the Gestapo in Kladno, who believed they saw a connection between Heydrich’s murder and the Horák family from Lidice who had two sons serving in the Czechoslovak army in Great Britain. Although house searches revealed no compromising material, weapons or other leads, and the two boys had not been in Lidice since 1939, the Nazis felt compelled to avenge the death of ‘an outstanding man of the German nation’, and they pointed their rage at the inhabitants of Lidice.

The retalliation started in the morning of June 10, 1942 and by the evening the job was done. The houses and farms in Lidice were razed to the ground; men aged 15 and over executed in the yard of the Horak family farm, children fit for Germanization (young and blonde) brought to the Reich for re-education, children who were unfit went to Chelmno concentration camp in Poland. The women ended up in other concentration camps and only a handful would return to Lidice.

But before Lidice disappeared off the face of the earth, the agricultural machinery was secured. Trucks loaded with sewing machines, prams, bicycles, motorcycles, furniture and other useful things drove to neighbouring Kladno where the Gestapo appropriated the goods.

The village was set on fire. In the weeks and months that followed, the remains of the burnt buildings were blown up, the cemetery destroyed, trees felled, the pond filled with rubble and a field railway constructed for the transport of the remaining debris. In order to erase all traces of the village, new roads were built, streams diverted, and new fields and pastures laid out.

Of the 203 women sent to concentration camps, 60 died in the camps. Only a few would return to Lidice and even fewer were reunited with thei

The Nazis only partially succeeded in razing Lidice. The original village no longer exists but the name ‘Lidice’ lives on in quite a villages and towns around the world now named Lidice, in memory of this Czech village.
On 10 June 1945, the Czechoslovak government decided to build a new Lidice. After the war, 143 Lidice women returned home, and after a two-year search, 17 children were returned to their mothers. They were the first inhabitants of the rebuilt Lidice.

Construction of the new Lidice began in May 1948, less than three hundred metres from the original village. The new Lidice consisted of 150 houses, a town hall, post office, community centre and a very modest shopping centre. Today,it is much bigger.

The site of the old village became a memorial park with the mass grave of the murdered men and a museum. The rose garden, The Garden of Peace and Friendship, connects the old village that no longer exists with the new one.