Take the Metro to the Suburbs for the Real Prague

Go to Luziny suburb and see the real Prague. Hop on Metro Line B and get off at Luziny station, a residential area full of ten-storey blocks of flats. Prague has 1.3 million inhabitants and this type of suburb is where most residents live. The blocks of flats looked drab and grey in Communist days, but have now been painted in cheerful pastel colours. All Prague suburbs are full of prefabricated blocks of flats built in the 1970s and 1980s. This was a quick way of building and new houses mushroomed up to meet a burst of population growth on the outskirts of Prague. 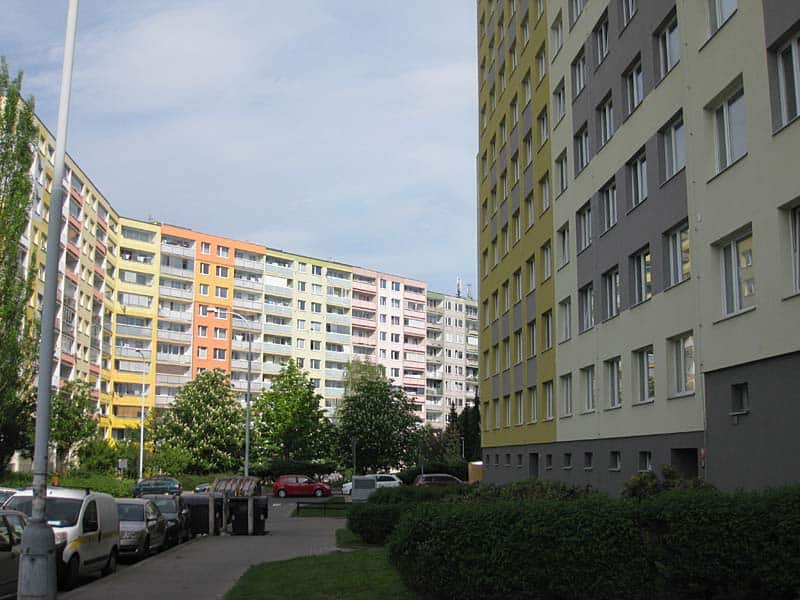 The apartments in the blocks of flats in Luziny are small – two or three rooms and not more than sixty or seventy square metres. This is the type of dwelling where 40% of Prague residents live. Suburbs are often synonymous to crime, unemployed youths and unpleasant atmosphere. Is Luziny a no-go area? Absolutely not! With the current prosperity in Prague there are no bad neighbourhoods in the city. (In fact the historic centre is more ‘dangerous’ because of the occasional pickpocket operating here) So take the metro or tram and get off at Luziny, far away from the city centre, and discover the ‘real’ Prague. 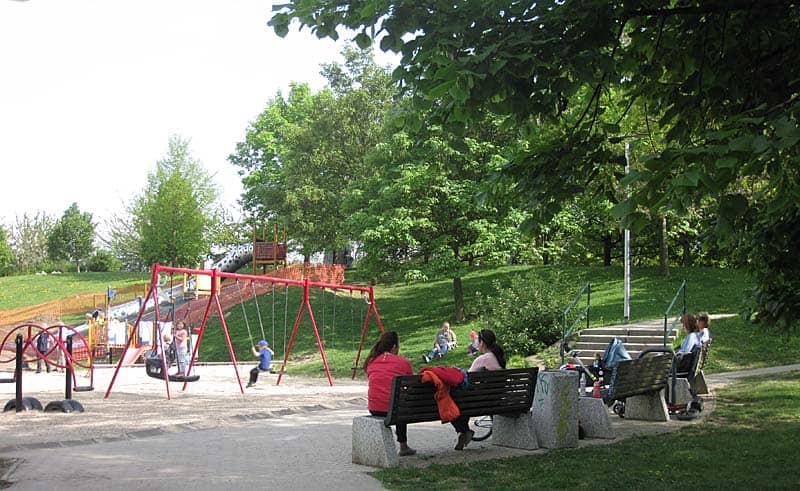 Mothers with Children in the Suburbs

The entrance to Luziny is through a passage way in one of the apartment buildings. What strikes you first is the greenery. Your second impression is the monotonous, very long and tall wall with hundreds of windows. Right in the middle of Luziny residential area is a park with a children’s playground. No matter what time of the day you come, there are always mothers with young children playing in the sand, rushing down the slide or clambering on to the climbing frames. Young mothers enjoy maternity leave until their child is three years of age. Their employer is obliged to keep her job vacant. When they have a second child within this three year period their maternity leave can be as long as six years 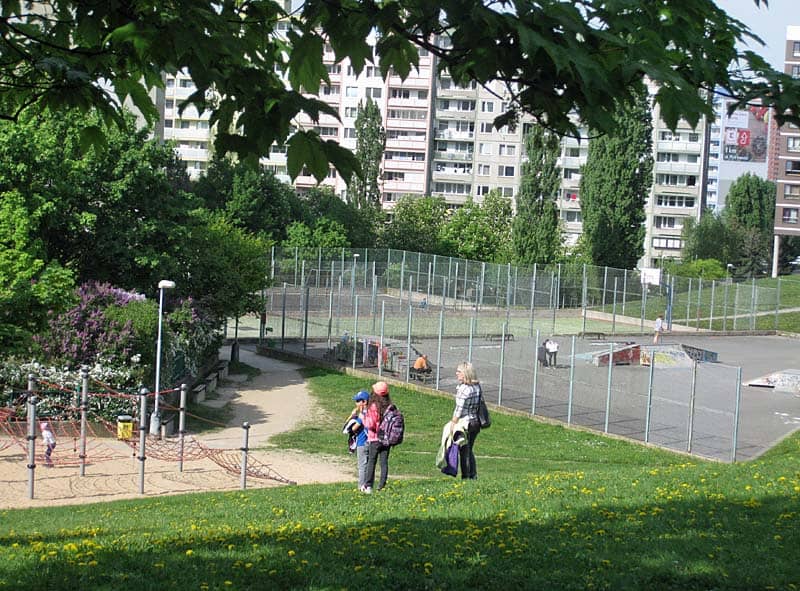 The Luziny Estate (Sidliste Luziny) was built between 1971 and 1990 and is located in the southeast of Prague. Luziny is characterized by winding residential strips of apartment blocks; some form a full circle and others half circles. In the middle of each circle are public facilities such as schools, playgrounds and sports fields. Cars cannot enter the estate. Parking spaces are located on the outside of these residential areas. Pedestrian bridges and footpaths meander through the estate and are ideal for a stroll. The metro station and the shopping centre are located in the middle of the area. 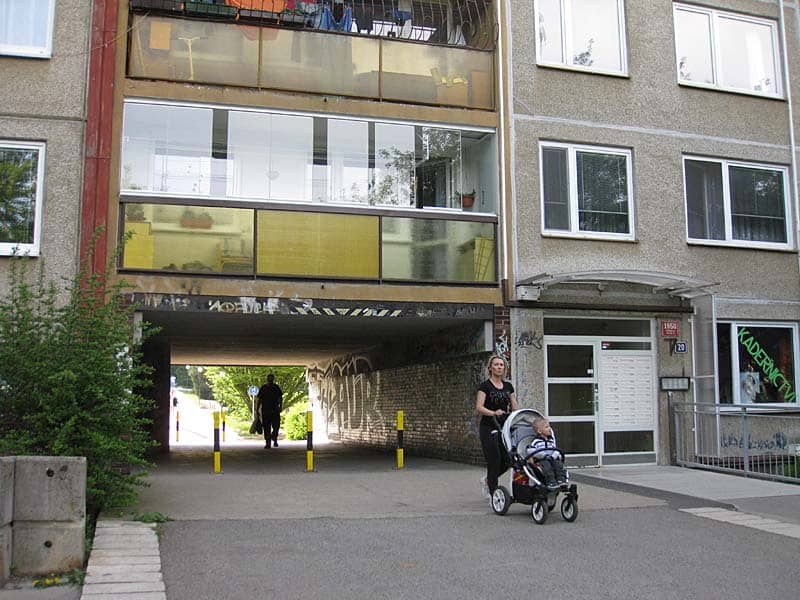 Almost all Prague suburbs are similar. Housing construction was standardized and prefabricated as it was in the Soviet Union – former Czechoslovakia followed the example. This type of construction is called ‘panelak’ in Czech – prefabricated building. It consisted of factory-made components that are assembled on the building site. This resulted in monotony: all houses have the same lay-out, the same size, the same colour.

To make the area a more exciting place to live, developers experiments with where to locate the blocks of flats in relation to each other, how to lead the traffic through the area and how to organize the shops, the sports facilities, the outpatient clinic and the schools. Luziny is different from most other suburbs because buildings were places in circles and no vehicles were allowed within the circles. 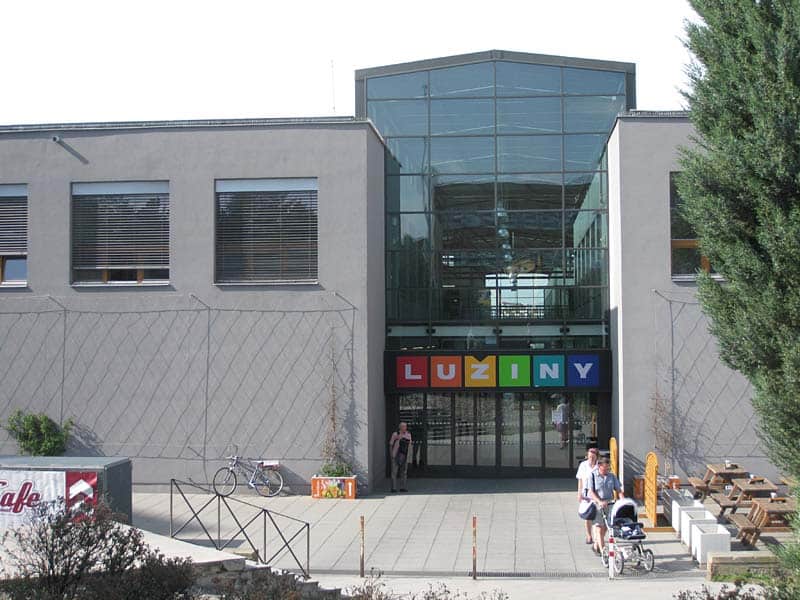 Be sure to visit the Luziny area if you want to experience a different and non-touristy Prague. There you will find no historic buildings, no souvenir shops, no tourist traps and no tourists. What you will find are find pastel-coloured ‘panelak’ blocks of circling flats. Circles and half circles of homes embrace playgrounds full of children and their mothers, with a metro station and a shopping centre right in the heart of Luziny neighbourhood.