Prague bridges make it easy to cross the Vltava River. In total there are 18 bridges, 4 of which are railway bridges and 3 pedestrian only. A 19th bridge is being planned.  From 1158 to 1841, there was only one bridge: Charles Bridge, which was first called Judith Bridge, then Stone Bridge, and finally Charles Bridge. There were and still are ferries for foot passengers. Only in 1841 was the second bridge built, Emperor Franz I bridge a chain bridge that was demolished to make way for the current bridge, Legii Most (Legion Bridge). 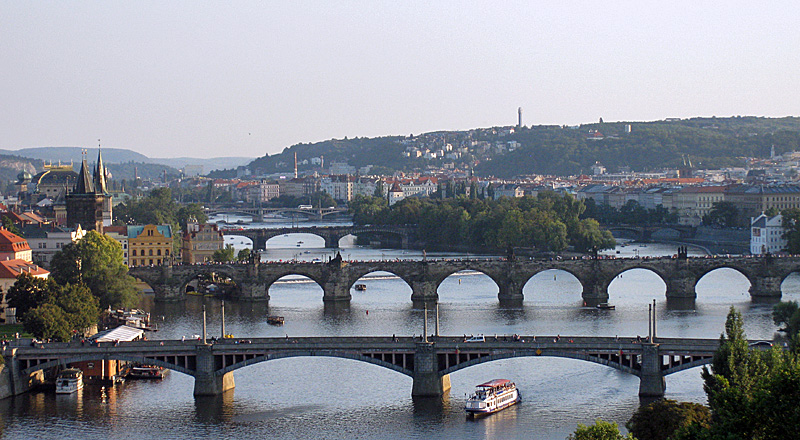 Name: This railway bridge is also known as the Bridge of the Intelligentsia
Year of construction: construction started in 1949 and was completed in 1955, made of reinforced concrete with walkway next to the track, 910 meters long and 14 meters wide. Train connection is from Prague to Pilsen.
Particulars: The unofficial name, the Bridge of the Intelligentsia, is only used by older people. After the communist took over in 1948, the Czechoslovak intelligentsia was forced to work as labourers. Many Prague intellectuals worked on this bridge, hence its name.

Name: The name refers to the Barrandov district
Year of construction: The southern part dates from 1983 and the northern part from 1988. The length is 352 meters and the width 40 to 55 meters with eight lanes and a pedestrian walkway.
Particulars: The bridge is made of concrete and a prime example of brutalism. Hrosi Lazen, Hippo bath, is a concrete sculpture on the bridge. It is an important thoroughfare and 136,000 cars cross the bridge every day. 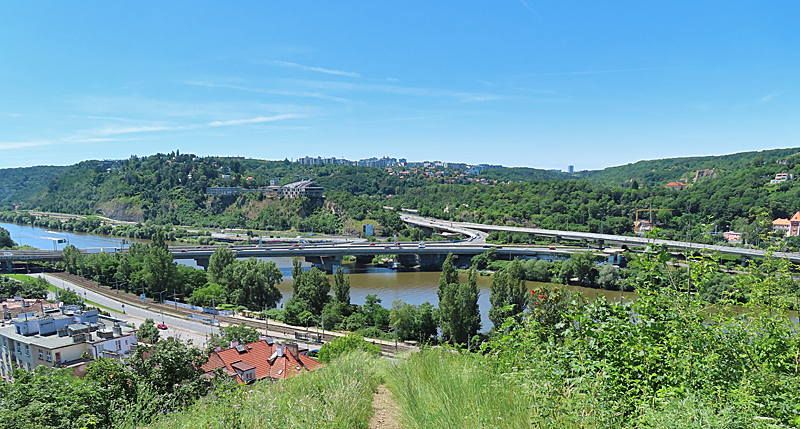 Name: The railway bridge has no official name. Some call it Vysehrad Railway Bridge.
Year of construction: built between 1871-1872. It was single track connecting Franz Joseph Station (now Prague Central Station) and West Station (now Smichov). As it soon turned out that one track was not sufficient, a double track was built in 1901. The bridge is 69.9 m long and 8.1 wide with a footpath on both sides of the track.
Particulars: The view to the north is St Vitus and Prague Castle, to the south Vysehrad and at the foot of Vysehrad hill cubist houses. Kovarovic Villa is special because not only the house but also the garden gate, window frames and front door are in cubist style. 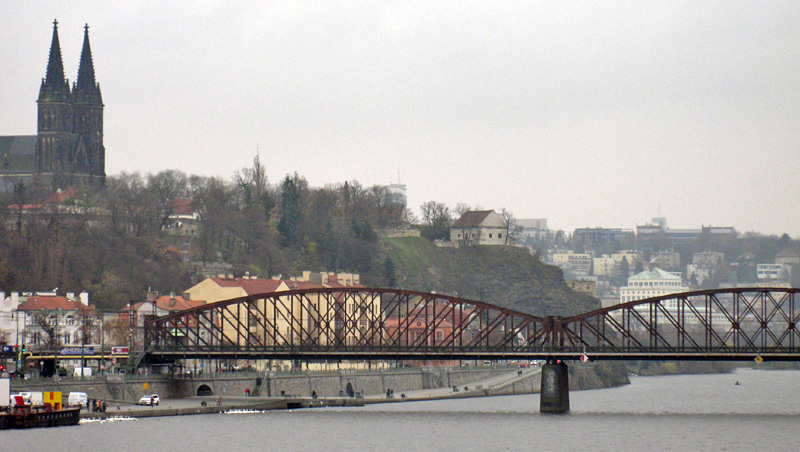 Name: The original name was Stone Bridge to Smichov. Its current name refers to Frantisek Palacky (1798-1867), historian and politician who contributed to Czech National Revival. He was regarded as ‘Father of the Nation’. During the Nazi regime the bridge was called Wolfgang Amadeus Mozart Brücke.
Year of construction: 1876. The bridge is made of granite blocks of different colours and is 228m long and initially 7.7m wide, but widened to 13.9m after the 1945 February bombing. The sculptures on the bridge, made by Myslbek, were also damaged. After repair works, they did not return, but are now the garden of Vysehrad.
Particulars: The entwined towers of the Emmaus Monastery are clearly visible. The monastery was also badly damaged in the 1945 bombing. The new towers were added in the 1960s. The development of the Smichov district was the reason to build this bridge.

Name: The bridge is named after Alois Jirasek (1851-1930), writer and politician. His statue is opposite the Dancing House in a small park.
Year of construction: construction started in 1929, the bridge is 310m long and 21m wide. It was built in the interbellum period and with new wars in mind. The pillars of the bridge can be filled with explosives so that in case of an invasion the bridge can be blown up. The Nazis filled the pillars with concrete so that the resistance could not blow up the bridge.
Particulars: View from the bridge of Detsky and Slovansky islands, Sitkov water tower, Manes Gallery and the Dancing House.

Name: The bridge is named after the Czechoslovak legion in World War I when Bohemia (and Prague) were part of the Austro-Hungarian Empire.
The bridge has had several names
1841–1901: Císaře Františka I – Emperor Franz I Bridge, a chain bridge
1901- 1919: Most Císaře Františka I – Emperor Franz I Bridge. The new bridge had the same name as the chain bridge
1919–1940: Most Legií – Legions Bridge
1940–1945: Smetanův Most – Smetana Bridge, named after the composer Bedřich Smetana
1945–1960: Most Legií – Legion Bridge
1960–1990: Most 1. máje – May 1 Bridge, named after Labour Day
from 1990: Most Legií – Legion Bridge
Year of construction: 1899-1901 to replace a chain bridge. The bridge is 345.5 m long and 16 m wide and has nine oval arches. The architectural style is a combination of neo-baroque and art nouveau. There are two toll booths on the bridge.
Particulars: In the middle of the bridge, a wide staircase leads to Shooters Island, Střelecký ostrov. In the Middle Ages archers trained here and later the army used the island for target practice. The island is home to a restaurant with outdoor seating offering magnificent views of the Vltava River and the National Theater.

Name: the bridge is named after Emperor Charles IV. The predecessor of Charles Bridge was the Judith Bridge, which was destroyed after a flood in the fourteenth century. Charles Bridge’s original name was Stone Bridge, unlike the Judith Bridge, it was built of stone.
Year of construction: 1357-1402. The bridge has been named Charles Bridge since 1870, 516m long and 13.4m wide with 16 arches and thirty statues which are all replicas. The originals are in the Lapidarium museum.
Particulars: Prague’s most famous bridge and pedestrians only. Two bridge towers that be climbed. It is Prague’s number one landmark. 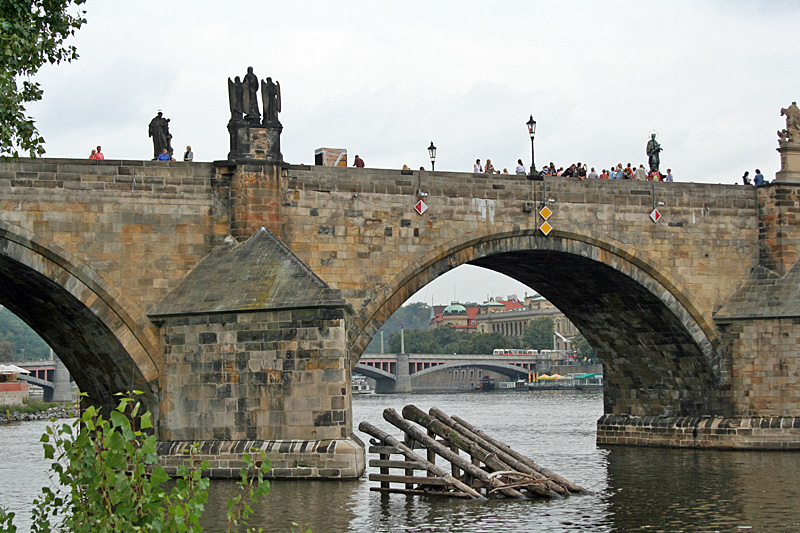 Name: named after the Czech painter Josef Manes (1820-1871). The original name was Archduke Franz Ferdinand Bridge (whose assassination in 1914 triggered the First World War). In 1920 the bridge got its current name.
Year of construction: 1911-1914 and officially opened in 1916. The bridge replaced the nearby pedestrian bridge, the Rudolf Bridge. The length is 186m and the width 16m, a concrete bridge with four arches in cubist style.
Particulars: The Walk of Fame on the bridge consisting of copper stars, a tribute to Czech composers, was created in 2009. Next to the bridge is the Rudolfinum, a neo-Renaissance building now a concert hall and art gallery. 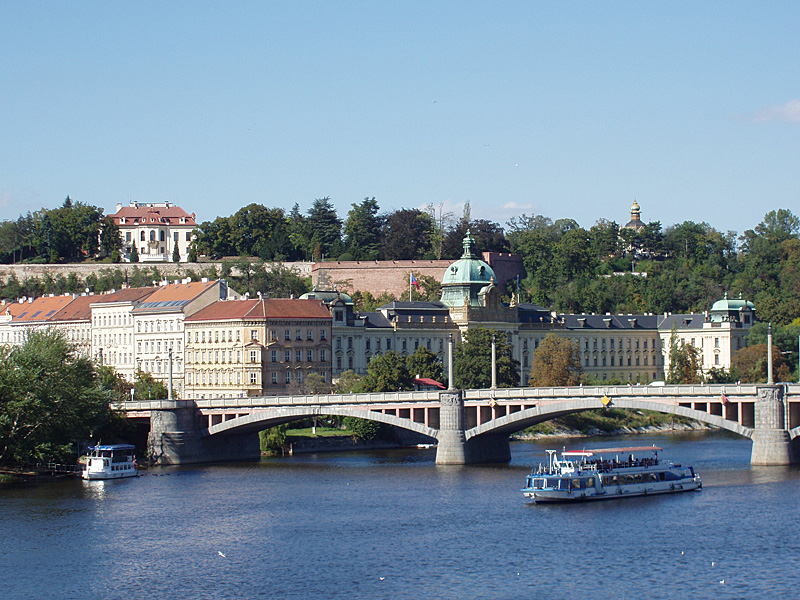 Name: often shortened to Čechův most and named after the Czech writer, journalist and poet Svatopluk Čech (1846-1908). During the Nazi occupation (1940-1945) the name was Mendelův, named after Gregor Mendel (1822-1884) scientist of German descent and founder of modern genetics.
Year of construction: between 1905 and 1908 part of the inner ring when a large part of the Jewish ghetto, now the Josefov district, was demolished. 170 meters long and 16 meters wide, the only bridge in Art Nouveau style. On the side of the bridge female figures holding torches. On both ends four pillars with figures of genii, good spirits, and six-headed hydra figures guarding the Prague coat of arms.
Particulars: The bridge leads from Letna Hill to Parizska Street, an up-market shopping street. 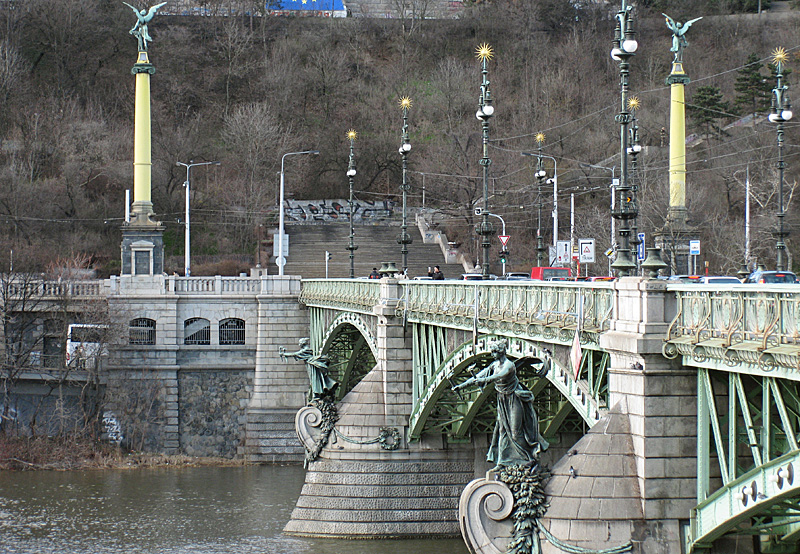 Name: named after Milan Štefánik (1880-1919) soldier, aviator, meteorologist and mathematician. During the Second World War the name was Leoš Janáček Bridge and during the communist regime Švermův Bridge after Jan Šverma (1901-1944), politician, journalist and a friend of Klement Gottwald.
Year of construction: the bridge replaces the original Franz Joseph suspension bridge from 1868, the largest cast iron structure in Prague at the time. This bridge was dismantled between 1946 and 1947 to be replaced by the Štefánik Bridge that opened in 1951. It is made of reinforced concrete and is 263 meters long and 24.4 meters wide
Particulars: the bridge connects Revolucni Street with the Letna tunnel. Close by on Letna Hill is the Letna beer garden and the Expo 58 pavilion.

Name: named after Josef Hlávka (1831-1908), architect and designer of the bridge.
Year of construction: the bridge was built in two parts: 1908-1910 an iron bridge connecting the Karlin district with Stvanice island and 1910-1912 the connection between the island and the Holesovice district was built. From 1958 to 1962 major renovations in which all metal parts were replaced by concrete. Length is 96 meters and the width is 16 meters
Particulars: the bridge is part of the motorway from the Austria to the German border. Medallions with reliefs depicting the faces of former Prague mayors are above the arches on the river side of the bridge.

Name: railway bridge named after the Austrian engineer Alois Negrelli (1799-1858), co-designer of the Suez Canal. The viaduct connects Masaryk Station with Praha Bubny station in the Holesovice district.
Year of construction: between 1846-1850 to connect Olomouc-Prague-Dresden. The bridge is made up of 87 stone arches, eight of which are in the Vltava River, the length is 1100m and the width 7.6m. Renovation works took place between 2017 – 2021, preserving the original design as much as possible.
Particulars: The bridge made of granite is a feat of craftsmanship and a novelty because in the nineteenth century there were only wooden bridges. It was a huge engineering work in which 3000 workers were involved as well as steam engines to lift heavy parts.
Today Negrelli Viaduct is the first part of the future connection from Masaryk Station via Prague Vaclav Havel Airport to Kladno.

Name: Holesovice Karlin Bridge connects these two districts
Year of construction: 2022. Bicycles and pedestrians are separated from each other by a small difference in height.
Particulars: the bridge has an exit to the Stavanice island and replaces the ferry.

Name: Until 1939 the bridge was called T.G. Masaryk Bridge, named after the first president of Czechoslovakia.
1939-1940: Baxův Most – Baxa Bridge after Karel Baxa, mayor of Prague from 1919-1937
1940-1945: Libeňský Most – Libeň Bridge after nearby Libeň district
1945-1952: Baxa Bridge
1952-1962: Stalingradský Most – Stalingrad bridge after the town of Stalingrad, present-day Volgograd
From 1962: Libeň Bridge
Year of construction: between 1924-1928, the bridge is 400 meters long and 21 meters wide, made of concrete with five arches and no ornaments.
Particulars: The bridge replaces a wooden bridge that had connected the Holesovice and Libeň districts since 1903.

Name: named after the Bulovka district
Year of construction: 1976, 310 meters long and made of prestressed concrete.
Particulars: The railway bridge connects Prague Holesovice station with Rokytka-Liben station. It is the only bridge that crosses the Vltava diagonally.

Name: Named after the Prague Uprising that started on 5 May 1945 and ended with the Wehrmacht’s withdrawal from Prague on 8 May. A day later, the Red Army marched in.
Year of construction: built in 1928 and originally named Troja Bridge, renamed Barricade Bridge in 1946.
Particulars: A north-south thoroughfare, connecting the Holesovice district with Liben and Troja and the D8 motorway via Usti nad Labem to Dresden (Germany). Next to the bridge is a sculpture commemorating the Prague Uprising.

Name: Refers to the Troja district
Year of construction: 2014, length 262 meters, width is 36 meters. The arch is only 20 meters high which is an engineering feat, because for a bridge this length the arch should be 50 meters. The bridge connects the Troja and Holešovice districts.
Particulars: A state-of-the-art, slender, elegant bridge that in no way resembles any of the other bridges in Prague. It is the only bridge over the Vltava that does not rest on pillars, but has an arch construction. In the evening, the bridge is illuminated with alternating colour effects.

Name: Troja Foot Bridge
Year of construction: 1984 a 4-meter concrete footbridge that collapsed in 2017. The current steel bridge dates from 2020.
Particulars: connection between the Emperor’s Island (Cisarsky Ostrov) and the Troja district. It is an important pedestrian route between Stromovka Park and Troja Castle, the zoo and the botanical garden. 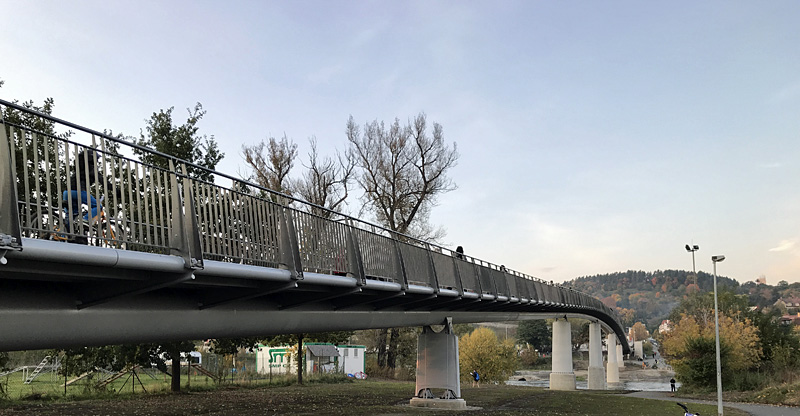 Name: Named after Czech-born Madeleine Albright, who was the first female Secretary of State in US history. When she passed away in March 2022, it was decided to name the bridge in het honour instead of Dvorecky most (Dvorce bridge).

Particulars: this bridge will fill the gap between between Barrandov Bridge and Palacky Bridge. It is intended for public transport, cyclists and pedestrians, no cars. The bridge will be in the Dvorce district at Jeremenkova street with a connection to Smichov and the Lihovar tram stop.