Prague metro opened in 1974 and is similar to those in London (1863), Paris (1900) and Moscow (1935). In terms of architecture, the Prague Metro is a simpler version of the Moscow Metro. This is not surprising because the Prague network was built during the communist regime, copying the Russian example. The rolling stock was also Russian in origin.
The Prague metro carries about 620 million passengers a year, runs frequently and is user-friendly. There are three lines with 62 km of tracks, mostly underground, and 61 stations. New stations are still being added to the existing lines. The new Line D will be operational in 2029. 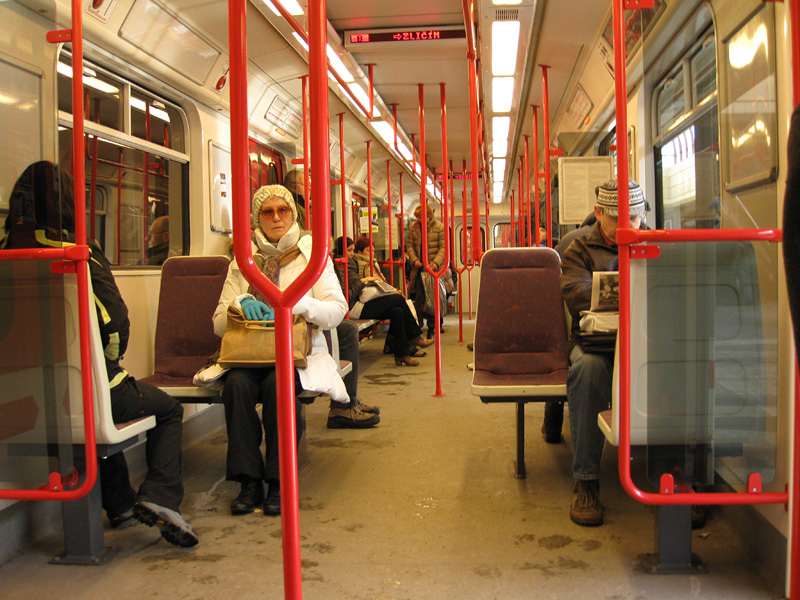 Early beginnings of the metro

The idea for an underground network was conceived in 1898 by engineer Ladislav Rott, the founder of the V.J. Rott society housed in the U Rottu house on Male Namesti. His plan came at a time when parts of the old city were being demolished because of the construction of a new sewage system and water treatment plant. Rott’s plan was to build tram tunnels at the same time. However, the city council was against these plans and they were put on the shelf. More about this sewage system, now a museum

The metro comes into the picture

In 1926, the underground network was back on the agenda and for the first time referred to as: metro. This plan was drawn up by Vladimir List and Bohumil Belada. There is a plaque at Museum metro station in commemoration. The original plan was to build an underground tram network and in 1931 a contest was rolled out ‘how to solve the transport problem in Prague’. A year later, the decision was made to build the metro as we know it today. The Second World War delayed the project and all work was halted after the war due to the unstable economic situation. 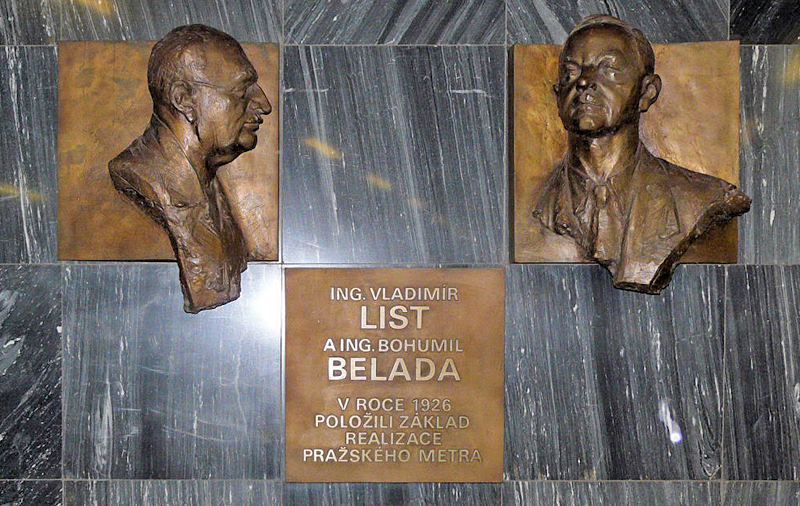 The construction of the metro network

In the early 1960s, the metro was again put on the agenda. The plan involved still an underground tram network. Finally in 1966, construction of the first station, Hlavní Nádraží, started, but the design was still based on an underground tram network. That’s why Hlavní Nádraží metro station on line C has a different layout than other metro stations: a double track with platforms on either side, whereas stations designed for the metro have a central entrance hall with a single track and a platform on each side. 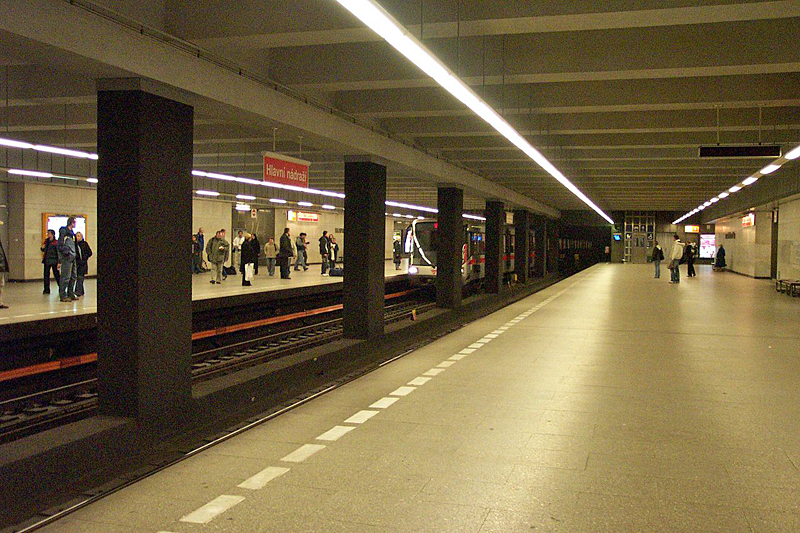 In 1967, it was decided to build a ‘real’ metro system and not underground tram lines. Such metro systems were also fashionable in the Soviet Union and the Communist Party of Czechoslovakia liked to follow this trend. Finally, construction started, but the entire project had to be changed from tram to metro.

The stations on line C were built by cut-and-cover construction. Excavation equipment made a large hole which was covered with a concrete deck. Once this was in place, life above ground could continue while construction work was being carried out. 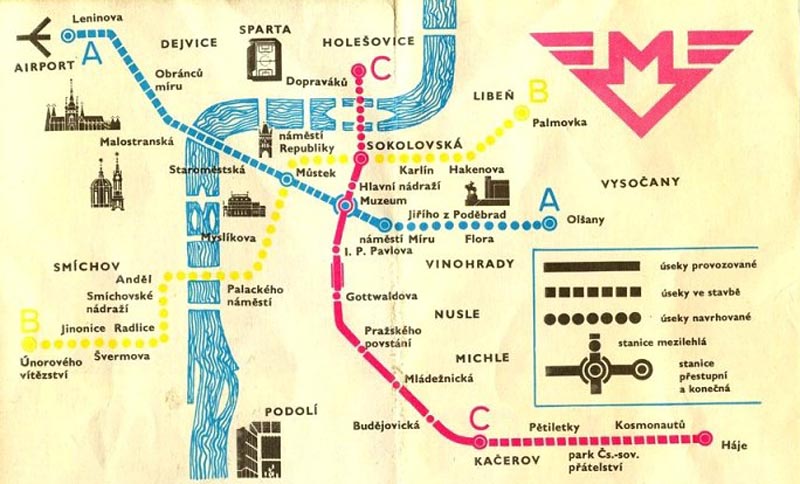 Construction of green line A

In 1978, the first section of line A opened with seven stations between Leninova (now Dejvická) and Náměstí míru with a transfer station at Muzeum. While all stations on Line C were built using the cut-and-cover method, line A used drilling technology. Line A is located deep underground so that the foundations of the houses would not be damaged. With a depth of 52 m, Náměstí míru is the deepest metro station in Prague and has the longest escalator in the network. More about fast-moving escalators.

The stations between Dejvická and Náměstí míru are identical in design, the walls are lined with a repetition of concave and convex shapes. Only the hue differs from station to station. The colours are not chosen randomly but reflect the place after which the stations are named.

* The gold of Hradčanská symbolizes Prague Castle.
* The green of Malostranská represents the surrounding royal gardens.
* The blood red of Staroměstská refers to the murders of the 27 Czech nobles during the Revolt of 1621.
* The brown of Muzeum stands for the fortified walls that once stood here.
* The blue of Náměstí Míru (Peace Square) is the colour of peace.
* The purple red of Flora refers to the vineyards of Vinohrady. 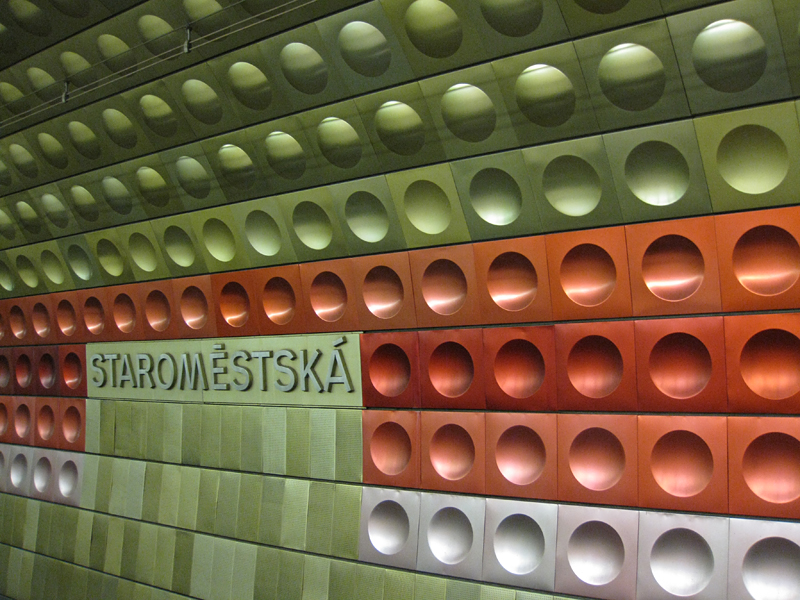 Nádraží Veleslavín is the transfer station for the airport bus. When the station was built in 2015, the city of Prague did not consider it necessary to build escalators to street-level. This was most inconvenient because many passengers were lugging heavy suitcases. The solution was: porters! Escalators were eventually installed in 2018, but they are 30% narrower than in other stations. Passing each other, especially with suitcases, is virtually impossible. 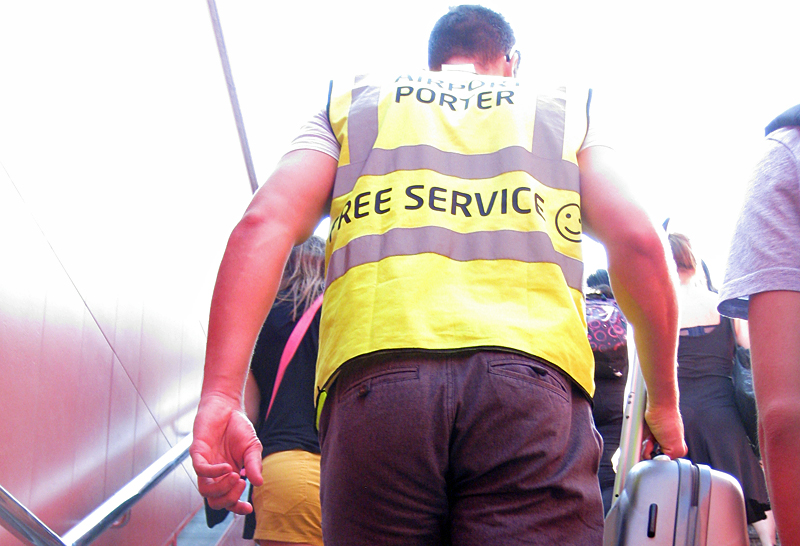 On ground level was the ČKD, Českomoravská Kolben-Daněk, heavy machinery factory, founded in 1896 by Emil Kolben, after whom the Kolbenova metro station is named. The factory was confiscated by the Nazis and later, nationalized by the communist regime. Here the red ČKD Tatra trams were made. After the Velvet Revolution in 1989, the factory was privatized. In 1992 the production of the trams stopped and in 2002 the factory went bankrupt.

Kolbenova and Hloubětín stations were designed to transport many workers to and from the factories but the workforce had been reduced. The stations did not open until the industrial area was revived.

Metro line D will be operational in 2029. The line will be 10.6 km long and incorporates two existing stations, Náměstí Míru and Pankrác, another eight new metro stations will be built. Line D is to be fully automatic and will run with unmanned trains. 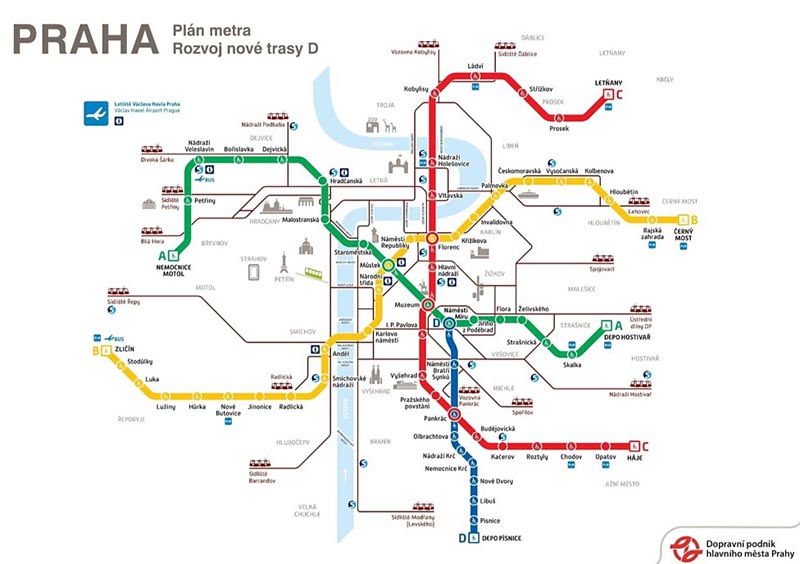 There are plans for a 36 km circular line with 23 stations, some of which already exist. This new line will go from Podbaba train station via Dejvice, Smichov, Budějovice, Vršovice, Zizkov, Vysočany, Čakovice and then back north to Podbaba. If approved, construction will start in 2033.

On 21 February 1990, fourteen metro stations changed their Soviet inspired names to general ones. The artworks in several stations recalling the Communist past have been preserved: a relief of Lenin in Dejvická, formerly Leninova, and a mural depicting the communist Russian space program in Háje, formerly Kosmonautů.

Until 1990, Anděl station was known as Moskevská (Moscow Station). In 1985, it was opened on the same day as the Prazhskaya (Prague) station of the Moscow Metro. Both stations contain works of art that seal the Soviet-Czechoslovak friendship. Anděl station, like the Smíchov train and metro station, contains some of the best-preserved examples of communist-era art still to be found in Prague. 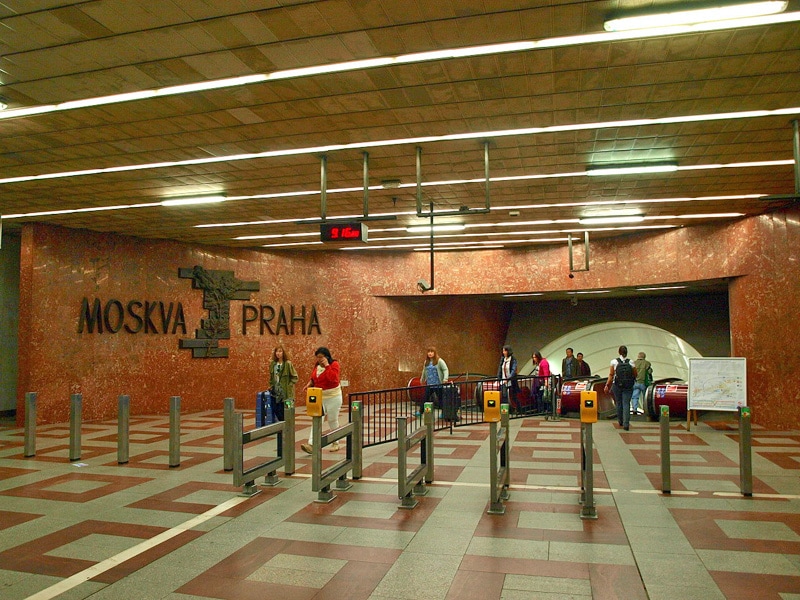 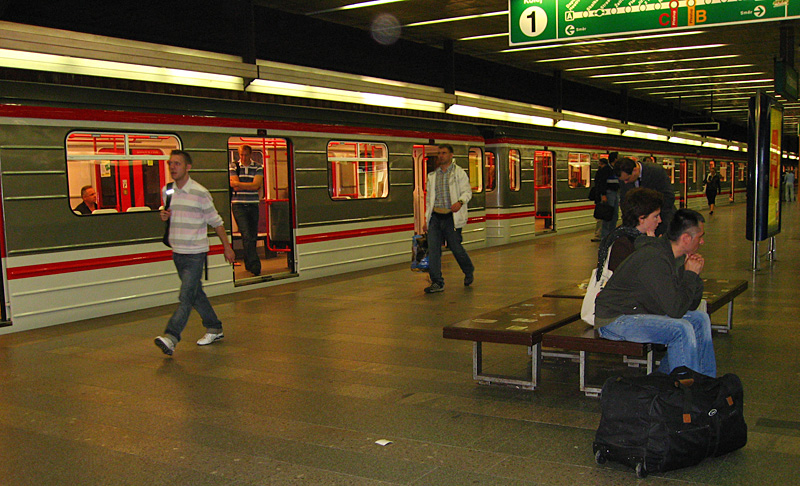 * With more than 620 million passengers per year (or 1.7 million people per day), the Prague metro is one of the busiest metro networks in Europe.

*In 1968, Tatra Smíchov, part of ČKD Praha Concern, won the tender for the supply of trains for the Prague metro. However, on 1 January, 1971 the order was cancelled and the choice now fell on obsolete and heavyweight Soviet trains.

* The construction of Line C was delayed and only opened in 1974 because the Soviet-built trains were too heavy for the Nusle Bridge (part of the track). The rails and the station are suspended under the bridge and they had to be reinforced. More about the Nusle Bridge https://prague-now.com/history/nusle-bridge-and-vysehrad-metro-communist-grandeur/

* A number of stations show small silver-coloured plaques indicating the height of the water level during the floods in August 2002. Nineteen stations were flooded. For months they remained closed, and transport was done by extra buses and trams. The worst effected stations were in the Karlín district, Křižíkova and Invalidovna. They did not reopen until March 2003.

* At night the trains are in one of the three train depots: Depo Kačerov, Depo Hostivař and Depo Zličín, where they are also maintained.

* Prague’s public transport company is Dopravní podnik hlavního města Prahy abbreviated to DPP. The company operates not only the metro but also trams, buses, ferries, Petřín funicular and the chairlift in the zoo. 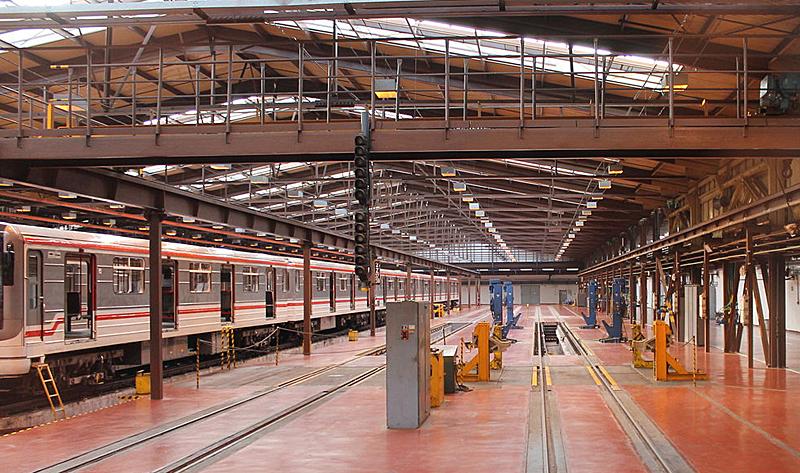