The revolution in the metro became official on 21 February 1990, when renaming thirteen Prague metro stations received formal approval. When in 1989 the communist regime fell, the Prague metro was only 15 years old. As it was a prestige project, the names of the stations reflected the communist doctrine and ideology. That’s why, after the Velvet Revolution in 1989, stations changed names. The majority of the renamed stations are on metro line C as this line was first-built and it was no more than logic that the stations had communist names. 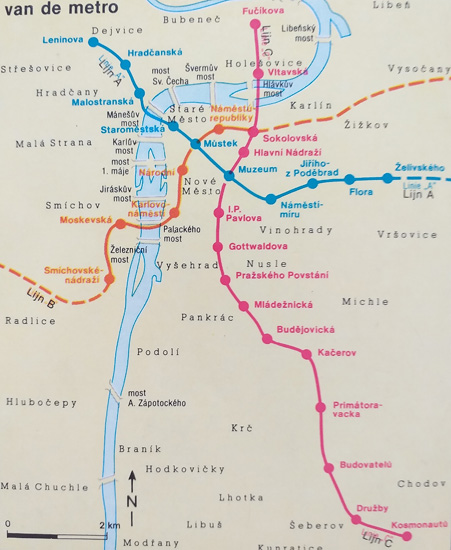 Imaging this: You take the metro to go to work on a  Wednesday morning in 1990 and you discover that many metro stations have changed names. The names of fourteen stations changed overnight. There was no discussion about them because everyone wanted to get rid of a hated regime. Most metro names changed without further comment. Other names such as Moskevska were open for debate whether or not they should be changed. Some remained, others were changed back again. 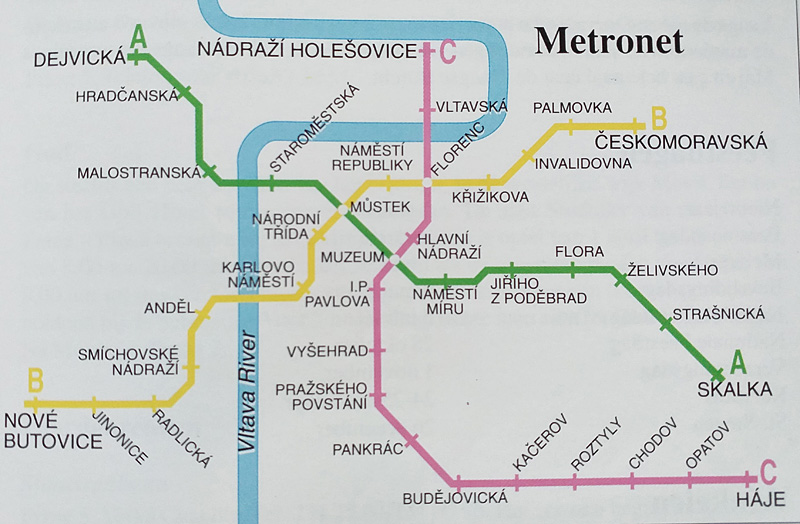 1. Leninova now Dejvicka metro station
The name of the metro station Leninova refers to Leninova Street (now Evropaska) which was named after Lenin. Vladimir Lenin was the founder and former president of the Soviet. In 1917, he seized power and deposed the Tsar. Russia now turned into a socialist republic and agricultural lands, companies and factories became state property. However, this led to a decline in production and he soon changed his policy. Part of the state property became private property again. He died in 1924, his successor, Stalin, believed in the same ideology.

2. Gottwaldova now Vyšehrad metro station
Gottwaldova metro station referred to the Klement Gottwald Bridge, which is now called Nuselský Bridge. Klement Gottwald was the leader of the communist party from 1945 to 1953. A seasoned Stalinist, he nationalized industry, introduced collective farming and forced Czechoslovakia into a Soviet and Stalinist model of government in which the Communist Party replaced the state. Political purges began in 1950, resulting in the executions of about 180 party officials, including the party’s chief secretary, Gottwald’s rival Rudolf Slánský. As a dignitary, Gottwald attended the funeral of Joseph Stalin on 9 March 1953. He caught a cold, contracted pneumonia and died five days later.

3. Fučíkova now Nádraží Holešovice metro station
Fučíkova metro station is named after Julius Fučík (1903 -1943), journalist and active member of the Czechoslovak Communist Party. When the Nazis occupied Czechoslovakia in 1939, he went into hiding and in 1941 became a member of the banned Central Committee of the Communist Party. In the same year, the Nazis arrested him and while imprisoned he wrote: Reportáž psaná na oprátce (Report Written under the Noose). In 1943, he was sentenced to death and hanged.

His book is full of hope for a better, communist future. Therefore, the Communist Party regarded it as suitable propaganda material and the book became compulsory reading for school children aged ten and over. Fučík became an ideological symbol of the Communist regime, but he also opposed the Gestapo, saved the lives of countless Czechoslovaks and denounced the horrific practices of the Gestapo in prisons. Julius Fučík , a man with two faces

5. Primatora Vacka now Roztyly metro station
Primatora Vacka (Mayor Vacek) was named after Václav Vacek (1877-1960), writer, politician and mayor of Prague. He was one of the founders of the Communist Party of Czechoslovakia in 1921.

1. Druzby (now Opatov) means friendship, companionship, but with a loaded meaning. These were chores that were obligatory during communism to fraternize with your comrades. The word družba evokes more associations. Young people had to work on farms as a social service, for example in the hop harvest, družba na chmeli. It is a word that Czechs shun these days because it invokes unpleasant associations.

4. Budovutelu (now Chodov), budovatel means builder, after 1948 it got the meaning of builder of socialism. 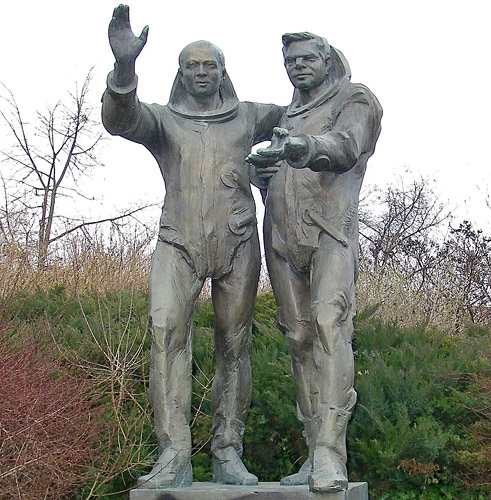 3. Dukelská now Nové Butovice was named after the Battle at the Dukla Pass in the Carpathians in September and October 1944, an offensive between Nazi Germany and the Soviet Union. The battle claimed the lives of a total of 300,000 soldiers, 17,000 of whom were Czechoslvaks.

4. Sokolovská now Florenc was named after the Battle of Sokolovo in Ukraine in March 1943. The Czecholovak army fought alongside the Red Army and slowed down the advance of the Nazis

Moskevská now called Anděl got its name from the fact that Soviet architects and engineers designed and built the Prague metro. To strengthen friendships, the Prague and Moscow metro networks both had a station named after Prague. The Prague station was renamed Anděl but Moscow kept the name of the station Пражская, Prazhskaya. When the statue of Soviet Marshal Ivan Konev at náměstí Interbrigády in Prague 6 was removed in April 2020, Moscow threatened to change the name of the Prazhskaya metro station which has not happened so far.

Konev played a role in liberating the city of Prague from Nazi forces at the end of World War II, but his involvement in the building of the Berlin Wall, the suppression of the Budapest uprising of and the Prague Spring of 1968 showed him in a different light: from liberator to executioner.

Anděl, the station’s present name, refers to Dům U Zlatého Anděla (the house with the golden angel) on Nádražní street (near the Novy Smichov shopping centre), a house dating back to the mid-nineteenth century. Its facade was decorated with an angel in a tattered cloak with a palm branch in his hand. In 1980, the entire block of houses was blown up because of the construction of the metro. The angel has been preserved and is now in the storage of the Museum of the City of Prague. In 1999, Zlatý Anděl, an eye-catching building made almost entirely of glass, replaced the blown-up Dům U Zlatého Anděla. 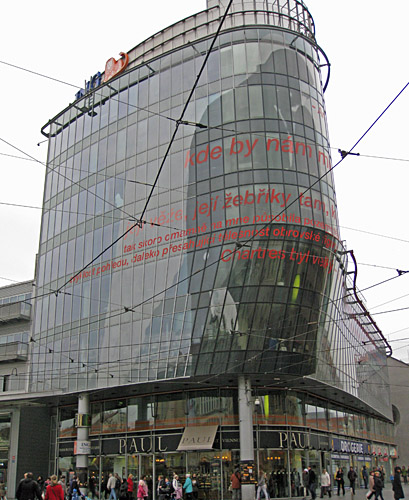 * Metrostion Hradčanská (line A) opened in 1978 and was to be named Obránců Míru, Defenders of Peace, but given a topographical name instead. Hrad means castle, which shows that this station is close to Prague Castle.

* Nové Butovice (Line B) opened in 1988 and should have been called Vítězného února (February Victorious) referring to the February Victory also known as Prague Coup in 1948 when the communists took power in Czechoslovakia. But due to the waning success of the regime, a less provocative name, Dukelská, was chosen.

* Invalidovna (line B) opened in 1990 and was to be Hakenova after Josef Haken, chairman of the Communist Party.

* Českomoravská (line B), opened in 1990 and as planned as Zápotockého, was named after Antonín Zápotocký successor to Klement Gottwald and president of Czechoslovakia from 1948 to 1957.

* Kobylisy (line C) was to be named Rudé Armády, the Red Army.

Prague: the City of Forgetting

The Czech writer Milan Kundera (1929), persona non grata in his native country since 1975, lives in France and always writes about Prague, a city he cannot forget and emphasizes Prague’s polymorphous and ever-changing identity. He called Prague ‘city of forgetting’. And that is exactly what happened to the communist legacy of metro stations and other communist reminders.

The name change of the metro stations erases the past and is also positive development. The communist names of the stations were intended to honour communism, not to clearly indicate the location of these metro station. The new names have changed this.
The name Staroměstská clearly shows that this metro station is in the Old Town, Stare Mesto. But Fučíkova tells nothing about the location yet the post-communist name nádraží Holešovice, train station Holešovice, is a clear indication. Švermova could be anywhere in Prague. The current name Jinonice shows in which district it is located.

Erasing the communist names was done not only because of sentimental reasons, it was also practical.