Slav Epic by Alfons Mucha: Where to See?

The Slav Epic by Alfons Mucha is a cycle of twenty impressive paintings depicting the history of the Slav people and civilization. He found inspiration for this work in Slavonic mythology and the history of the Czech people. The largest canvas is more than six by eight meters (20 x 26 ft). Mucha (1860-1939) is especially famous for his illustrations for posters and magazines in Art Nouveau style. Yet. his passion was elsewhere: the Slav Epic to which creation he devoted almost twenty years. At the moment. there is a legal battle going on where the paintings should be permanently exhibited. Both Prague and Moravský Krumlov, a town in South Moravia claim that Mucha’s artwork belongs to them. 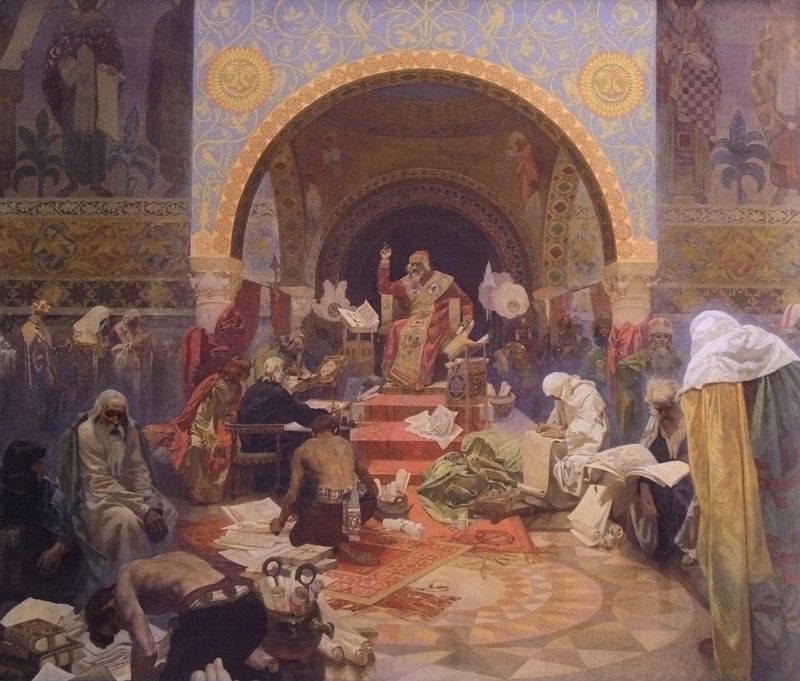 The Epic and Nationalism

At the end of the nineteenth century, the Austro-Hungarian government asked Mucha to make a design for the Bosnia-Herzegovina pavilion at the 1900 Paris Exhibition. To prepare this assignment, Mucha traveled through the Balkans and studied the history of the Slavonic people. This inspired him to paint the Slav epic.

It is no more than logical that Mucha should find inspiration in his own history. He was born in Moravia part of the Habsburg Monarchy, which was crumbling under the pressure of the rising nationalism of different ethnic groups. The year before Mucha’s birth, nationalist ambitions were fed by the defeat of the Austrian army in Lombardy, followed by the unification of Italy. During the first ten years of Mucha’s life, Czech nationalism was on the rise and was reflected in the musical poems of Bedrich Smetana entitled Má Vlast (my home country) and also in the opera Dalibor, whose hero dies in the attempt to defy feudalism to strike a blow for national independence.

The twenty paintings were first exhibited in the Klemetinum in Prague in 1919. In 1933 the canvases were stored in the depository and in World War II they were hidden under a heap of coal. From 1963 to 2011, they found a home in the castle of Moravsky Krumlov. This was not the ideal place for a valuable work of art. The roof was leaking, the walls were damp and the castle was in dire need of a makeover. In 2012, the twenty paintings moved to Prague where it was exhibited in the Museum of Contemporary Art in the Veletrizni Palace. In 2018, it moved to the Municipal House in Prague until January 2019. Since then there have been plans to return the paintings to the now restored castle in Moravsky Krumlov.

Slav Epic Permanent in Prague or in Moravsky Krumlov?

Charles Crane, Mucha’s American patron, played an important role in the creation of the paintings. The American offered him $100,000 to actually paint the epic. When the canvases were finished, they were handed over to the City of Prague.

There is currently a legal battle going on between Prague and Moravsky Krumlov, both claiming the twenty paintings. Mucha donated the cycle to the city of Prague on the condition that a special pavilion would be built (so far not realized). Moravsky Krumlov claims the work because it has been exhibited in this town for the past 40 years. The essence of the legal dispute is: what were the conditions for the gift and were these drawn up by Crane or by Mucha?

As from July 2020 the Slav epic can be seen in the castle of Moravsky Krumlov and will remain there for at least five years. The paintings will return to Prague only when the city has found a suitable place to exhibit them. 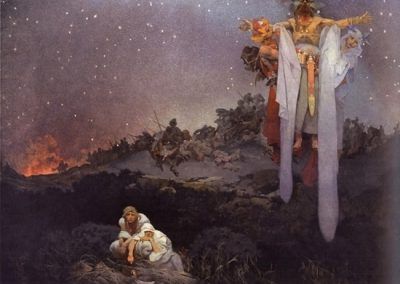 The Slavs in their original homeland 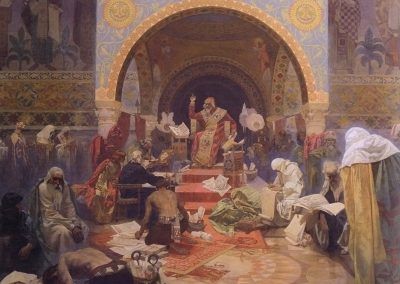 Tsar Simeon I of Bulgaria 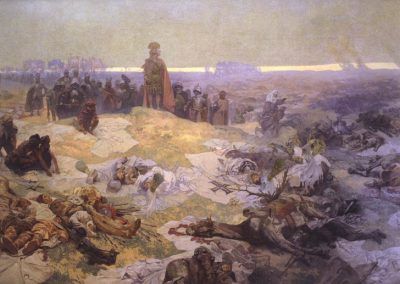 After the Battle of Grunewald 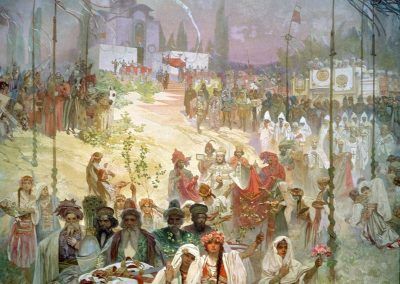 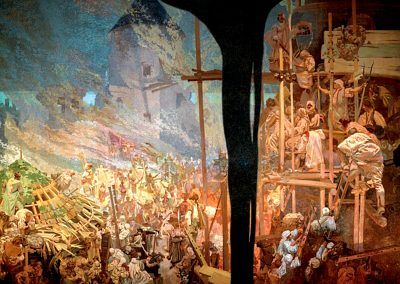 The Defence of Sziget by Nikola Zrinski 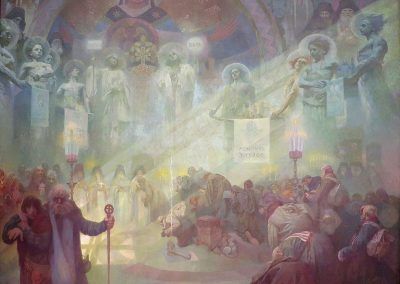