Stalin Monument Blown Up but Not Forgotten

The Stalin Monument stood on a huge pedestal on the edge of Letna Park in Prague until 1962. Today, a gigantic metronome stands in its place. On 1 May, 1955, the communist regime revealed a group statue with Jozef Stalin as the shining centre. Six hundred workers spent two years working on this 15.5 m tall statue of Stalin. A never-used bomb shelter in the plinth was part of the monument. Stalin never saw the finished product. The inauguration was two years after his death. When Nikita Khrushchev, accused Stalin of mass murder, the Monument in Prague had become a disgrace for the Communist party. Stalin was seen as a ruthless dictator whoexecuted anyone who disputed his leadership. The Monument was blown up with 800 kilos of explosives and it took two month to clear away the rubble from Letna Hill. 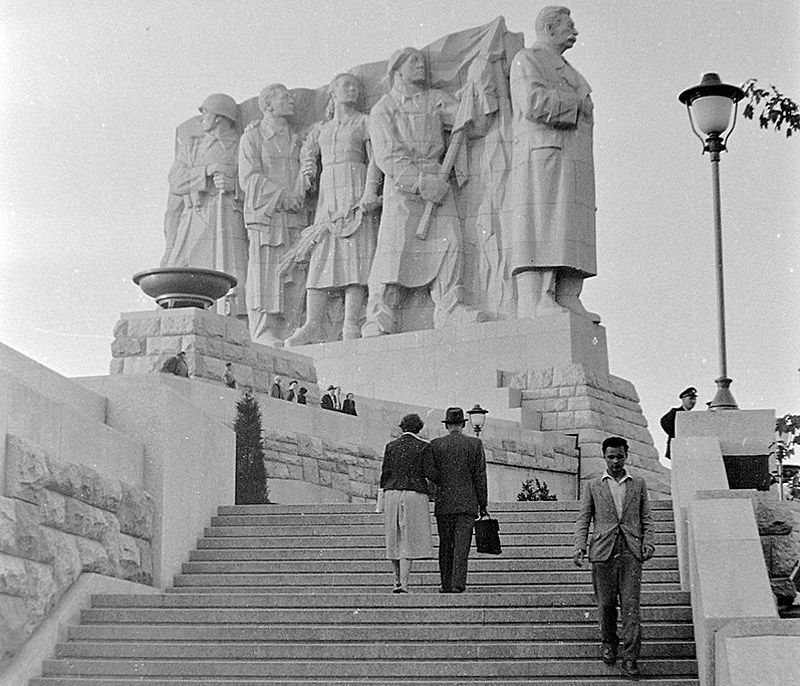 In 1949, shortly after the invasion of the Red Army, the Czechoslovak Communist Party decided to erect a monument in honour of Joseph Stalin. He was the communist dictator of the Soviet Union and popular after World War II for defeating the Nazis but there was also a downside to his fame. Everyone who threatened his position of power was eliminated. A competition was organized and all visual artists in Prague were obliged to participate. Otakar Svec won the competition and the construction of the monument started in 1953. In Svec’s design, Stalin has a book in one hand and holds his other hand to his heart. He stands in the front and behind him are socialist archetypes: a worker, a farmer, a female party member and a soldiers. This design was chosen because Stalin was not portrayed with an arm raised forward and clenched fist as was usual in socialist realist art. 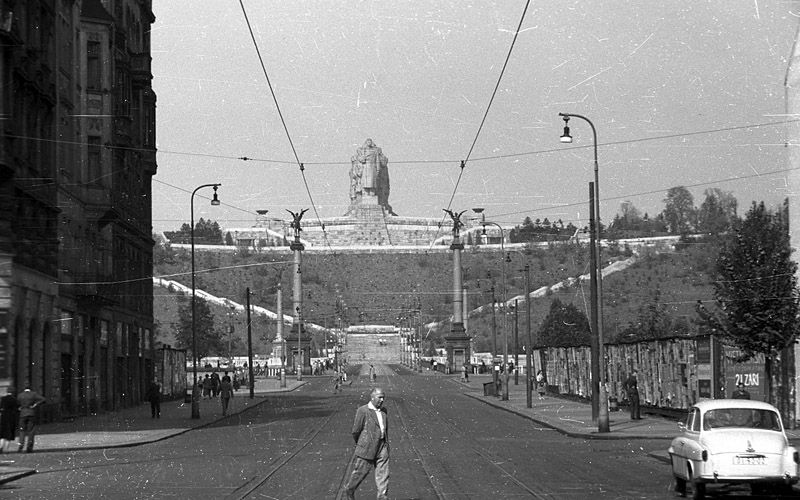 Construction of the Monument

Construction started in February 1952, and took two years to complete. First, Letna Hill had to be leveled to create a flat surface. The monument’s skeleton was made of reinforced concrete. Thirty thousand granite slabs were hoisted with a giant crane and attached to the skeleton. Then the artistic work could begin. Six hundred people, both artists and labourers, worked on the monument which was 15.5 meters high, 22 meters long and weighed 17 million kilos. It was so large that details such as the hammer and sickle button on Stalin’s coat measuring half a meter were clearly visible. 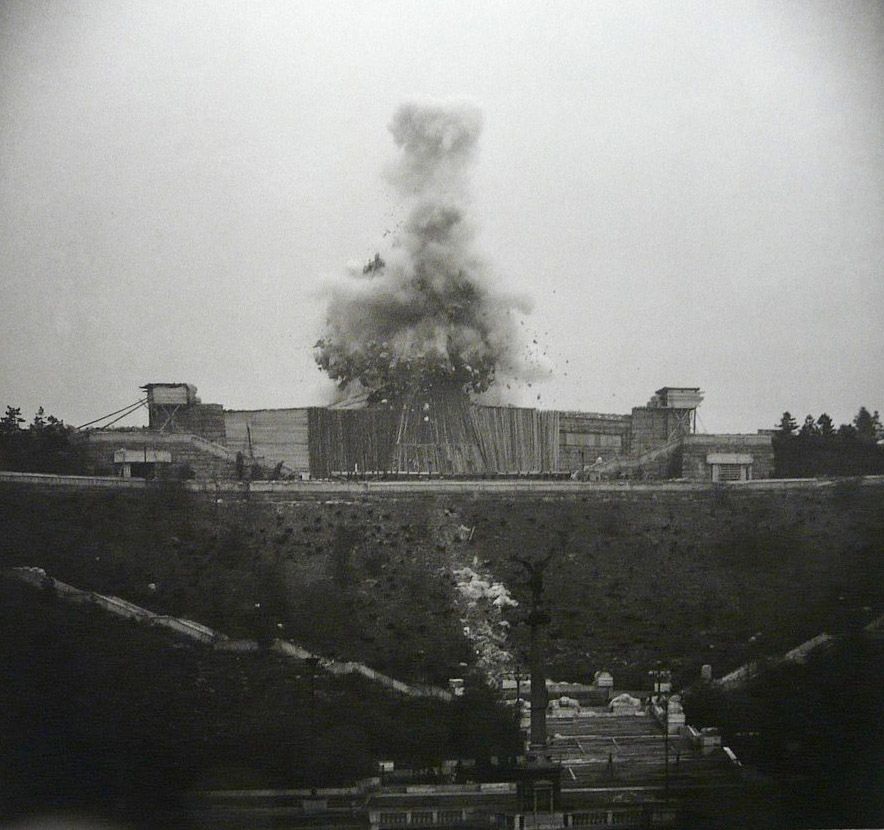 The Destruction of the Stalin Monument

The monument was unveiled on 1 May, 1955, two years after Stalin’s death. It was a bold demonstration of loyalty to Moscow. The new Soviet leader Nikita Khrushchev was conspicuously absent at the ceremony, but this hint was not immediately recognized. During the twentieth party congress in 1956, Khrushchev accused his predecessor of mass murder. Stalin fell into disgrace for abuse of power and the statue became an eyesore to the Czechoslovak communist party. The monument was also embarrassing for Moscow and it was decided that it had to be removed. In 1962, the Stalin Monument was blown up with 800 kilos of explosives. Only the plinth remained where the metronome has been nodding back and forth since 1991. Next to the metronome are two large bowls, remnants of the Stalin monument, which give an impression of the huge size of the monument. 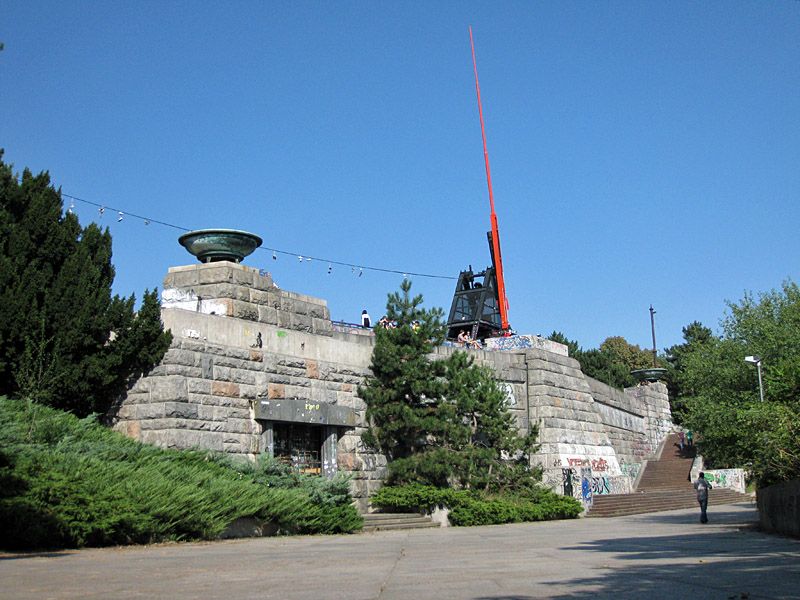 Stalin out of Favour

When Stalin fell out of favour, his name had to disappear from the Prague street scene. Changing a street name was easy; Stalinova became Vinohradska. From one day to the next the street had a different name. The huge Stalin Monument on Letna Hill posed a bigger problem. The Communist party issued an ordinance that nothing should be recorded during the dismantling of the monument. Photography and filming were prohibited.

Stalin Monument Blown up but not Forgotten

The monument had to disappear without ado. Life would continue as if the statue had never existed. But Jozef Klimes, one of the sculptors who had worked on the statue, ignored the prohibition. Armed with his camera, he went to Letna Hill. The monument was surrounded by barbed wire and guarded on all sides by the police. He hid behind some nearby trees and documented the monument’s destruction with hundreds of pounds of explosives. It took two months to remove all the debris. The photos of Klimes are all that is left of this huge monument. 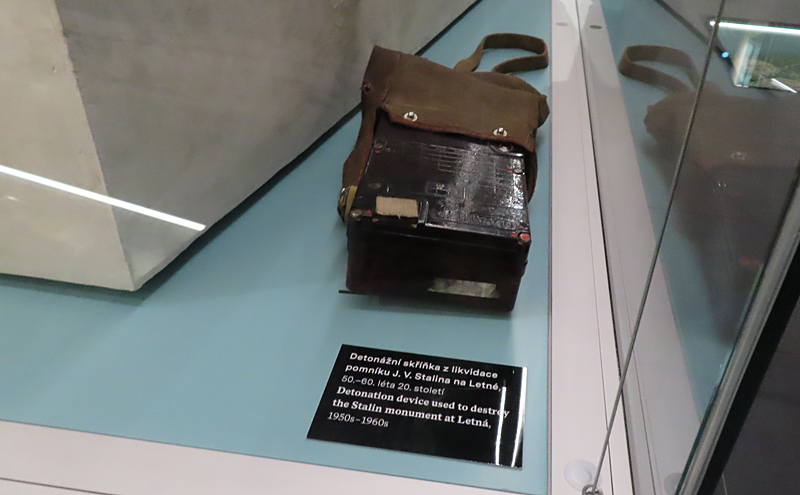 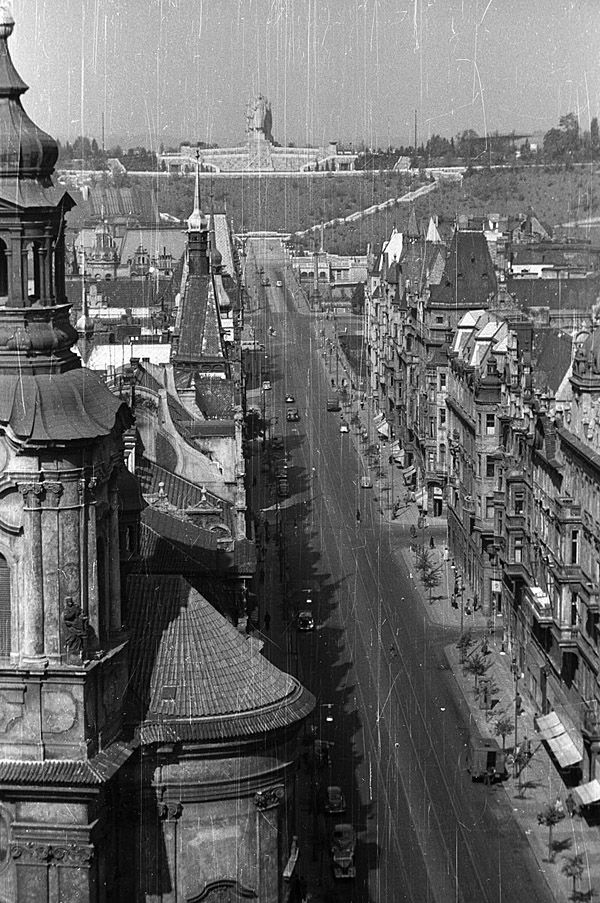