Stalinist architecture in Prague at its best: Hotel International. At 88-metre tall, it is the largest Stalinist style building in Prague and the crème de la crème of Socialist Realist architecture. Crowned by a giant star, set in ruby-red glass, its communist origin cannot be denied. This 16-story sky scrapper is reminiscent of similar buildings in Moscow and Warsaw. If you cannot stay in the hotel, go there for a coffee in the lobby. The public areas are impressive, complete with some original furniture and socialist-style murals and tapestry.

The hotel was built between 1952 and 1954, has sixteen floors and part of the building was a fall-out shelter for six hundred people. The striking characteristic is the large central tower flanked by two symmetrical wings. Above the main entrance sculptures of Russian war heroes greeted by Czech peasants. Inside, the entrance hall is majestic: sweeping staircase, painted ceiling and marble columns. The lobby, reception area and main staircase are all in the original state. The furniture is a mixture of Cubist and Art Deco styles. The furnishing is a combination of original and more modern pieces.

Eye catchers are tapestries, stained glass, mosaics, chandeliers, wrought iron and hammered copper banisters. Some walls of the hotel are painted with plant motifs. The showpieces are the mural painting in Socialist-Realist style, opposite the grand staircase and the large tapestry in the lobby. The tapestry is called: Praga Regina Musicae and depicts an aerial view of Prague. It shows Stalinist landmarks that no longer exist today: the Stalin Monument on Letna Hill and the Monument to Soviet Tank Crews at Stefanik Square. 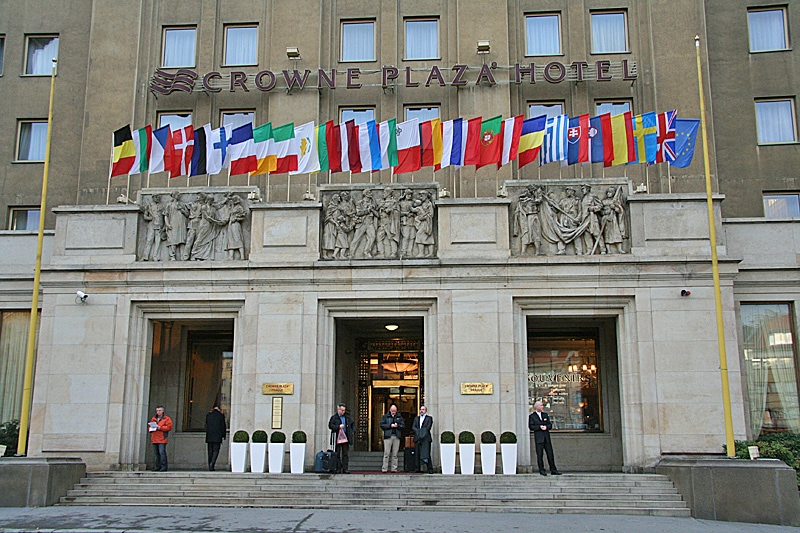 The ruling communist party and the military leaders were closely connected with the construction of the hotel which is truly a building on a large scale. No other building in the country came close to it. Originally, it would serve as a private luxury hotel for prominent military officers and party advisors. However, it appeared that neither the army nor the Communist Party needed so much accommodation space. Therefore, it was decided that it would become an ‘ordinary’ but luxury hotel.

The red star shone like a beacon atop the building. For practical purposes this five-pointed star, mounted on a spike, could be lowered so that it could be cleaned. This was done at night so that the star would always sparkle. When the Holiday Inn Group took over the hotel after the Velvet Revolution, the management did not want a red star: symbol of communism. Therefore, it was painted green, to match the corporate identity of the hotel chain. In 2007, the star was painted gold and has adorned the building ever since.

From Druzba via Crowne Plaza to Hotel International

When the hotel opened in 1957, it was the largest hotel in Czechoslovakia. Its name was Hotel Druzba, Czech and Russian for ‘friendship’. The hotel was the brainchild of the Czechoslovakian Minister of Defense who saw the building as a means to reinforce ties between the newly-formed Fourth Czechoslovak Republic and the Soviet Union.

Its name, Druzba, was short-lived and changed to Hotel Cedok, a Czechoslovak travel agency. This name did not last long either as later the same year a public competition was held and the name ‘Hotel International’ was chosen. After the Velvet Revolution in 1989, the hotel became part the Holiday Inn Chain. In 2007, it changed hands again and became part of the Crowne Plaza chain. Since 2015, it has been part of the Mozart Hotel Group and changed its name back to Hotel International. 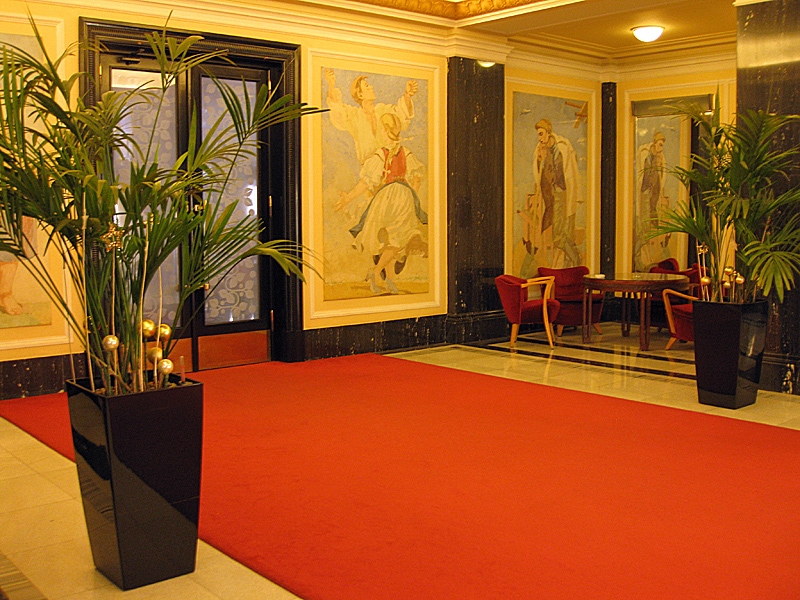 When you see Hotel International for the first time it gives you a feeling of déjà vu. The building is reminiscent of buildings constructed in the 1920s and 1930s the USA. It is also very similar to the Palace of Culture in Warsaw. If you have visited Moscow, you will notice its resemblance with Moscow University.

Stay the Night in Hotel International

And finally, you can also stay the night in Hotel International. This four-star hotel has 278 guest rooms with free tea and coffee making facilities. The hotel has a private garden restaurant with a children’s playground where guests and visitors can enjoy a tasty breakfast or BBQ in the evening. The hotel is a fifteen-minute drive from Vaclav Havel Airport. Prague Castle is five minutes by tram that stops in front of the hotel. The hotel is located in Dejvice, a residential neighbourhood.
Address: Hotel International Praha, Koulova 15, Dejvice 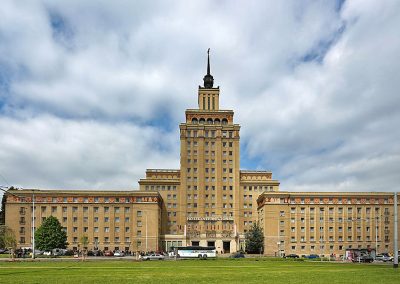 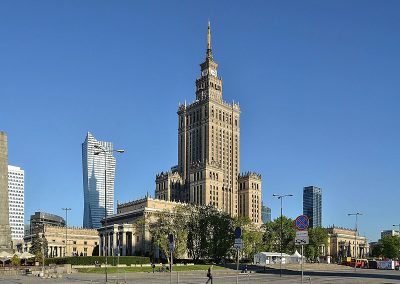 Palace of Culture in Warsaw 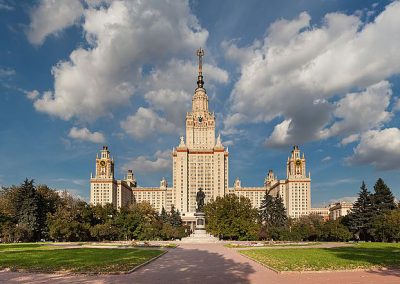 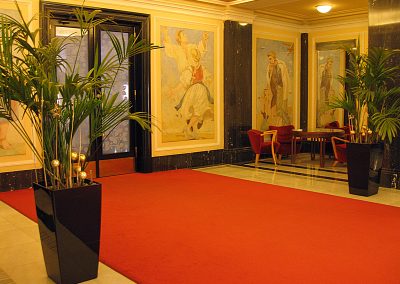 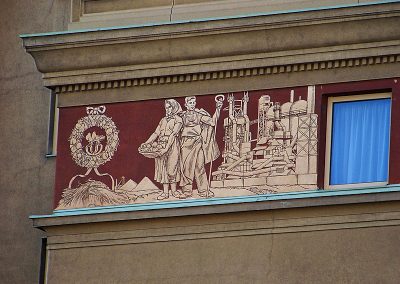 Sgraffito on the facade 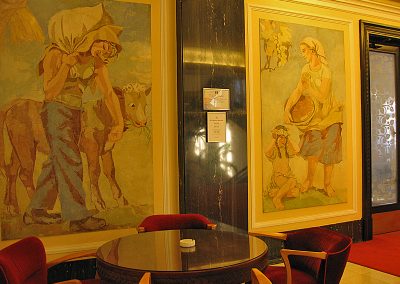 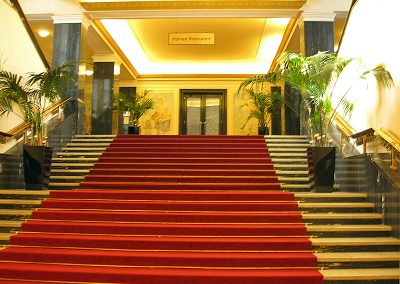 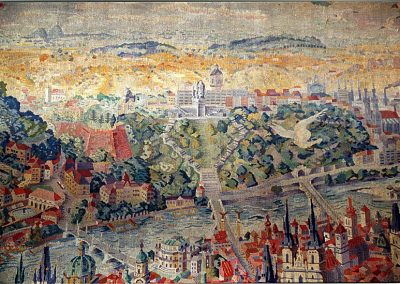 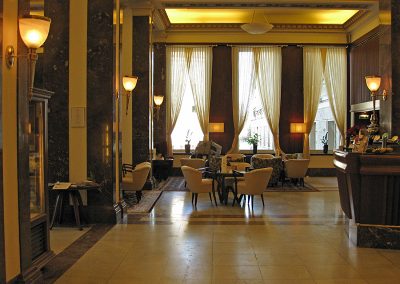