Art gallery Magical Cavern on Petřín Hill in Prague, seems to have stepped out of a wizard world. This cave is in Argondia, an imaginary realm named after the artist-owner Reon Argondian, his real name is Jan Zahradnik. Some 80 paintings are on display in this mill, which has been converted into a grotto. Original sculptures and lots of plaster and paint resulted in a magical cave. The outer walls overgrown with ivy strengthen the mystery. The Magical Cavern is an art gallery and at the same time a work of art in itself. 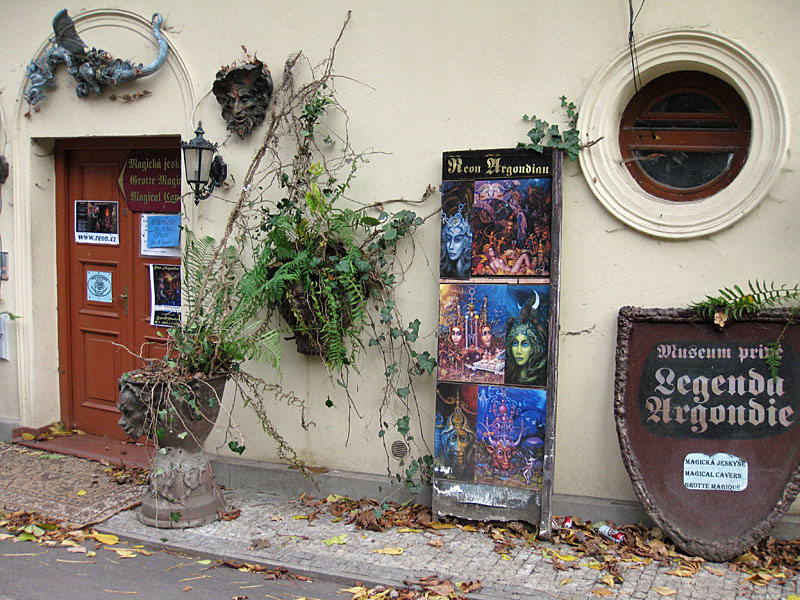 Magic Cavern art gallery is where Reon Argondian exhibits his colourful paintings. Myths and legends are central to his works and so he creates an imaginary kingdom on canvas (and a tangible one in his studio house). Many of his paintings focus on strange creatures, plants with human faces that come to life and lush vegetation surrounded by rays of light.
His paintings consist of different layers of oil paint on a wooden surface. Since each layer must have completely dried before applying the next one, it takes about a year to complete a work.

Magical World and the Kingdom of Argondia

The interior of the magical cavern art gallery resembles a cave tunneling system and every centimeter has been used for art. It seems as if you have stepped into a colourful magical world. Female figures almost jump out of the canvasses columns with fake Roman busts of sea unicorns and caryatids carry the beams.

Every nook and cranny in the Magical Cavern reflects the artist’s personal vision. His kingdom is named Argondia, and he, the artist, is the king. When you walk through the kingdom, you get the feeling that you stroll through someone’s personal fantasy.

In a number of rooms there are chairs and sofas so that you can view the works of art in a very relaxed way. The museum also offers free alcoholic and non-alcoholic drinks.

Who is Reon Argondian?

He was born in Prague in 1948 as Jan Zahradník. His wish to go to art school was not honoured by the communist regime and he was apprenticed as a potter in Italy. Later, when in Switzerland he was apprenticed to an art restorer who teaches him the old techniques and he works on the restoration of St Christopher by Hieronymus Bosch. After the fall of communism in 1989, he returned to Prague

Getting to Art Gallery Magical Cavern

Take tram 12, 20, 22 to Újezd stop, take the funicular to the first stop Nebozízek
Walk to the restaurant Nebozizek, continue south and keep to the left until you reach the Magical Cavern.