Loreta (or Loreto) is an imposing Baroque monastery and a place of pilgrimage in Prague. This cream-colored building with a green spire is a religious place of pilgrimage and was built during the seventeenth century. Loreta’s main treasures are the Santa Casa, the Holy House, with a statue of the Virgin Mary and religious objects including a diamond monstrance. Loreta consists of cloisters, the Church of the Nativity of our Lord and the Santa Casa or Holy House

A thirteenth-century legend has it that angels transported the home of the Holy Family in Nazareth to Loreta in Italy to safeguard it against pagans. A cult sprung up around this legend and the Holy House in Prague is one of the many that are dotted all over Eastern Europe.

Mary’s House, Santa Casa or the holy house, stands in the courtyard and is the centerpiece of the Loreta complex. The outer walls are decorated with Renaissance reliefs. The interior is bare and follows the Italian example. Treasures include a silver altar, a cedar wooden statue of the Virgin; a slender crowned figure wearing a long cloak, the infant Jesus in her arms. Faded frescoes adorn the walls, depicting scenes from the life of Mary. The Nativity of Our Lord Church behind the Santa Casa is an imposing Baroque church with an opulent Rococo interior. The church houses an ancient organ, cherub sculptures and frescoes depicting the Nativity and the Magi. 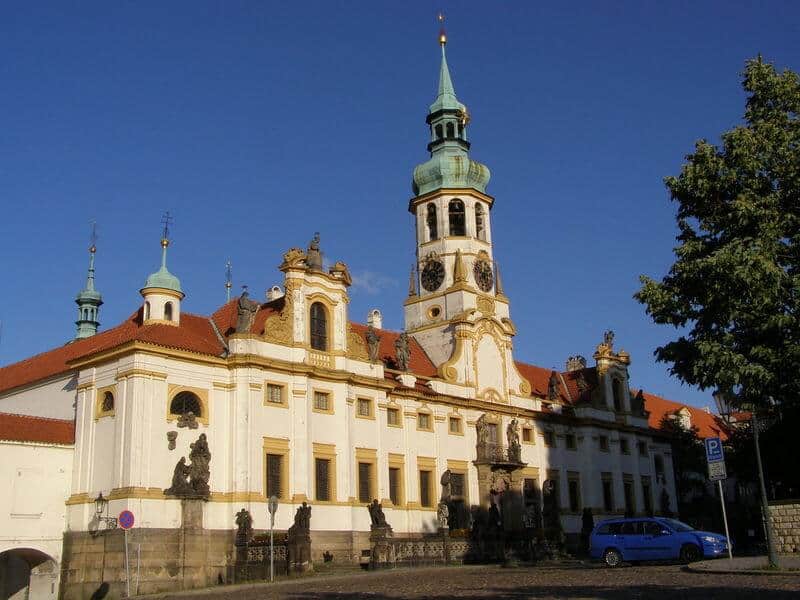 Paintings of Saints in the Cloisters

The cloisters are adorned with paintings of saints alternated with confessionals. The paintings are protected by glass which reflects the light and are therefore a bit difficult to see. Be sure to stop in front of an icon depicting Christ the Saviour. It is venerated as ‘acheiropoieton’, a picture not painted by human hands. Legend has it that Luke the Evangelist started painting this picture and angels completed it. The painting you see is a copy made in the seventeenth century for the Augustinian Church in Prague but modelled on a sixth-century icon which was covered in silver (like Greek icons) in the twelfth century and then disappeared. Many copies of the original icon found their way all over Eastern Europe. The painting in of Christ the Saviour at Loreta is one of them.

Twenty-seven bells make up the carillion cast in Amsterdam. Every hour sounds a hymn praising the Virgin. The first time the sound of the bells reverberated across Prague was on 15th August 1695, the assumption of Mary.

The Crypt of Loreta

The frescoes in the crypt of the Nativity Church were only discovered in 2011. Visitors cannot descend to see these works of art but they are projected in 3D in the last room of the cloisters. According to the description in the archives, researchers expected to find frescoes depicting the suffering of Christ. However, the description in the archives was of the frescoes in the crypt of the monastery in Chrudim, a town near the city of Pardubice, east of Prague. The frescoes in Loreta depict death and resurrection. 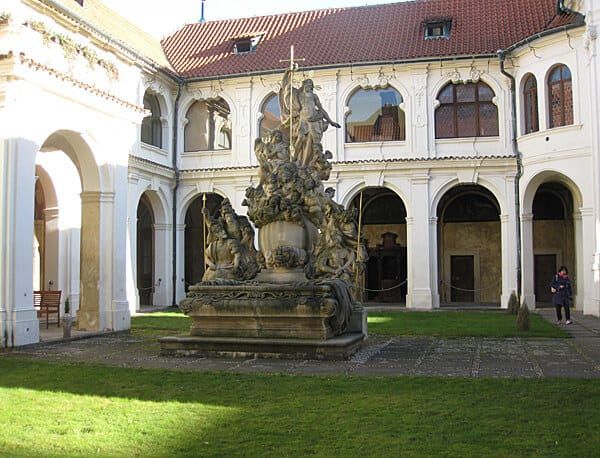 The Frescoes of Loreta

The crypt was the last resting place for the benefactors of Loreta. The frescoes were made in 1664 and inspired by Flemish and Dutch engravings. One of the frescoes, ‘The Raising of Lazarus’ shows how the Dutch painter Rembrandt influenced artists from Bohemia. In Rembrandt’s work Christ is a monumental figure who dominates the painting whereas in the Loreta fresco Christ is the same size as the other people who behold the miracle. Yet, the similarity with the work of Rembrandt is striking.

‘The allegory of the birth of Prince William of Brandeburg’, another fresco, has its origins in an engraving by Cornelis van Dalen who in his turn was inspired by Govert Flinck, both Dutch painters and engravers. The name of the artist is not known but alleged to be Cosmas of Austria, a Capuchin monk, apprentice of the painter Tobias Pock from Vienna.

Loreta treasures include liturgical objects, miters, chasubles, crucifixes and monstrances. The pearl monstrance is decorated with rubies, pearls and diamonds, the ring monstrance is inlaid with diamonds, rubies, pearls, emeralds and sapphires. The jewel of the collection is a monstrance beset with 6,500 sparkling diamonds and known as the Prague Sun. 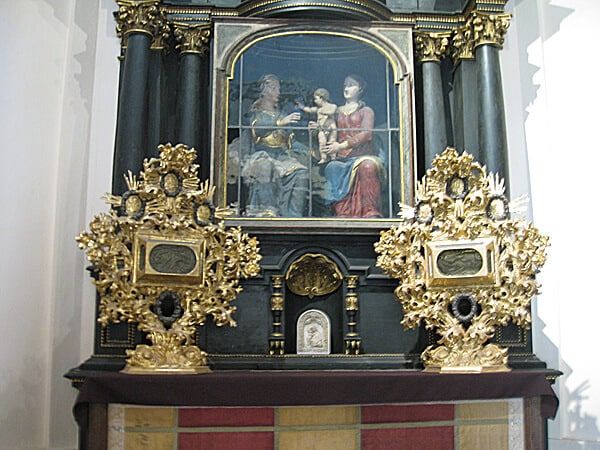 Every Saturday at 7.30 am Holy Mass is concelebrated in the Santa Casa, and at 6 pm in the Nativity Church, the main church of the Loreta complex. The faithful can go to confession before the celebration of Holy Mass.

On Christmas Day, Holy Masses are at 10 am, 6 pm and on 1 January at 6 pm (Check www.loreta.cz because times may vary)

On Christmas Day, entrance to Loreta is free for both tourists and pilgrims.

Tip from the editor of Prague-Now: When you visit Loreta in winter, put on a warm coat because almost the entire tour takes place in the cloisters which are half open. The church, the holy house and the treasure house are not heated.