Museum of Tower Blocks in Kladno close to Prague

Museum of Tower Blocks, Muzeum Věžáků, is located in one of the high-rise buildings of a housing estate in the industrial town of Kladno, 30 kilometers North-West of Prague. The estate was built to accommodate miners’ families. You can take a look inside one of the apartments which is fully furnished in 1950s style. You will also learn more about the architect Josef Havlíček, who promoted avant-garde trends in the Czechoslovak interwar architecture. 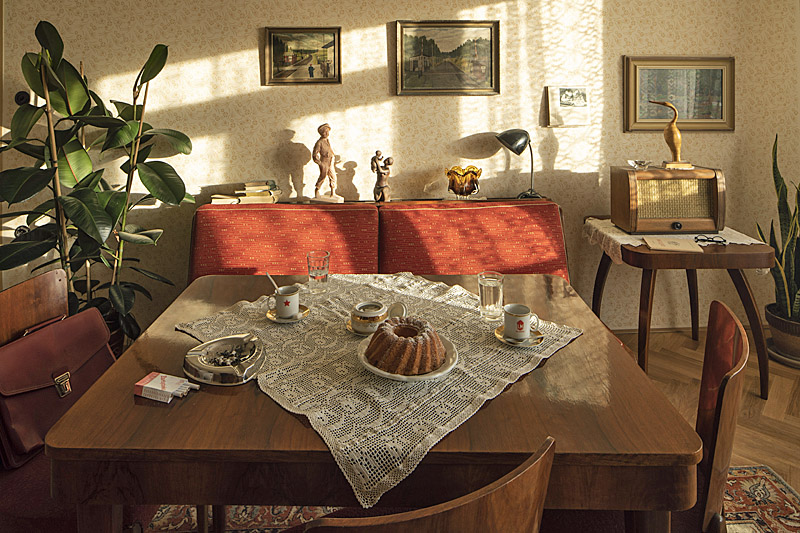 The museum apartment looks as if the family is still living there. When they moved in all they had to bring were beds, a kitchen table and a sofa as the apartment had a tailor-made kitchen and built-in furniture, which included wardrobes and storage space. The museum apartment was completed in 1956 and of the A-type, quite luxurious, and offered a high standard of living. There was a living room, bedroom, dressing room, bathroom, and hall. All rooms had their own windows so the apartment was filled with daylight. In sunny weather the view from the windows was and still is spectacular.

The entrance hall looks attractive. The eye-catcher is the bright red sofa. Some three hundred tenants lived in each residential tower, so there was quite a bit of coming and going. That is why three caretakers supervised the hall 24 hours a day. They kept an eye on the people who walked through the building and also cleaned the common areas, which also included a pram and bicycle storage room. The last two are still used by the current residents.

There is also a large air-raid shelter that is part of the museum tour. In 1965, the City of Prague became the owner of the property. The caretakers disappeared and with them part of the furniture. The leatherette sofa was recovered as well as the robust wooden tables. The original lamp, designed by Josef Havlíček, disappeared and the lamp that you now see is a replica. 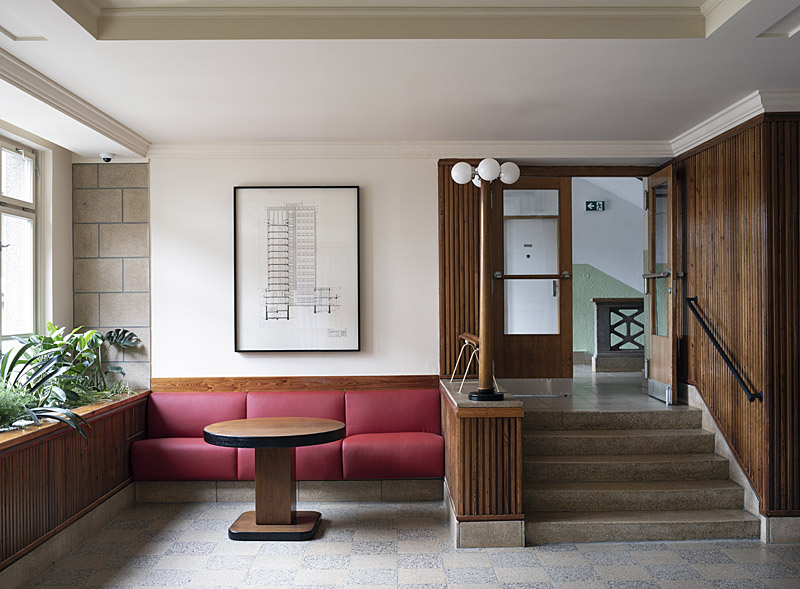 The A-type apartments Josef Havlíček designed were large. Living space for a family with children is in these tower blocks is 61.7 square metres whereas the standard was 45 to 48 square metres. One of the most innovative features in these high-rises was the communal laundry facilities in the basements. There were wooden frames for hanging clothes that fitted in a brick chamber which was heated: the forerunner of the tumble dryer.

Josef Havlíček designed a functionalist lay-out for the buildings which were surrounded greenery. His design did not bear any resemblance to the enclosed tower blocks typical of the state-mandated socialistic-realistic architectural style.

The tower blocks are interconnected and form the letter T. The skeleton frame is made of reinforced concrete and filled with brick walls. The facades are covered with brown ceramic tiles. 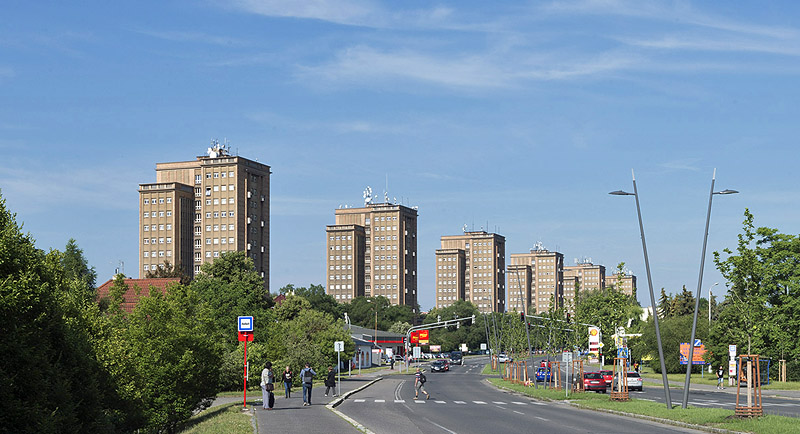 The town of Kladno is a centre of mining and steel industry. In the early 1950s, the architect Josef Havlíček designed the housing estate with six tower blocks of 13-storeys. Its original name was ‘Victorious February’ which referred to the Communist coup in 1948. One apartment is open as a museum.

The reliefs on the medallions on each house depict various animals and not happy farmers bringing in the harvest. The reliefs do not reflect the ideology of Socialist Realism which was visible everywhere in those days.
The housing estate’s name is no longer ‘Victorious February’, is now named after the architect Josef Havlíček.

The museum is open every Saturday and Sunday and only by prior online reservation or write (in English) to: info@muzeumvezaku.cz

Guided tours are in small groups with max of 9 people. Handouts in German or English are provided to non-Czech speaking visitors.

Getting to Kladno and the Museum of Tower Blocks

Kladno is about 30 km north-west of Prague and is reached by train or bus. Journey time for both bus and train is about one hour.
By train: from Prague Masaryko to Kladno train station. Multiple operators service this route
By bus: from metro station Nadrazi Veleslavin, bus 330 or 322 frequency every 20 mimutes 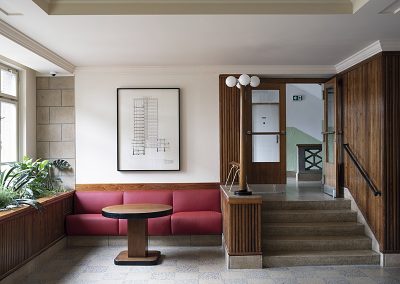 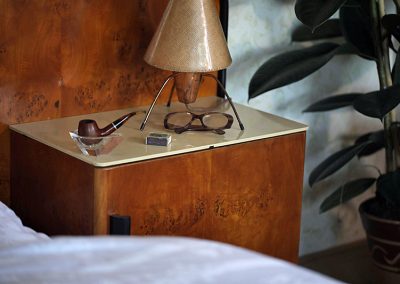 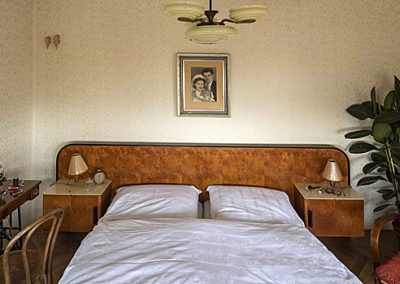 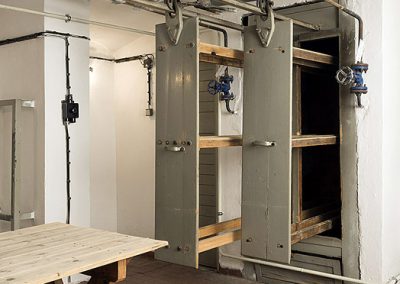 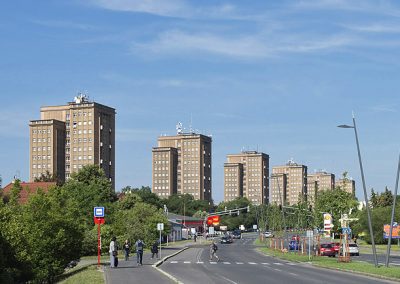 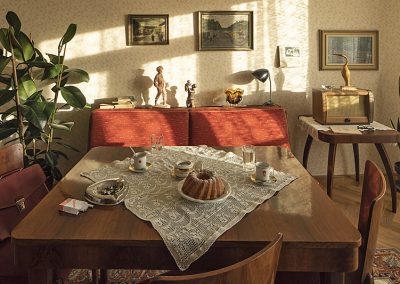 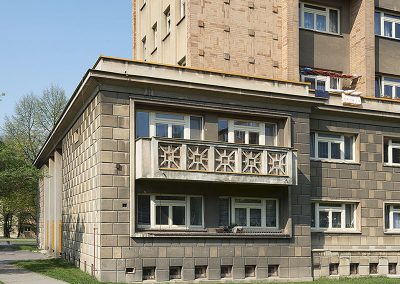 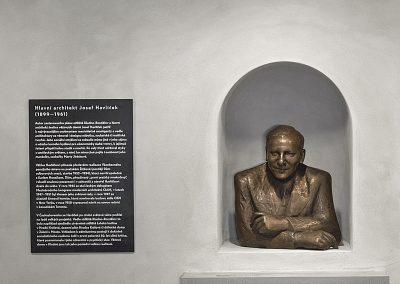 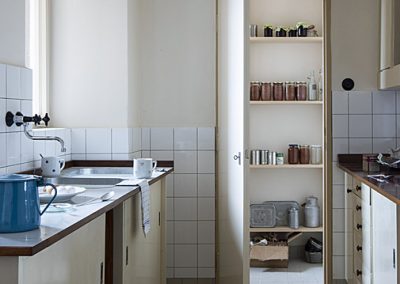 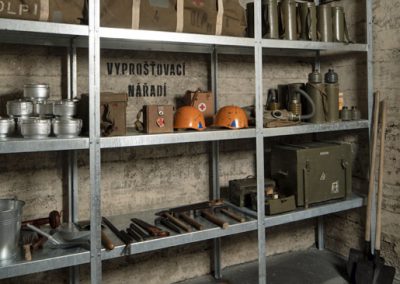 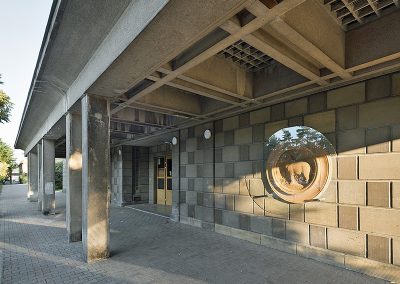 Main entrance to the tower block