Strahov library is famous for the Philosophical and Theological Halls lined with floor-to-ceiling bookcases brimming with theological books and bibles. Equally fascinating are the painted ceilings depicting Moses and the Stone Tablets and Saint Paul the Apostle preaching in Athens attended by a flock of Bohemian saints and church fathers. Seventeenth-century frescoes on the walls show how studying God’s word leads to wisdom. Priceless seventeenth-century globes are the centre-piece in the library halls. The Strahov library in Prague holds some 200,000 books and manuscripts and is one of the most famous libraries in the world. 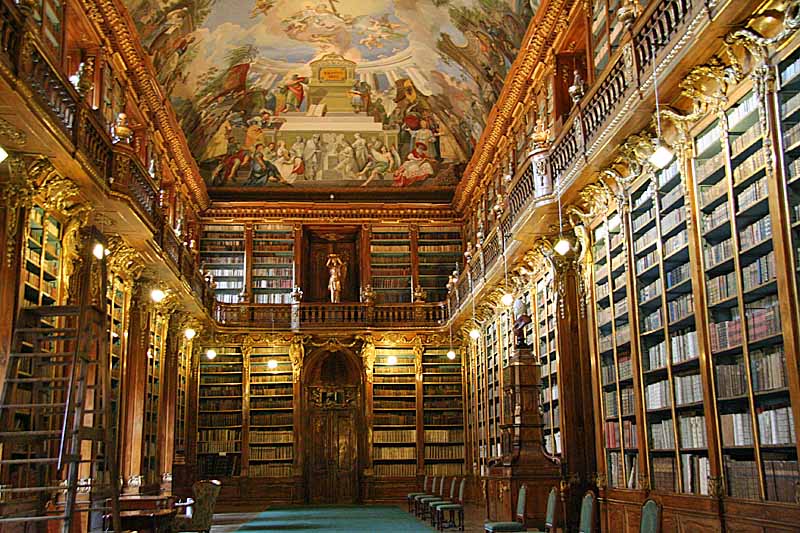 The most famous and oldest manuscript in the library is the gem-studded Strahov Gospels. The facsimile on display in the hall is as impressive as the original. In addition to the Gospel, there are a series of books about Czech trees. They are very special as the spine of each book is made of tree bark.

The book of Library Rules will make you smile. In beautiful calligraphy the book tells what is expected from the librarian. The book lies open on the pages which tell what he should do if a book is damaged or cannot be found. The last line reads: When the librarian discovers that a book is missing … We will never know what action to take because that’s on the next page. 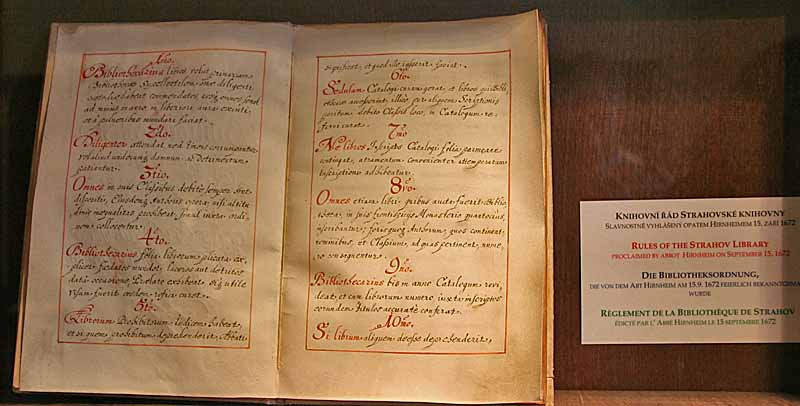 The Philosophical Hall is breathtaking. The first thing that strikes you is the floor to ceiling bookcases containing 42,000 philosophical texts. The size of the hall is impressive: 32 metres long, 22 metres wide and a 14-metre high ceiling decorated with frescoes. One painting depicts ‘The Intellectual Progress of Mankind’, a quest for knowledge about the secrets of the universe. Other frescoes show Noah building the ark, the philosophers Socrates and Diogenes and Alexander the Great.

There are two levels to the bookcases. The bottom level has rolling library stairs to reach the books on the upper shelves. The top level is accessible from hidden spiral staircases. These stairs look like the spines of books that are painted onto the wooden door leading to the stairs.

At the end of the 18th century, Strahov library gained fame all over Europe and prominent people started to visit the library. Their names were recorded in the visitors’ book that dates back to 1792. Initially, women were not welcome due to monastic rules. 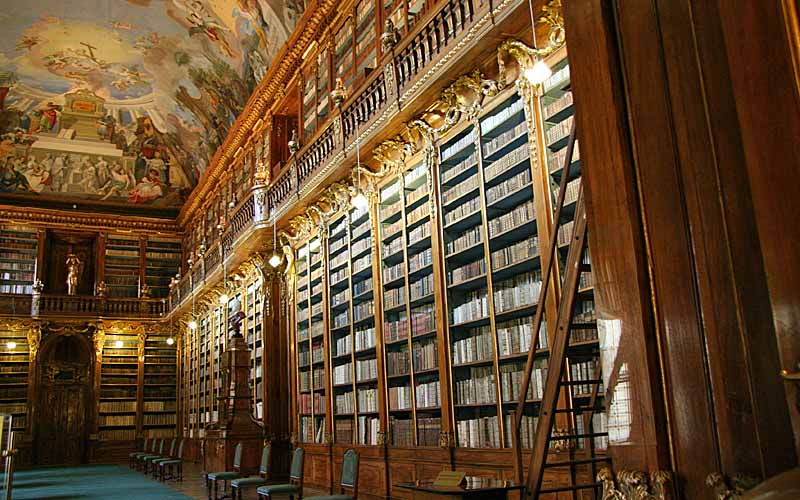 Philosophical Hall and the Books

Books in a library have to be catalogued and rebound from time to time. Librarian and archivist Prior Cyril Straka did this job in the first quarter of the twentieth century. He was also an expert on bookbinding. He was a good organizer and named the two halls after philosophical and theological texts and study material. The philosophical hall holds books of all the sciences and also other subjects taught in universities in combination with philosophy such as astronomy, mathematics, history and philology. Opposite the entrance doors, at the far end of the hall stands the bust of Prior Straka.

The bookcases in the Theological Hall contain over 18,000 religious texts, mainly Bibles or fragments from Bibles in various languages. The bookcases look much more ‘modern’ than in the Baroque Philosophical Hall. The architect of this hall was Italian and Italian influence is clear to see in the stucco above the shelves. The main colour is red which refers to the sacredness of the book which they certainly were in their time. In the centre of the hall are several seventeenth-century geographical and astronomical globes. 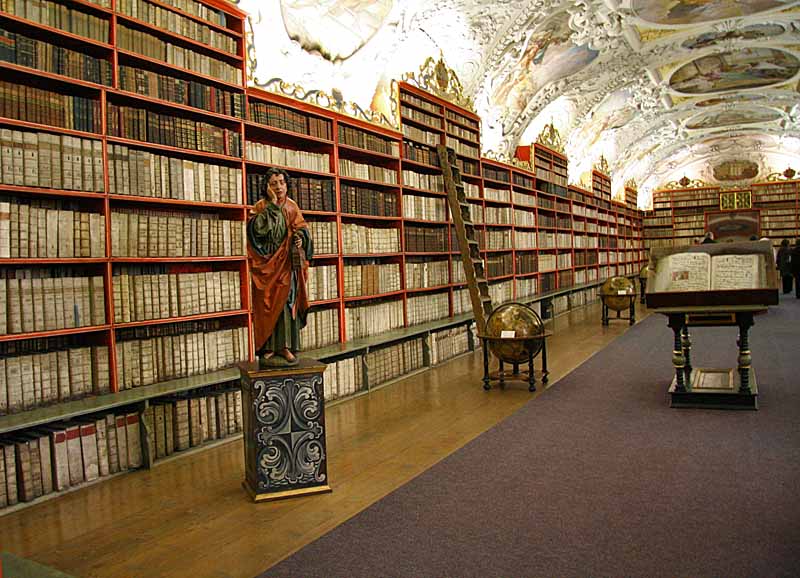 At the entrance of the room stands a wooden statue of St John the Evangelist holding a girdle-book in his left hand. Girdle books were portable books and a fashion accessory in medieval days. The book’s leather binding ended in a tail with a knot and formed a pouch. The book was attached to the belt or girdle. They were popular because these books were fashionable, it was hands-free carrying of a book besides they were protected from theft.

A number of globes (both astronomical and terrestrial) line both sides of the Theological Hall. Some come from the workshops of Willem Janszoon Blaeu that produced atlases and globes during the sixteenth and seventeenth centuries.

Strahov acquired the Cabinet of Curiosities, also known as Wunderkammer, at the end of the eighteenth century. The term refers not to a piece of furniture but to a room where treasures of the natural world were displayed. They are the forerunners of modern museums.

The cabinet of curiosities comprises animals, including the remains of a Dodo bird, insects, wax replicas of exotic fruits as well as a model of a warship, cannonballs and military boots. Also on display are desiccated remains of sharks, turtles and other sea creatures. They were collected by seamen who wanted to impress townspeople with ‘sea monsters’. National Geographic Channel did not yet exists and only travelers or seamen saw these exotic creatures. 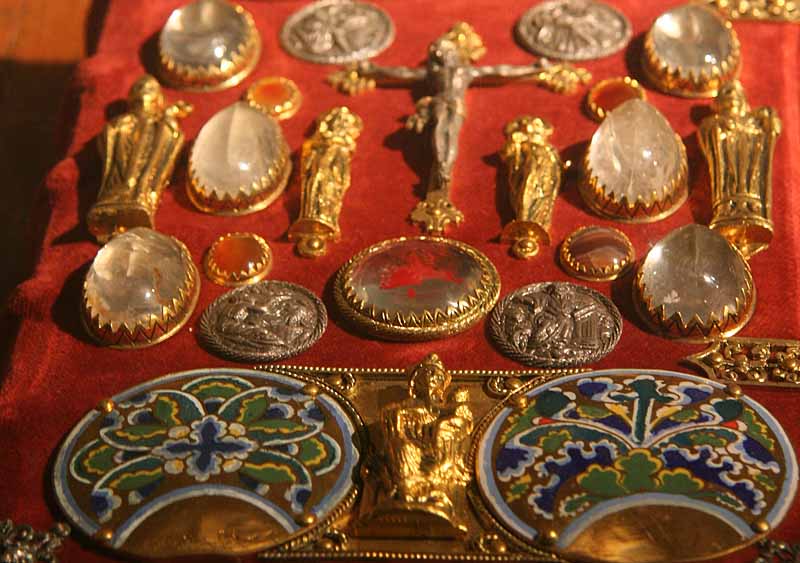 Strahov Library is located next to the monastery on Petrin Hill close to Prague Castle.

Public transport
Tram 22 to the Pohorelec stop. Walk straight on to Pohorelec street. Take the stairs that lead to Strahovski nadvori and the Strahov library. 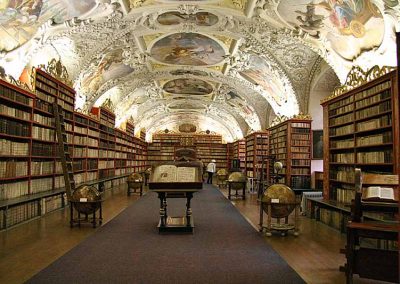 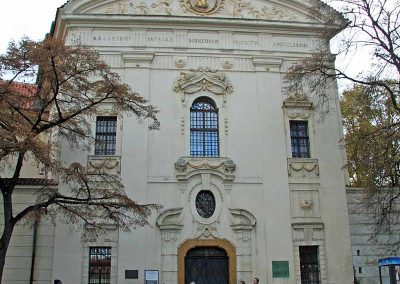 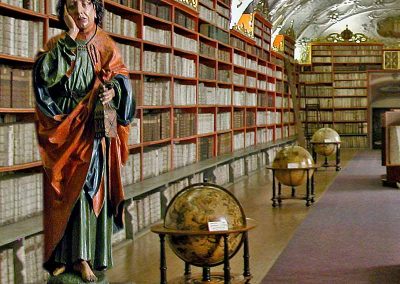 St John and the girdle book 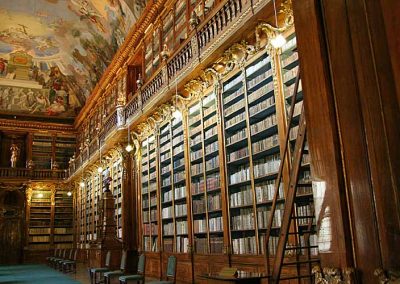 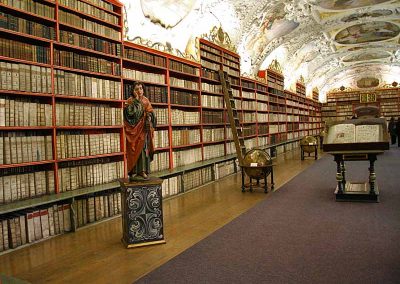 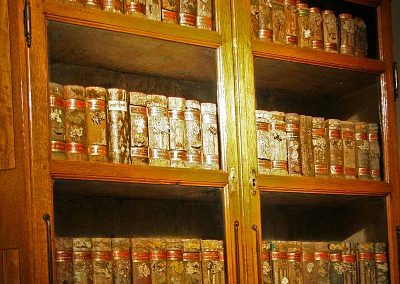 Books about trees with bark spines 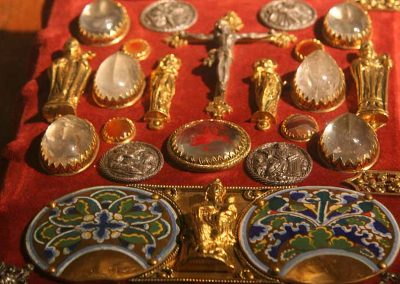 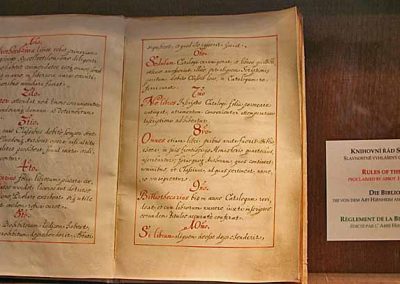 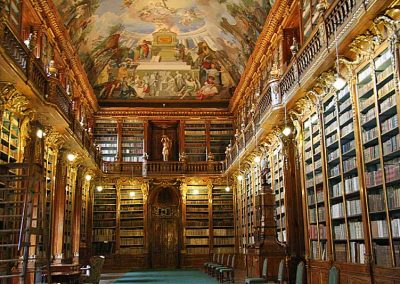 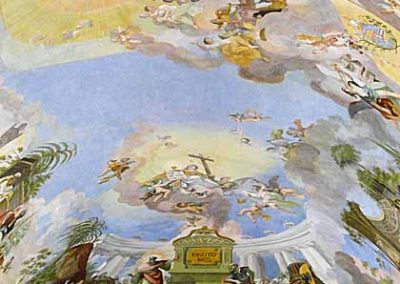