Charles Bridge is the best loved bridge in Prague and always full of people milling about. While most tourists saunter up and down at least once during their visit to Prague, locals hardly ever walk across, preferring a tram or metro when they have to get to the side of the Vltava River.

Charles Bridge, Karluv most, in Czech spans the Vltava River and connects the Stare Mesto (Old Town) to Mala Strana (Lesser Quarter). The bridge is the most famous sight in Prague, pedestrian only, and definitely tourist territory. The slightly curved bridge teems with Baroque statues. Tourists amble up and down, inspecting the tiny stalls selling trinkets, artwork and Charles Bridge souvenirs while buskers play mini concerts and hope for generous admirers. 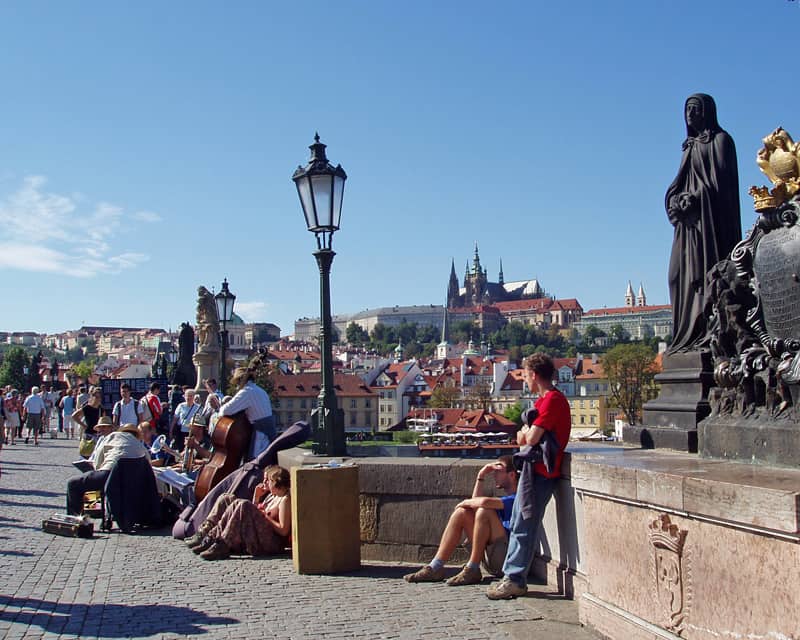 Charles Bridge and the Statues

Charles Bridge is adorned with 30 sculptures. The idea of an open-air gallery of sculptures is Italian, after the model of the Angel Bridge in Rome. However, the decorations on the bridge did not originate at once but gradually.

All sculptures are replicas. As the original sandstone ones weathered badly, they are now in the Lapidarium Museum, the official depository for Prague’s sculptures that are threatened by demolition or the weather.
The statues stand on both parapets of Charles Bridge and most of them were erected in the early 18th century. Aristocrats, the Church, universities and the City of Prague commissioned them.

1. The Crucifix
The earliest statue to appear was the Crucifix. The Hebrew inscription reads ‘Holy, Holy, Holy is the Lord of Hosts’. Legend has it that one of Prague’s Jewish inhabitants was found blaspheming on Charles Bridge. His punishment was to pay for a cross to be erected on the bridge. You can see the crucifix in the middle of the bridge on the right side when coming from the Old Town.

2. Turkish Jailer
On your left just before the Mala Strana Bridge Tower stands a statue that features a snarling dog and a potbellied Turkish jailer guarding three persecuted Christians. The prisoners behind the prison bars look desperate. The onlooking friars seem not to care. 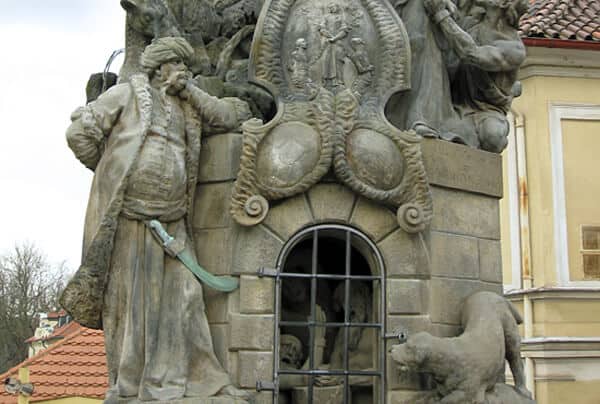 3. Nepomuk
The most popular statue is St John Nepomuk and easy to spot because of the halo of five gold stars encircling his head and a crowd of tourists in front. Approximately in the middle of the bridge a relief on the balustrade shows the drowning of John Nepomuk, who was canonized in 1729.
Nepomuk, General Vicar, was drowned at the order of King Wenceslas IV, because he had confirmed against the King’s will, the installation of the new Abbot of Kladruby Abbey and not, as is generally believed, he had refused to betray to the secrets confided to him as the Queen’s Confessor.

4. Toll House
At the end of the bridge, on the left-hand side, in front of the Mala Strana bridge tower, you will see a beautiful Renaissance house which was once the toll house. 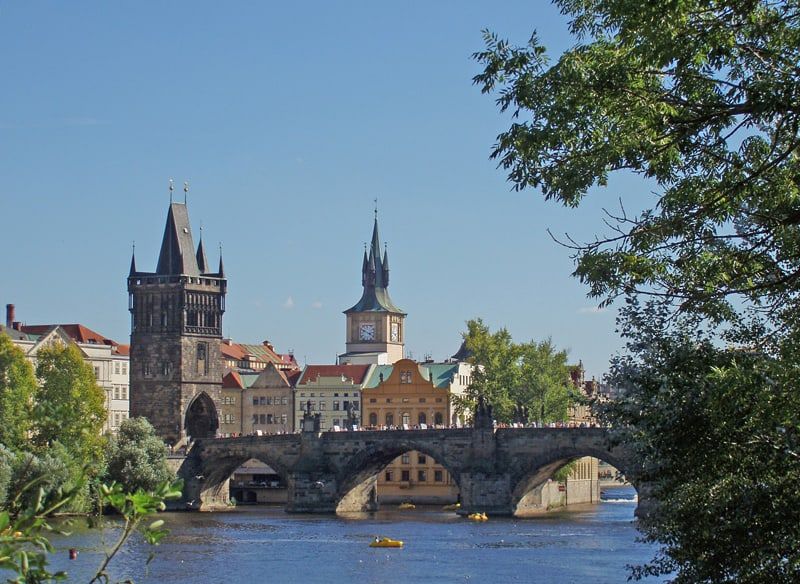 The History of Charles Bridge

Charles Bridge is 516 m long, 10 m wide and rests on 16 arches and is built of sandstone blocks. On the Old Town side, the Old Bridge Tower formed and integral part of Prague’s fortifications, its facade a riot of mini-sculptures. For a bird’s eye view of the surrounding area, you climb to the top of the tower. On the Mala Strana side, the bridge ends in two towers. The shorter one stood guard over the old bridge, Judith Bridge, which was swept away in a flood.

After the bridge was constructed, it became one of the centres of town life. It was the scene of trade activity, court judgment and tournaments. Besides, its military significance was also considerable: the Swedes waged their attack on Prague in 1648 and destroyed the Old Bridge Tower in the battle. The Royal Route, the traditional coronation route of the Bohemians kings, went across Charles Bridge and then up to Prague Castle.

In the time of Emperor Charles IV there was little distinction between science and mysticism. This also extended to architecture and urban planning. That’s why building projects started on an astrologically propitious date and time. Charles IV was actively involved in urban development. He ordered the construction of a new Prague district, today’s Nove Mesto, as well as Prague Castle and Charles Bridge.

Royal astrologers were involved in the construction of the new bridge and chose July 9, 1357 at 5:31 am as a propitious time. The numbers 135797531 above the entrance to the Charles Bridge Museum on Krizovnicka, the small square next to the bridge, are not random. They indicate the day and hour chosen by the astrologers to start the construction of Charles Bridge. These numbers are a numerical palindrome: all one-digit odd numbers arranged from lowest to highest to lowest. It says the same when reading them backward or forward. It is also the moment of Saturn’s favourable position in the sky. 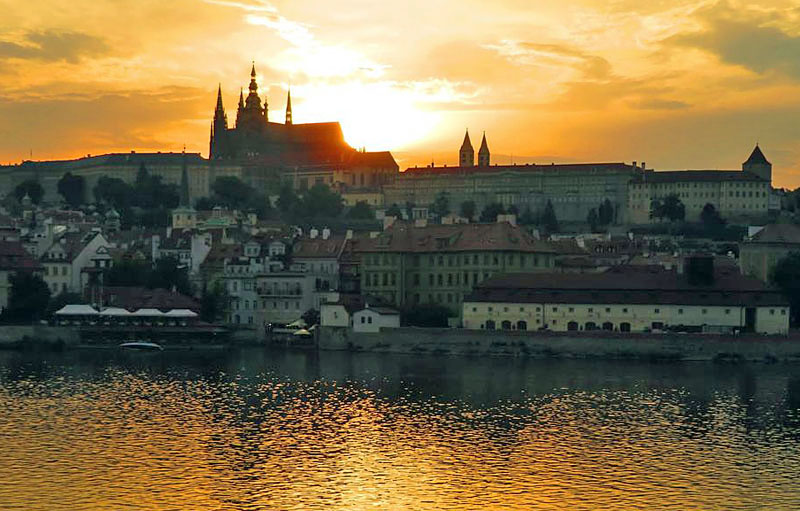 Astrologers and the Setting Sun

During the solstice (between 20 and 22 June) the sun sets directly over St. Vitus Cathedral. When standing on the bridge on the Old Town side, one hour before sunset you can see the sun slowly moving towards the cathedral and then setting right behind the towers. This is no coincidence as it is known that Charles IV had an above-average interest in astrology. It is not without reason that Petr Parléř, the architect of the bridge and the cathedral, placed the bridge at a slightly different angle from that in which the original Judith Bridge had stood in 1357. 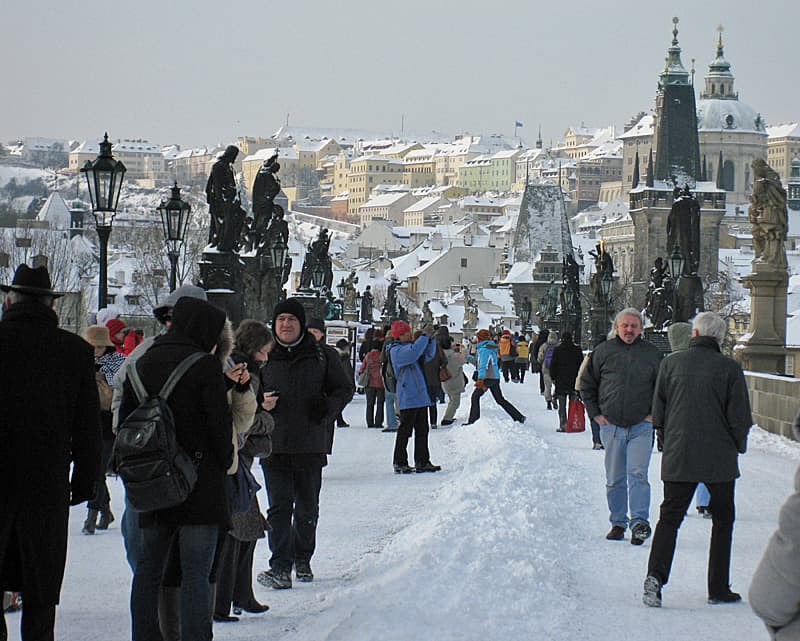 The Curve in Charles Bridge

For more than six centuries there was only one place, the Judith Bridge, where one could cross the Vltava River. The Judith Bridge, the predecessor of Charles Bridge, was of vital importance to Prague because it was the only place to cross the river.

After part of the Judith Bridge collapsed on the side of Mala Strana in 1357, the construction of Charles Bridge started. This new bridge has two prominent features; the bridge is more than ten metres wide, which is gigantic for that time. This is due to Charles IV, who commissioned the construction of the bridge and demanded: “At least four carriages must be able to cross the bridge side by side.” 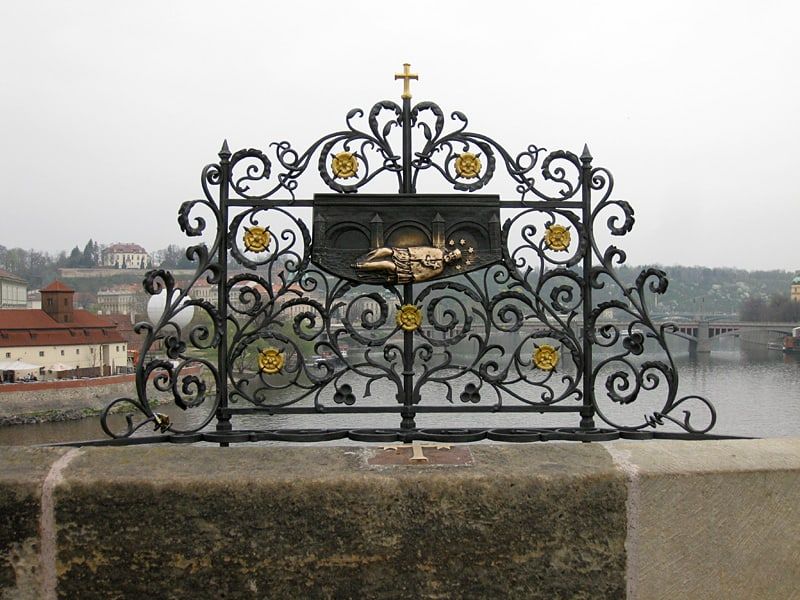 The View from Charles Bridge

Charles Bridge offers a wonderful view of the Prague Castle and St. Vitus Cathedral. On the other hand, if you want to see the bridge itself, the best place is from Smetanova quay next to the Smetana Museum.

Kampa Island is another excellent place to view the bridge. Kampa is the largest island in the Vltava. When in the spring the southern tip is ablaze with pink blossoms. the path along the river is the favourite place of every photographer because from here they have the best view of Charles Bridge.

Go up to Petřín Hill or take the cable car for another spectacular panorama of the bridge. Climb the 299 steps of the Petrin lookout tower, a miniature version of the Eiffel Tower. With Prague Castle as a backdrop, the Vltava River and Charles Bridge stretch out before you. The crowds on the bridge are crawling like ants. The spires and domes in the Old City sparkle in the sun. On the west side, the silhouette of Saint Vitus Cathedral is sharply contrasted with a cerulean sky.

Amble at least once across Charles Bridge during your Prague city trip, admire the sculptures and stay in front of the crucifix for a moment. Only when you have done this, have you truly been in Prague!

Are coming by plane and do you need transport from the airport?

Pre-book your airport shuttle transfer and enjoy door-to-door transport from the airport to your hotel. It will save you the hassle of finding out where to buy your public transport ticket. Your English-speaking driver will take you to your hotel in the centre of Prague. Journey time is about 45 minutes. Opt for a one-way or round-trip transfer.

Tram
Take tram 8 or 18 to the Karlovy Lazne stop. Keep the Vltava on your left and walk to Charles Bridge in two minutes. You will pass the Smetana Museum. Bedrich Smetana was a Czech composer known for his opera ‘The Bartered Bride’. 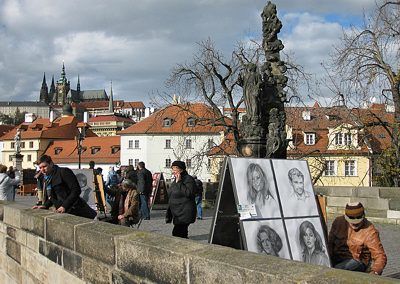 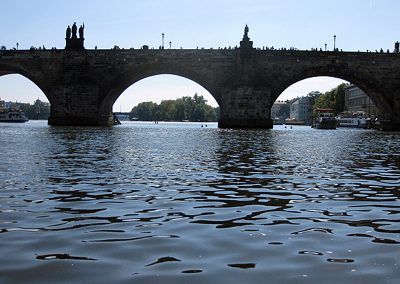 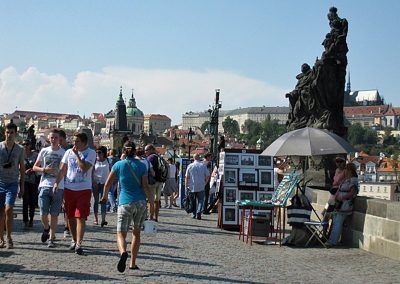 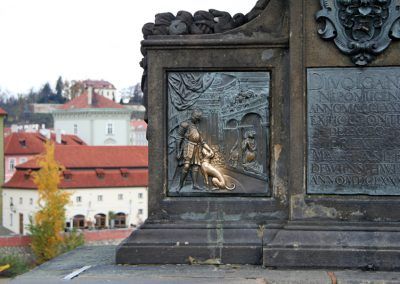 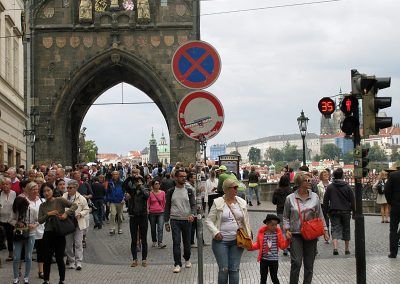 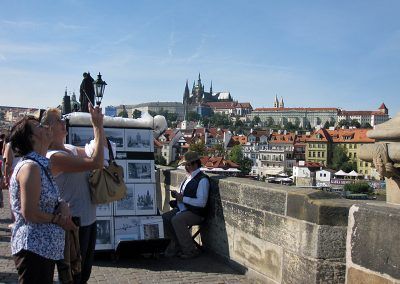 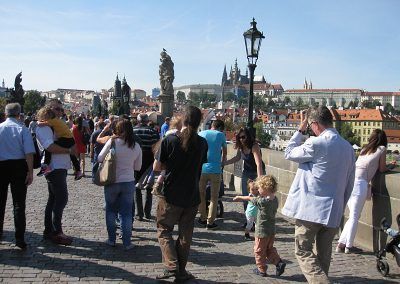 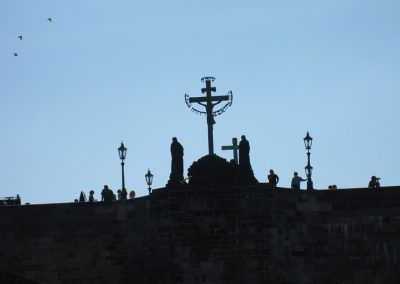 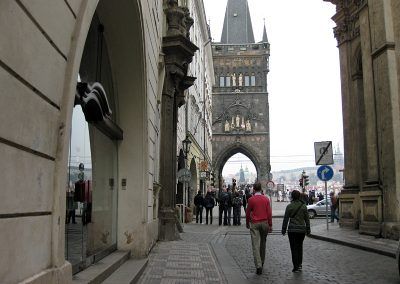 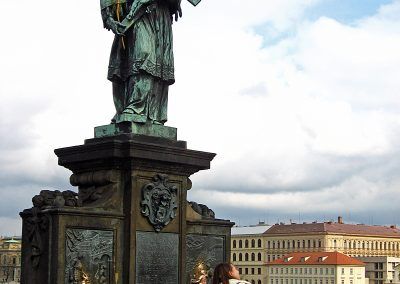 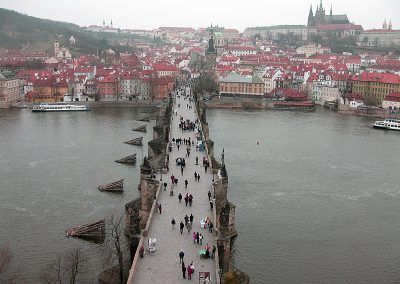 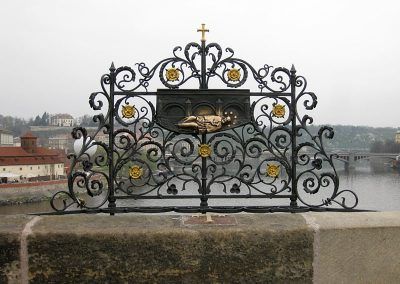 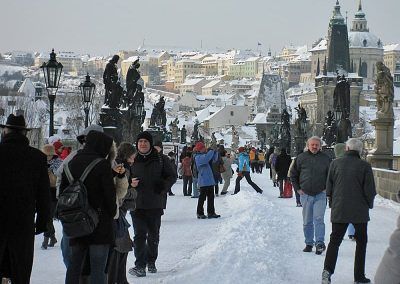 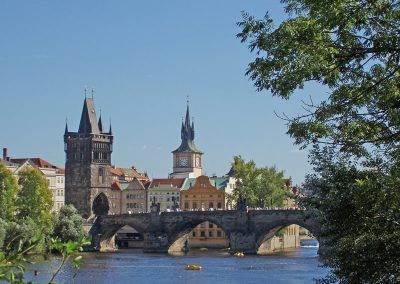 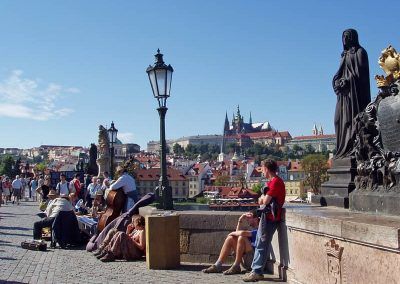