Kavarna Fantova – Coffee Day is a special café  for two reasons: it is the Art Nouveau gem of Prague Central Station and it serves fragrant, strong and tasty coffee from India. Art Nouveau enthusiasts cannot leave Prague without having seen the train station: a masterpiece of Art Nouveau style. Besides, Fantova is an excellent spot to wait for your train or for one of the international buses that have their terminus right in front of the café.

The main railway station in Prague is an architectural treasure; at least it was when it opened in 1909. The design was inspired by la Gare du Nord in Paris, which stood model for many European train stations. Between 1972 and 1979, during the communist period, the station expanded with a new terminal building right in front of the old building. This new extension is a prime example of communist architecture and an eyesore to many. The beautiful art-nouveau details of the old station played second fiddle. Nobody noticed its beauty anymore: the dome, the stained glass windows and the women’s faces that symbolize Prague as the mother of cities, the stylish letters ‘Praga mater urbium’ and the date 28 October 1918, when Czechoslovakia was founded. The new building gave access to the platforms. This was where travellers bought their tickets and where they had a coffee in modern cafe bars. The new building became more important while the old historic building lost its train station functions and gradually dilapidated.

However, all this changed when a complete renovation took place between 2010 and 2011. First, the communist-built part of the station was remodeled and then the historic building was restored to its old glory. Today, the concourses are cheerful and full of bright shops that form a mini shopping mall. The historic building with swirling art nouveau details sparkles in all its glory. The train station is now split into several levels and accessible by escalators. You will find here luggage lockers, currency exchange offices (note: at an unfavorable exchange rate), ATMs, information and ticket-sale counters and lots of travelers. On platform 1 is a beautiful statue in memory of Nicolas Winton, who in 1938 and 1939 ensured that hundreds of Jewish children could travel safely to the West where foster families received them. There is no shortage of fast food outlets, restaurants, cafes. And there is Kavarna Fantova. 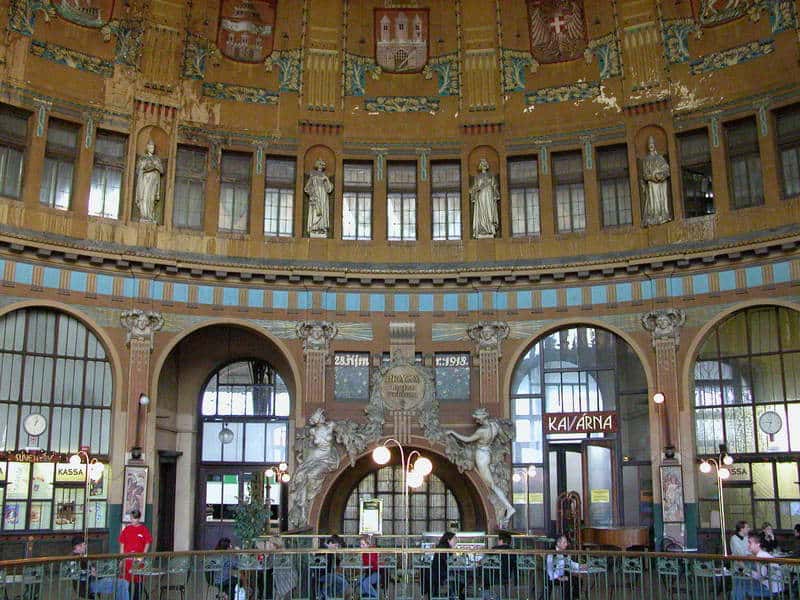 Kavarna Fantova is the Art Nouveau pearl of Prague Central Station. Located in front of the original main entrance underneath the dome, it is reminiscent of past glory. Fantova Cafe is named after Joseph Fanta, the architect who designed the building. This rotunda used to be the place where people bought their train tickets and from where they would depart in style to various European cities. This is shown in the coats of arms overhead, from right to left: Berlin, Moscow, Vienna, Prague, Budapest, Paris and Rome.

Coffee Day was until 2020 the owner of Fantova Kavarna. This Indian coffee company has its own coffee plantations and is immensely popular in India. Coffee Day India receives 300,000 coffee loving Indian visitors a day who can choose from twenty-two different blends. However, the European branch has only four blends so that you can try all four flavours. Be sure to taste Coffee Day’s lime cheesecake, homemade in their tiny kitchen, or one of the other delectable pastries. This modern outlet in a traditional place offers table service, fast and efficient so that you will not miss your train. Coffee Day Kavarna Fantova is modern coffee with old style flair.
In 2020 a new tenant took over Coffee Day, Fanta’s Cafe. Be sure to come for a coffee, soft drink and their freshly made cakes and ice-cream.

How to get to Kavarna Fantova

Kavarna Fantova is inside the main train station and slightly difficult to find. Follow the icons of escalator up and a domed building with two towers. Some signs say ‘Historicka budova nadrazi’ , historical building of the station. You go up an escalator and the kavarna is in front of you. 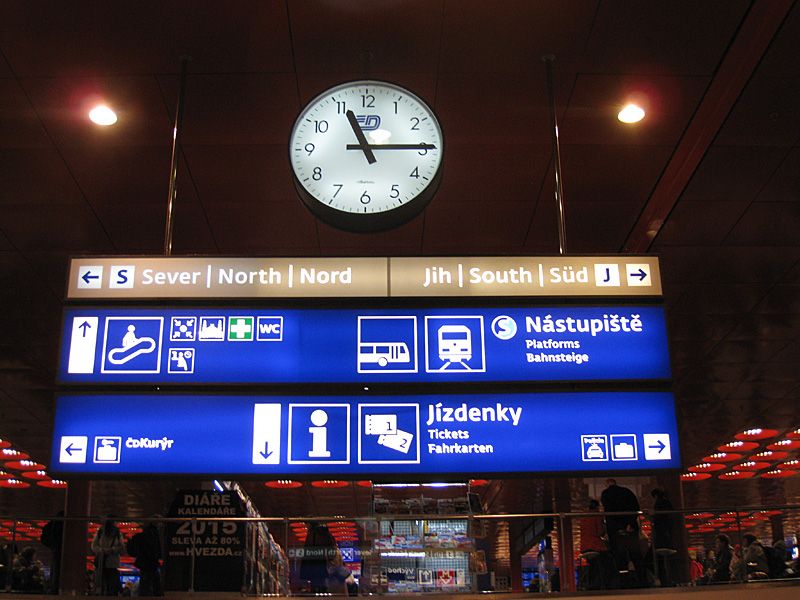 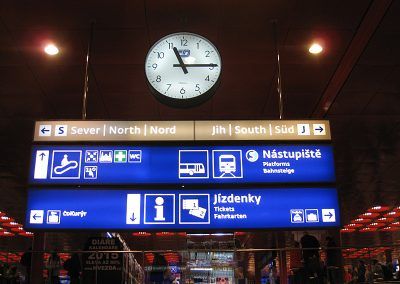 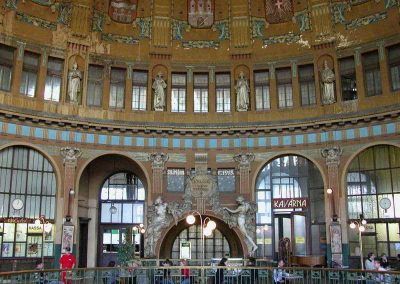 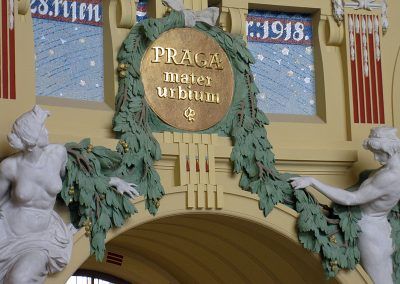 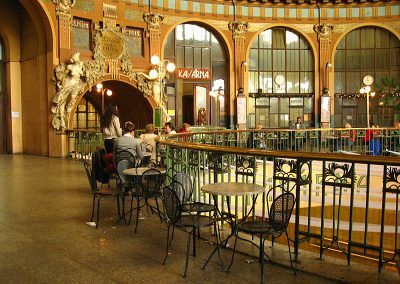 Kavarna before it was Coffee Day 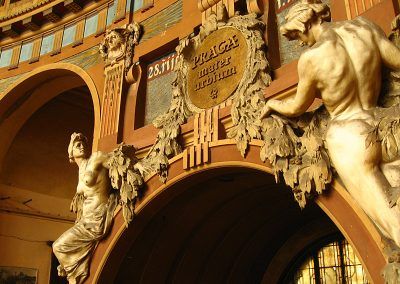 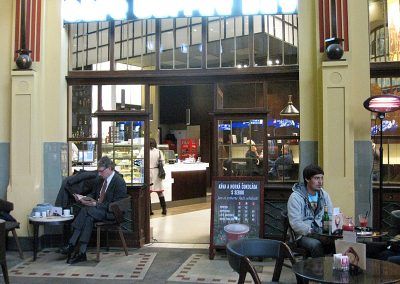 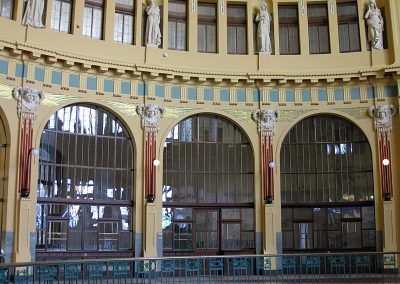 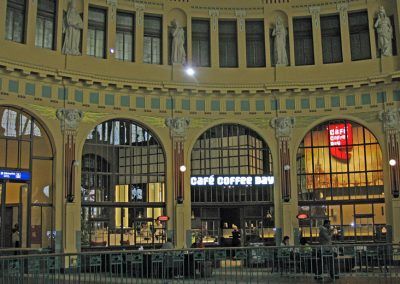 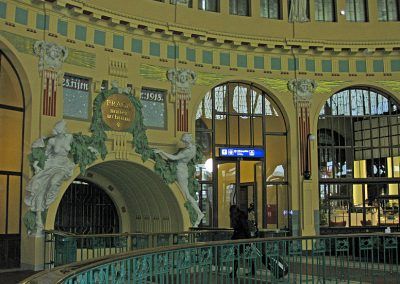 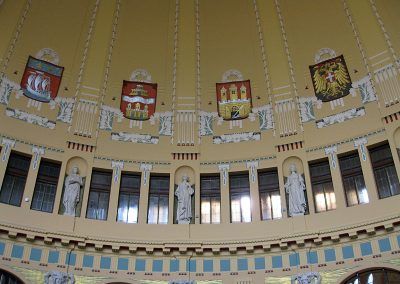 The dome of the railway station building 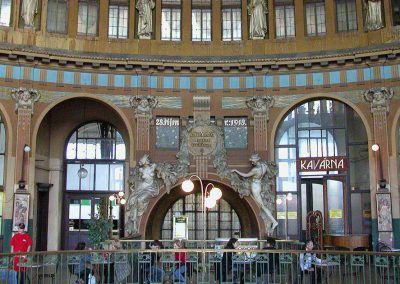