Kolbenova is one of the stations on metro line B. Few people, and even fewer tourists, get off here. But if you like industrial heritage and dilapidated factories, Kolbenova is the perfect neighbourhood to look around. For how long is unknown because the city of Prague has started building houses on the former factory site. The new residential area, Emila Kolbenova, as well as the metro station, bears the name of engineer and entrepeneur Emil Kolben. Visitors to Prague have already met Kolben without realizing this. Every tram in Prague has a small logo with the letters ČKD. The Č stands for Českomoravská which means Bohemian and Moravian; the K stands for the name of the founder of the engineering company, Emil Kolben, and the D stands for Daněk, the name of the business partner with whom he merged after the First World War.

The Pragovka art center in the Vysočany district is located on the site of the former Praga factory founded at the end of the nineteenth century by Emil Kolben, and now a place where artists and art lovers meet. The retro-themed ‘Pragovka Cafe’ in the former factory hosts film screenings, concerts and festivals and about a hundred artists rent studios here, while the main building of the complex has been converted into an art gallery. 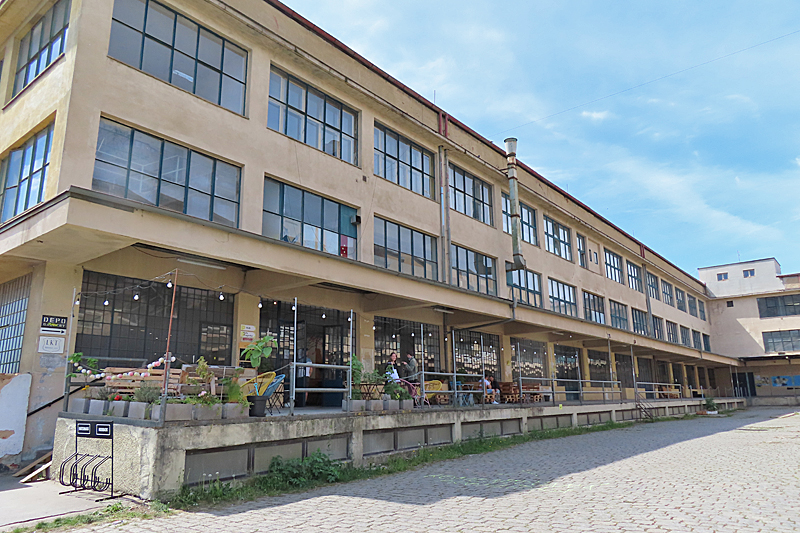 When you step out of the Kolbenova metro station, there is no greater contrast to the splendour of the centre of Prague imaginable. In all directions you can see deserted, dilapidated buildings and factories that once housed 50,000 workers: the Praga Factories where cars, trucks and motorcycles were made, founded by Emil Kolben and the largest engineering company in former Czechoslovakia.
The abandoned factory buildings line both sides of Kolbenova Street. In stark contrast to the old factories a modern office block built in 2020, with 3 underground floors and 19 above ground and 72 meters high stands on Kolbenova Street 9. 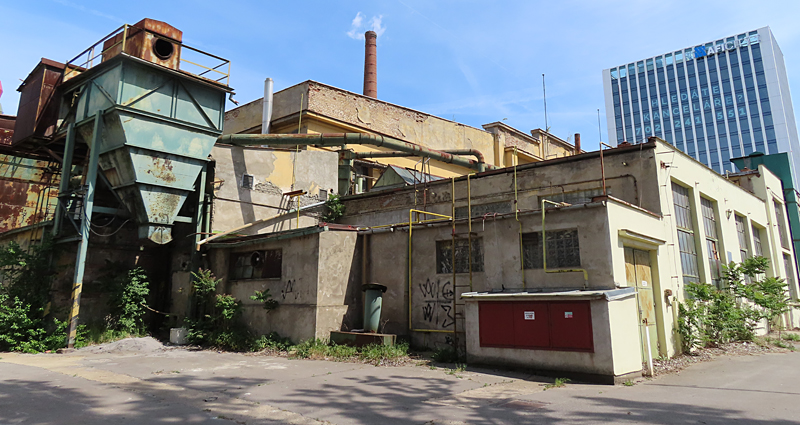 The engineering factory of Emil Kolben (1862-1943) was one of the most important heavy machine factories in the country in the early nineteenth century. After finishing university in Prague, Kolben went to America where he worked as an assistant of Edison and Tesla. In 1898, he decided to return to Prague and founded his own factory: Kolben a Spol (Kolben Ltd), known as ČKD after the merger in 1921. In its heyday, the company employed 50,000 people. The loss of markets in the Eastern bloc countries after the Velvet Revolution in 1989 and to some extent mismanagement in the 1990s resulted in bankruptcy in 1998.

In 1998, metro line B was expanded with new stations including Kolbenova and Hloubětín, designed to transport many workers to and from the factories in this district. Due to the bankruptcy of the Kolben factory, there were considerably fewer people to transport and both stations were relegated to ghost stations, where the trains did not stop. Kolbenova opened only in 2001. A bust in the entrance hall of Kolbenova metro station honours the man, but has since been stolen. Only the pedestal remains. 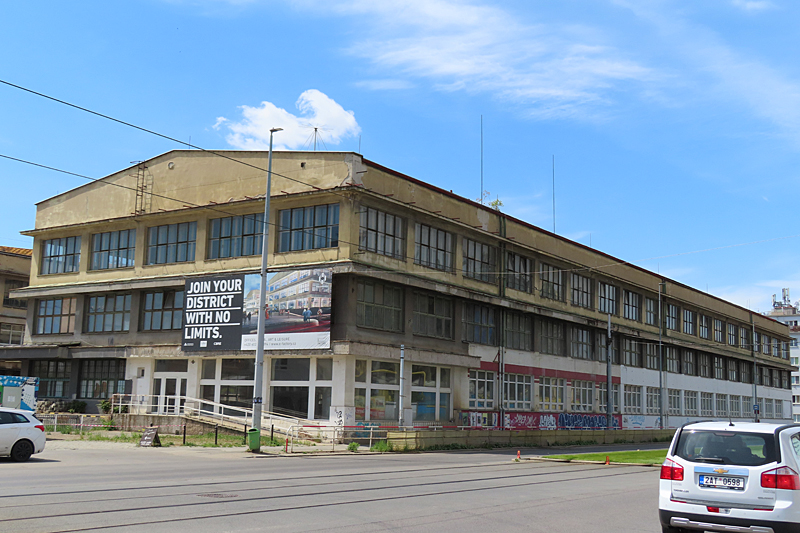 The Kolben factory site opposite the Kolbenova metro station was the location of the largest flea market in Europe: 50,000 square metres of second-hand goods, junk, trinkets, pornography, vintage, fake precious stones, piles of vinyl, old electronics and many counterfeit branded goods. On a rainy day, you needed rubber boots to wade through the puddles and mud. In 2016, the market moved to neighbouring U Electry Street, the same size but less muddy. More about u Elektry Flea Market 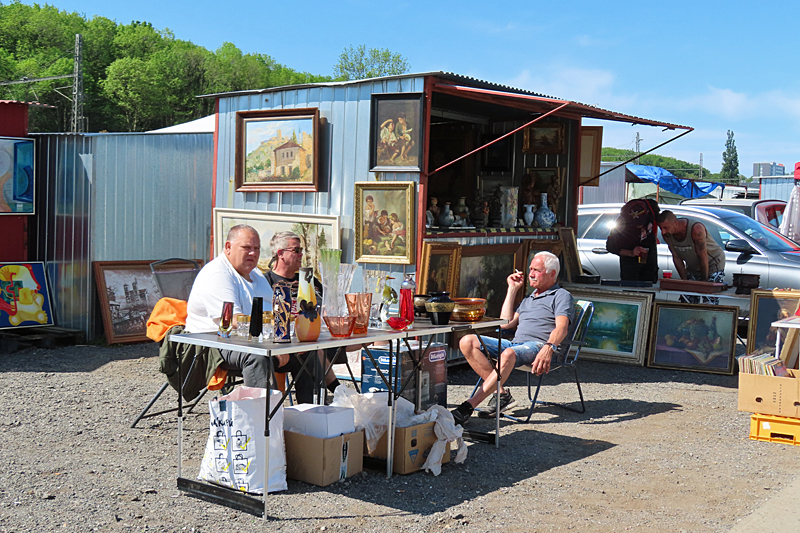 The Kolbenova district with a metro station and unused building plots is extremely suitable for housing. The area around the dilapidated factory buildings is being developed and a new residential quarter is created. To the north of Pragovka art Centre, there is now a ‘capitaliste sídliště (residential area)’, uniform pre-1989-style apartment buildings, the difference being that they are fewer floors, more colourful and well insulated. And much larger bathrooms than in the communist time! The abandoned factory buildings are being revived, a number of buildings have already been refurbished and are now a centre for artists. Future plans comprise another two thousand apartments on derelict land. 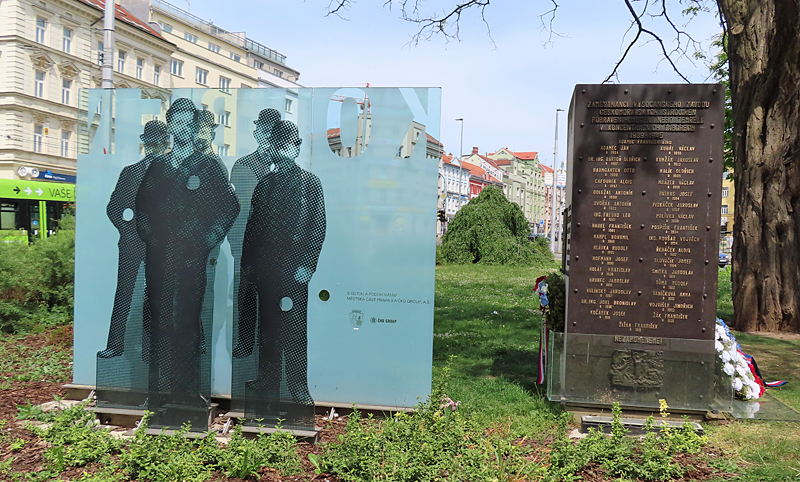 Emil Kolben and the Vysocany District

1. Since 1989, Kolbenova Street has been named after Emil Kolben. The street had several names in the past: Třebízského, later Pod Kolbenkou, in World War II Valdecká, then Fučíkova and now Kolbenova.
2. A new metro stations Kolbenova opened in 2001
3. Jindrich Kolben, grandson of Emil Kolben and the only family member to survive the Holocaust was granted honorary citizenship of Prague 9.
4. On Náměstí OSN (Organizace spojených národů) there is a glass plate with a photo of Kolben and some of his business partners. 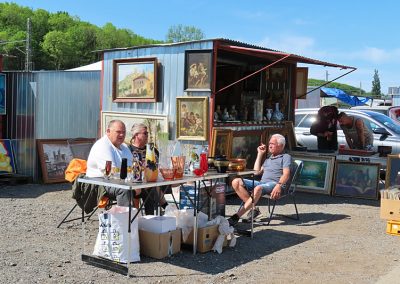 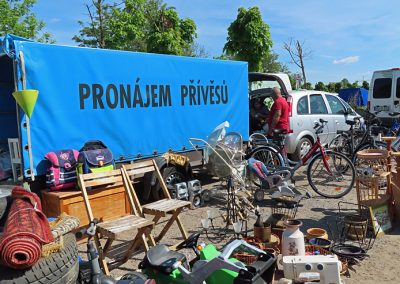 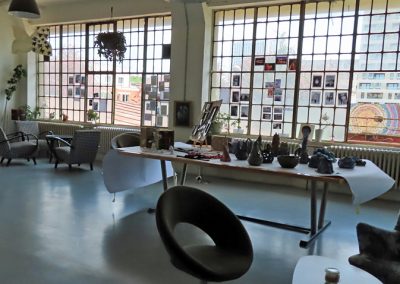 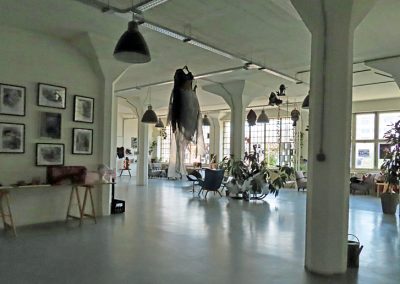 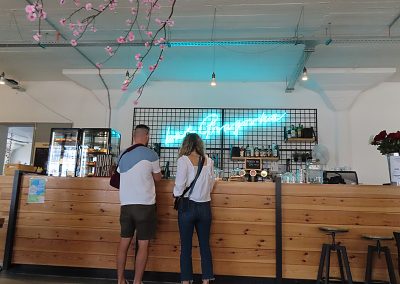 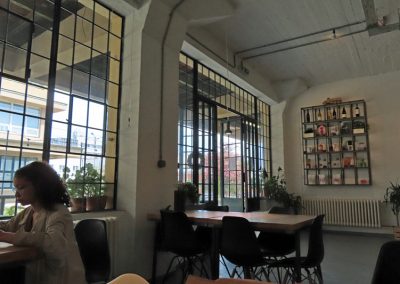 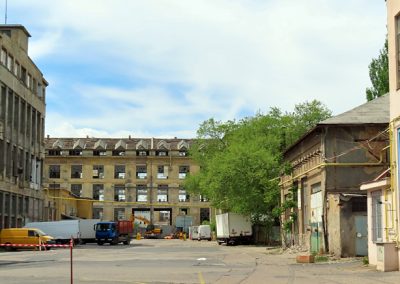 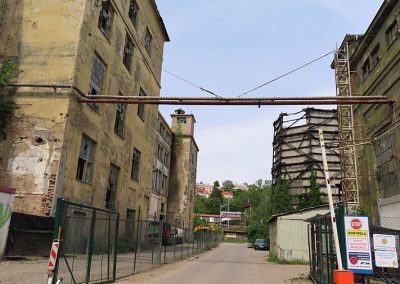 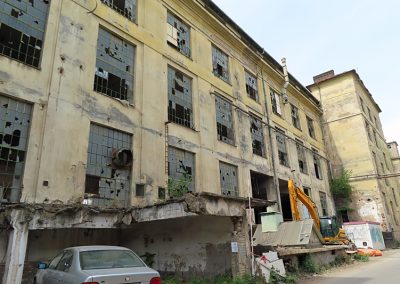 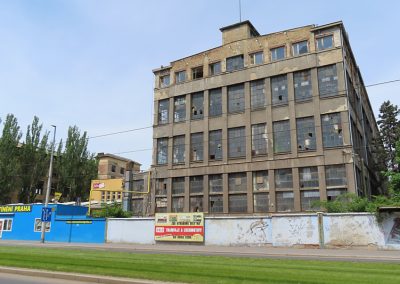 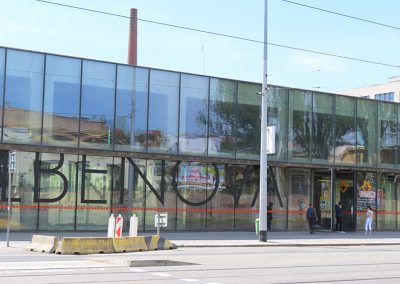 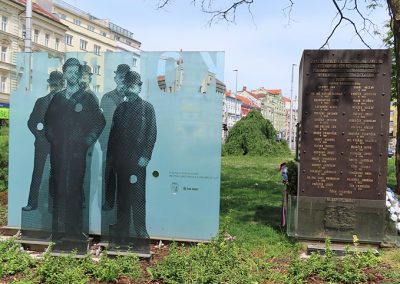 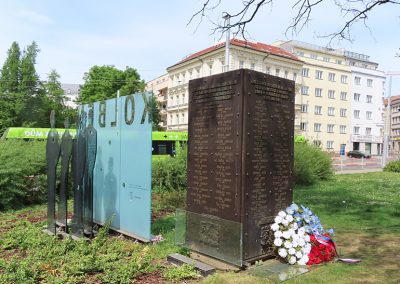 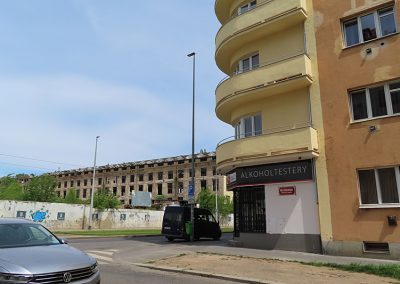 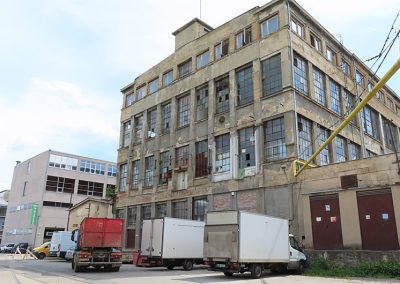 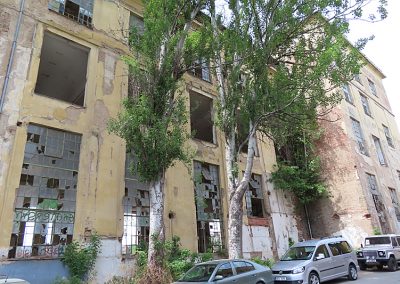 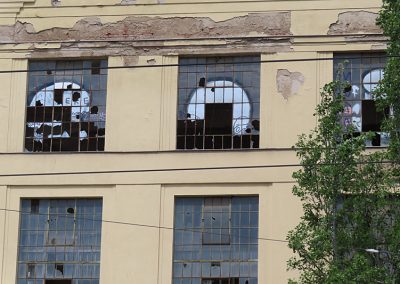 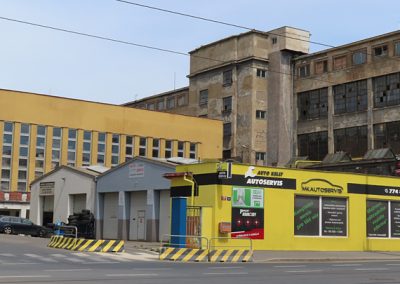 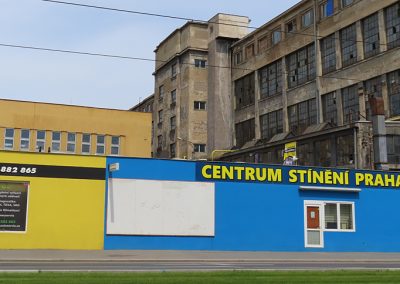 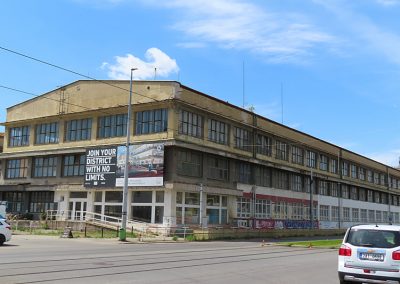 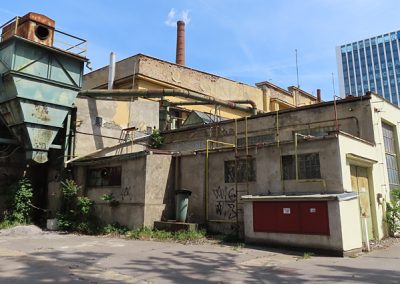 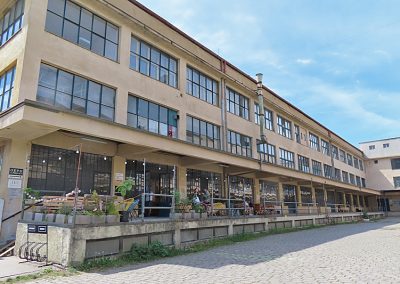 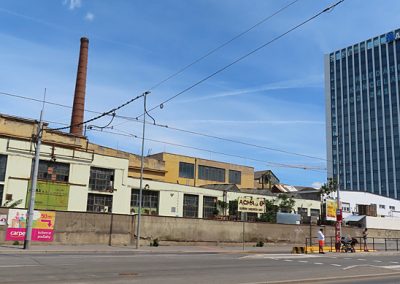