Watch the Spectacle of the Astronomical Clock in Prague

The Astronomical Clock is most likely the best-loved attraction in the centre of Prague. This timepiece does not only tell the time, it also shows the days of the week, the sidereal time and the position of the moon and the sun. Every hour a sea of tourists gather in front of the astronomical clock to see the spectacle of the apostles greeting the crowd below. This timepiece  is easy to spot. Simply follow the throng of tourists hurrying to Old Town Square a few minutes before the hour.

You have never been to Prague and yet this clock looks familiar to you. That is because this clock is the most photogenic landmark in the city. It is also very popular as Christmas and New Year greetings cards, not only in the Czech Republic but throughout Europe. 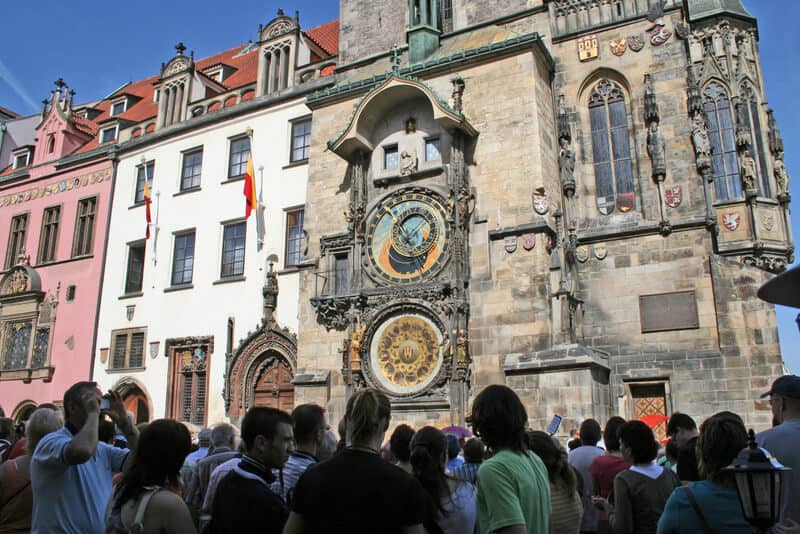 What is an Astronomical Clock?

The main purpose of an Astronomical Clock is to show the movement of the Moon and Sun between the signs of the Zodiac. This derives from the medieval notion that Earth is the centre of the Universe. Measuring the passage of time is secondary. The Astronomical Clock in Prague is composed of three separate units: the procession of the Apostles, the dial and the calendar.

The dial of the Astronomical Clock is a piece of art in itself. The clock face shows three different time zones. The outer circle shows in Arabic numerals the old Bohemian time. The circle with Roman numerals indicates our time, the actual time. The rotating blue background of the dial represents the heaven by day and is divided into twelve parts indicating Babylonian time (they introduced the sexagesimal sytem; that’s why a minute is sixty seconds).

The calendar is composed of twelve inner medallions with the signs of the Zodiac and twelve outer medallions depicting life scenes from country life during the twelve months of the year. The original calender is a precious master piece and can be seen in the Prague City Museum. 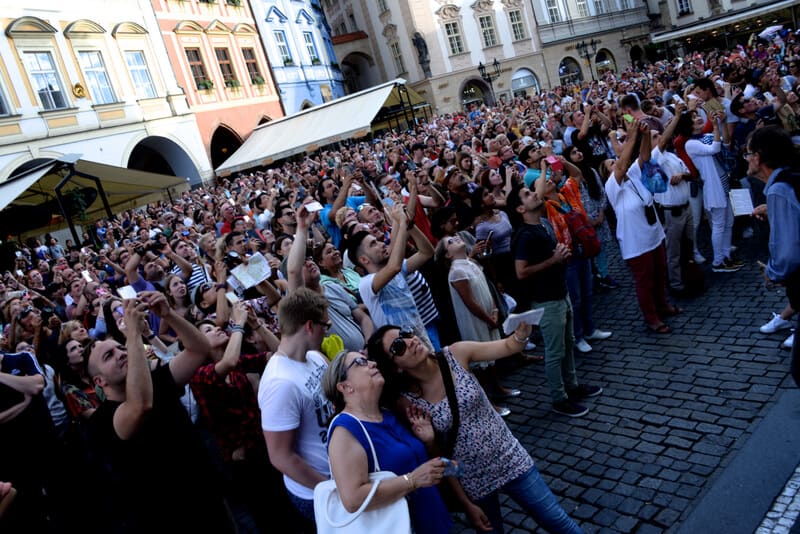 Can a Clock be more complicated?

Certainly, it can! In the nineteenth century the Astronomical Clock got an extra addition. Every hour, on the hour Vanity admires herself in a mirror, Miser clutches a bag of gold under his arm, Death gives a tug on a cord and a Turk shakes his head (to indicate that he does not intend to stop his raids, a reminder of the Turkish invasions of Central Europe in the sixteenth and seventeenth century). A hatch opens and the twelve apostles appear. One by one they make a round and the hatch shuts again. Don’t blink because the spectacle lasts less than a minute!

History of the Astronomical Clock

Mikulas Kadan and Jan Ondrejuv, professors of astronomy and mathematics at Charles University in Prague built the clock in the early fifteenth century. By the end of the century, the calendar was added by Hanus the Clockmaker. The story goes that the city councilors blinded him with a glowing sword so that he could never build a second Astronomical Clock. 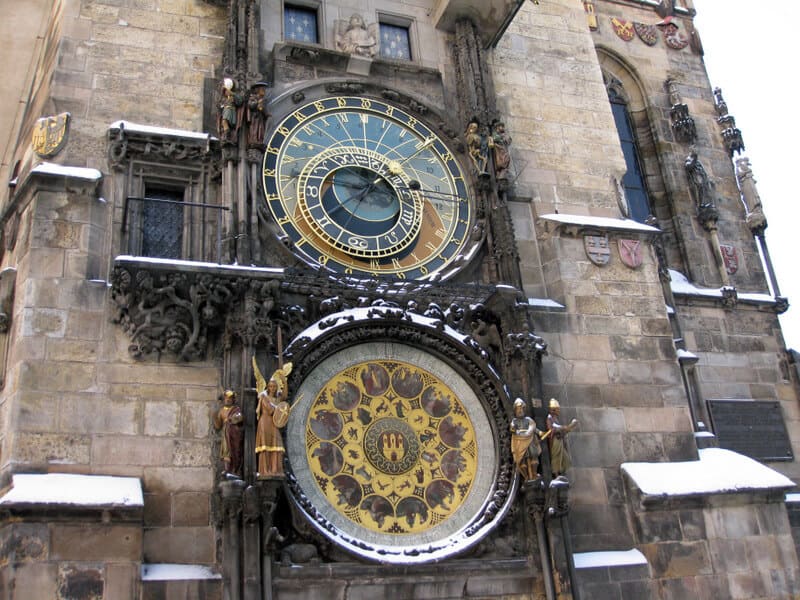 Prague-Now Tip: As the clock is on the south wall of the Old Town Hall the best time to take photos is around midday when the clock is bathing in sunlight. 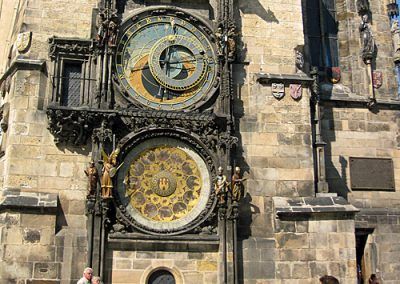 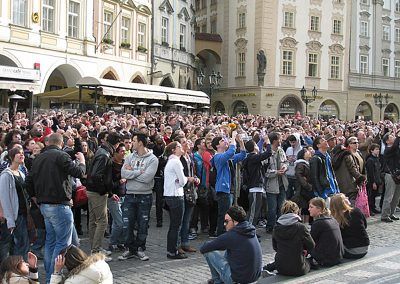 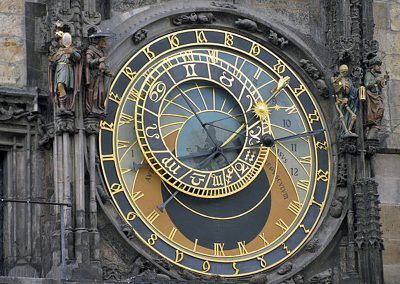 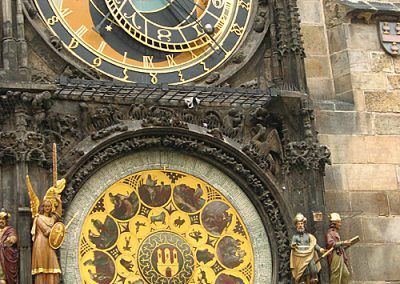 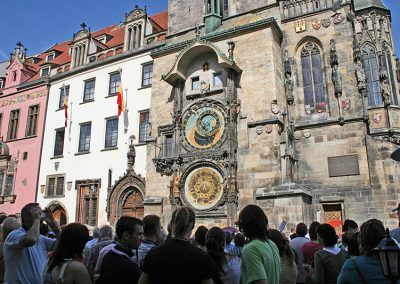 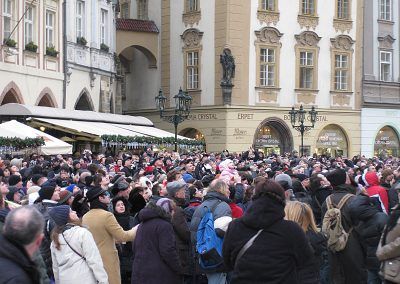 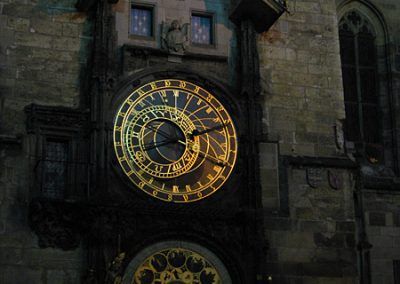 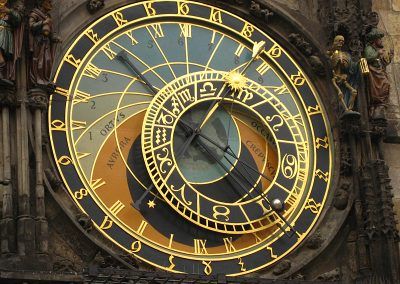 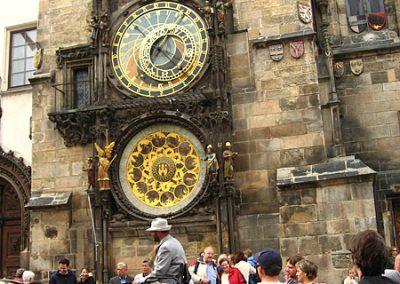 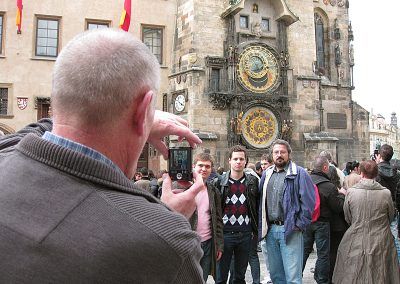 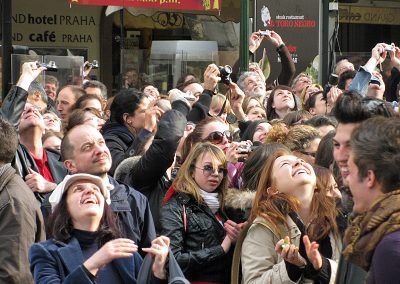