Street art at Vltavska metro station is one of the many places in Prague where you can admire graffiti-sprayed walls. Art or vandalism? Some graffiti painters are true artists and some graffiti is so talented that the work of art deserves a place in a Museum of Modern Art. Grafitti spraying without formal permission is allowed only in one place in Prague: the Tesnov Wall near metro station Florenc. Until July 2019, the John Lennon Wall on Kampa Island was also a place where spontaneous graffiti spraying was allowed. After misconduct of some graffiti amateurs, the wall is now reserved for professionals. 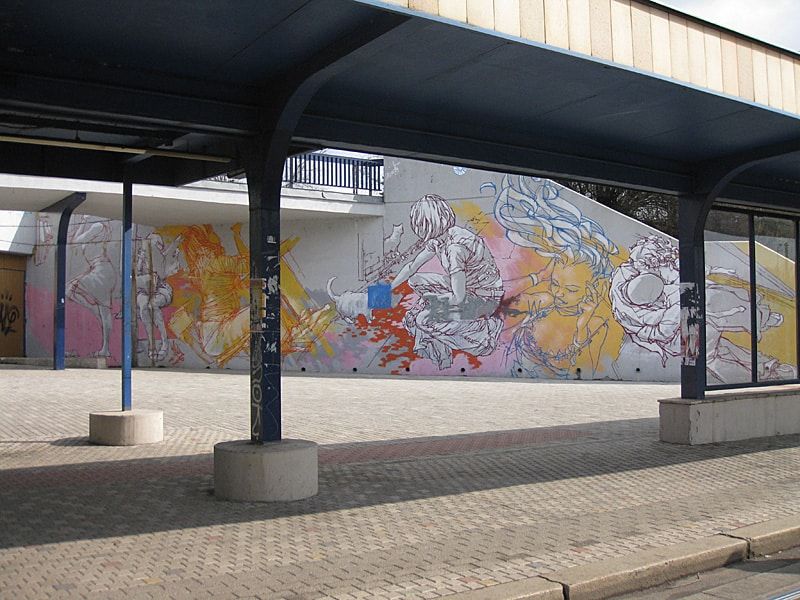 Street art in Vltavska metro station is worth checking out. Vltavska is one of the many stops on the red line C and also a busy tram junction. It is neglected, it is ugly. It is a place no one wants to be unless they need transport. Yet, Vltavska is unique because it has the best street art in Prague. The mural paintings change every once in a while therefore coming back is a must. 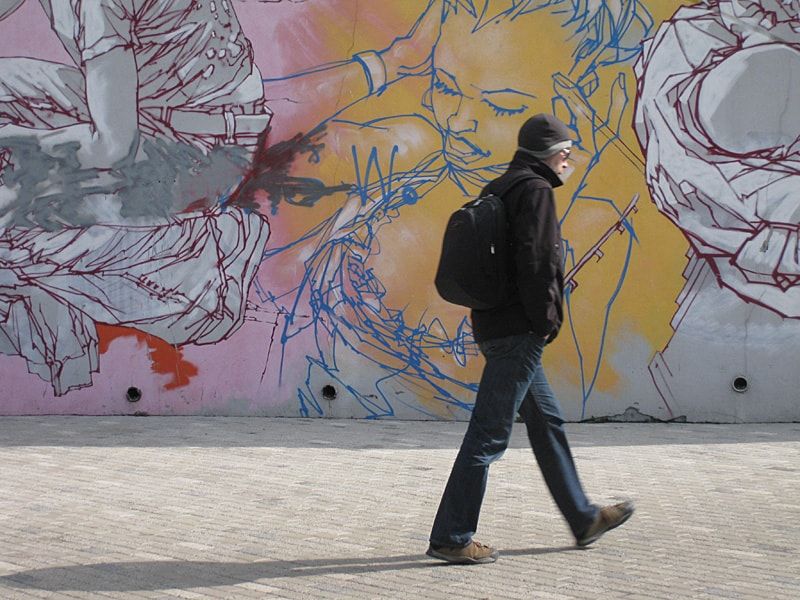 Street art embellishes the walls of metro station Vltavska. The walls have been graffiti sprayed by famous artists like Mode 2 who painted people engaged in doing everyday things: a woman reading a newspaper, a kissing couple, a girl caressing a kitten and another girl listening to music with earphones, all in pastel colours. These paintings are still there but have faded slightly. Another part of the wall is graffiti in chrome and black paints; a statement showing that commerce has taken over street art. 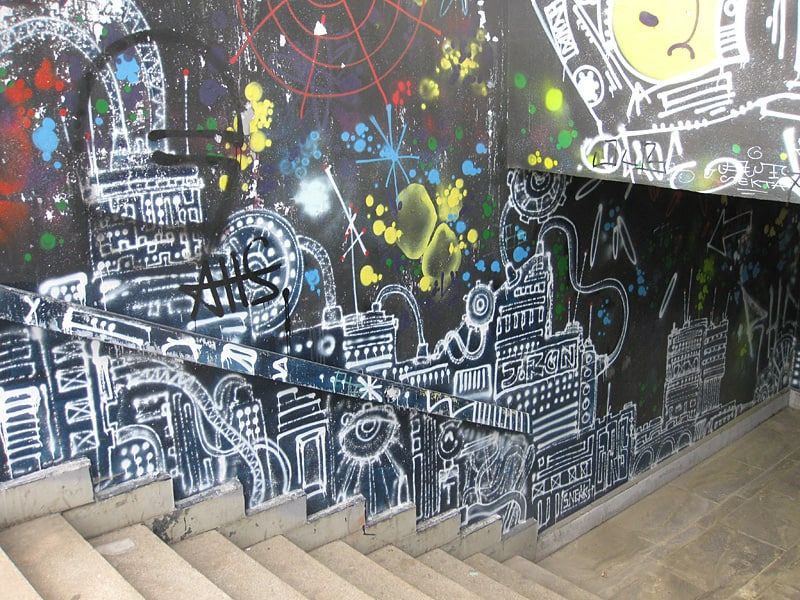 Tesnov is the only legal graffiti wall in Prague. It is under a number of elevated fly-overs and next to a parking lot. It is a deserted place, but safe at night because of the good street lighting. Come during the day when you want to see the artwork in all its glory. Come early in the morning or at weekends if you want to leave your mark in Prague. Later in the day, parked cars will be in your way. Every time you come by, the works of art are different. Graffiti is Art on the Move. 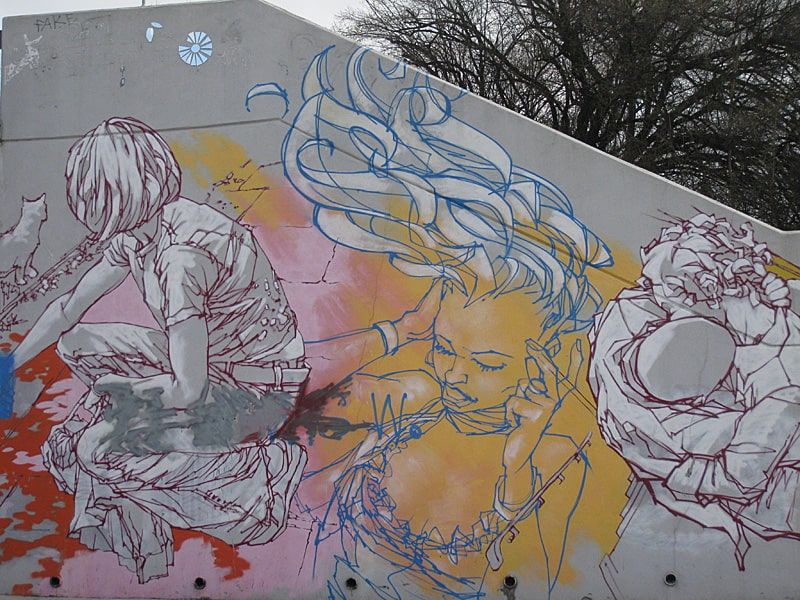 Bohumil Hrabal was a Czech writer(1914-1997). A colourful collage depicting his life and work graces the the outer wall of the Palmovka metro station on Na Hrázi Street. The mural depicts excerpts from his most famous works, his portrait, his typewriter and also his cats. The author used to live at 24 Hrázi Street, now a derelict building.
Hrabal wrote humorous, surreal stories about poor workers, eccentrics and social misfits. His writings were banned after the Soviet Union invaded Czechoslovakia in 1969. After the velvet revolution in 1989, his underground works from the 1970s were published. Many of his works have been translated into English: Closely Watched Train, I Served the King of England, To Loud a Solitude, many of his novels have film adaptations. 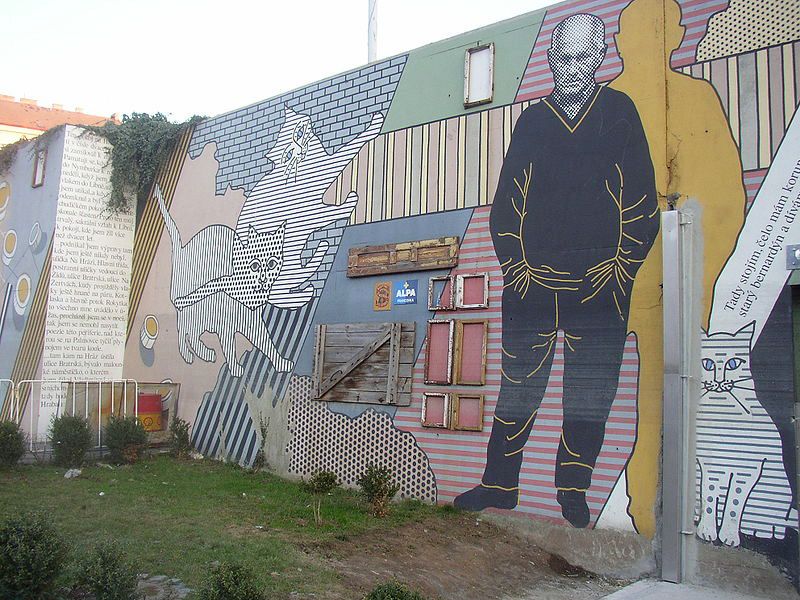